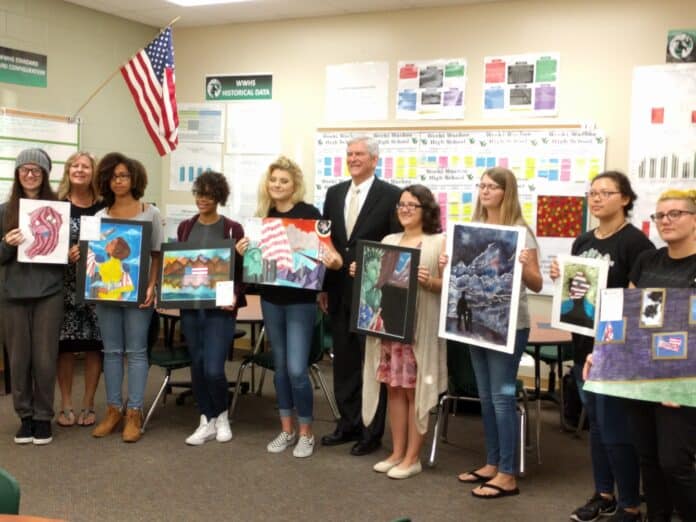 Congressman Daniel Webster is a successful small business owner, father of six, grandfather of thirteen, and active member of his church and community.

Mr. Webster graduated from Georgia Tech as an Electrical Engineer. He worked in his family’s air conditioning business, helping it to grow.

Mr. Webster ran for his first political office because his church purchased a lot next door for parking. The church was then informed that they would not be able to use this lot for parking. State laws prohibited them from using the parking lot for the church. Mr. Webster ran for state office and was elected to serve in the Florida House. He served there for several years, before running for the United States House of Representatives.

Webster says his educational background is very different than the work he does in the House of Representatives.  When he took exams, Webster explained, there was only one right answer.  As a lawmaker, the right answer is not always so clear cut.

Webster said that principles should play a bigger role in the legislative process, rather than the accumulation of power and control.

Upon introducing the bill in March of this year with Rep. Dan Lipinski (D-IL), Webster remarked, “The Innovators to Entrepreneurs Act expands on the time-tested I-Corps program through adding a course for commercialization-ready participants…  The NSF’s I-Corps program will bridge the divide between the academic world and commercialization sphere, playing a critical role in the efforts to increase innovation for all Americans.”

In May, Webster introduced the Good Samaritan Charitable Physicians Services Act which will provide a tax deduction to healthcare providers for pro-bono health services to low-income individuals and families who rely on Medicaid or CHIP.

Rep. Daniel Webster remarked, “This bill is a creative, commonsense solution that ensures our most vulnerable Americans have access to the care they need, from the doctor they choose, at a price they can afford.”

Webster along with several other Representatives introduced the Keep Families Together and Enforce the Law Act in June.  According to Webster’s office, “The bill protects the integrity of our immigration laws while ensuring that parents and children remain together during their legal proceedings.

“This bill is a commonsense solution that allows us to both enforce our laws and show compassion to families by not separating children from the loving arms of their parents,” said Webster. “It ensures the abuse of the law under ‘Catch and Release’ ends and individuals are not incentivized to use children as shields against prosecution for illegal border crossing,” he surmises.

In August, President Trump signed the Small Business Cybersecurity Bill, introduced by Webster last year.  “This bill will provide small businesses in my district, state and across the country with the tools they need to meet the threats and challenges of the modern world,” said Rep. Webster. “These small businesses are more susceptible to attacks due to the limited access to the tools they need to prepare for such an event.”

In late September, Congress passed a bill to improve long-term care disaster preparedness co-introduced by Webster and Rep. Debbie Dingell (D-Michigan). “The bill is a much needed first step to ensuring that hospitals and long-term care facilities are more resilient against natural disasters,” said Webster.

During a seven year period, Webster returned $2.9 million in taxpayer funds appropriated to run his office.  He touts, “Washington operates on the principle that if money is appropriated, it should be spent. During my service in Congress, I have exposed this flawed principle.  If every area of the federal government began intentionally cutting waste, we could get a lot closer to balancing our budget and trimming the massive burden of debt that will be inherited by our children and grandchildren.”

Webster makes frequent visits to Hernando County to meet with community and school groups as well as leaders in business and local government.