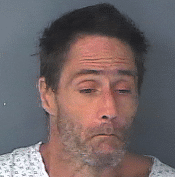 On 01-15-19 just after 5 p.m., Hernando County Sheriff’s deputies were dispatched to apartment 255 at the Spring Haven Apartments regarding a Residential Burglary.

Upon arrival, deputies met with Michelle Andre, who advised that her ex-boyfriend, James Soard, came to her apartment around 5 p.m. on 01-14-19 but she did not let him in.  Andre told deputies she believed that Soard slept in a vehicle in the parking lot overnight.

On 01-15-19 at an unknown time, Soard knocked on the door again, this time forcing his way inside when Andre went to see who was at the door.  Not wanting to fight with Soard, Andre went back to sleep.

When Andre woke up just after 4 p.m., Soard immediately began arguing with her and acting hysterical.  Andre left the apartment to avoid conflict.  When Andre returned to the apartment a short time later, she discovered that Soard had locked her out.  Andre contacted the Hernando County Sheriff’s Office.

Deputies knocked on the apartment door in an attempt to speak with Soard; he didn’t respond.  After several attempt to establish contact with Soard (through the door), deputies began hearing the sounds of Soard screaming and throwing things around the apartment.

Andre gave permission to the deputies to make entry into her apartment and the complex manager provided deputies with a key to the unit.

Deputies unlocked the door with the key but were unable to gain entry as the door had been barricaded by Soard.  Deputies forced entry into the apartment using a sledgehammer.

K-9 Deputy Greg Locke then made several announcements for anyone inside to present themselves otherwise the K-9 would be deployed.  When no one presented, K-9 Argo was deployed inside the apartment.

K-9 Argo immediately indicated that someone was present inside the master bedroom, where deputies were again confronted with a barricaded door.  Again, the door was breached and announcements made for anyone inside (the bedroom) to come out.  When no one came out, K-9 Argo was deployed inside the bedroom.

K-9 Argo immediately located Soard hiding under the bed.  K-9 Argo bit Soard and dragged him out from under the bed to awaiting deputies.  As deputies attempted to place Soard in custody, he continued to resist arrest before being taken into custody.

Soard was transported to a local hospital to be treated and medically cleared for the dog bite then transported to the Hernando County Detention Center.  Medical staff determined that Soard was under the influence of both alcohol and methamphetamine.

Deputies noted that Soard victimized the same victim, in a similar case, less than 45 days ago and that he will be held on a no bond status as he violated a pre-trial intervention program.

Photos on the HCSO FB page.