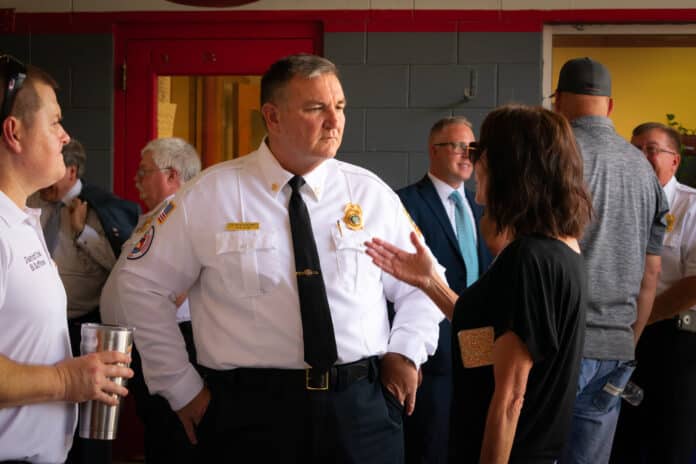 As our society advances in regards to the production of manufactured goods and materials, so advances the threat of cancer in our world.  Nowhere does this ring truer than in fire stations across the country. Word of mouth and personal experience show that almost any firefighter you speak with either has direct experience with cancer or knows someone in the line of work who has battled it.  While firefighters are equipped with protective gear to shield them from the deadly temperatures and toxins they experience, a flaw has been found in one single piece of their gear – the hood.

Firefighting ensembles, jackets, coats, and helmets specifically, were initially developed to block out both thermal exposures as well as carcinogenic threats.  The hoods, however, were found to only block 12% of the carcinogens firefighters come into contact with. As dreadful as that number may seem, some firefighters in the 1980’s did not wear hoods at all.  There has been much room for improvement in this specific area of the ensemble as some of the most permeable skin on the body is in the neck and face.

Traditional firefighter hoods would cost a department between $15 and $20 and were made of a synthetic cotton blend which absorbed many carcinogens.  The wearer would then get the hood wet either through sweating or from the spray of a firehose and the toxins from the environment would leach into the skin.  New hood technology is seeing a dramatic increase in protection (from 12% protection to 99% protection) but the three layer technology particulate hoods are extremely costly, roughly $125 per hood.  An estimated 70% of firefighters across the country are volunteers, relying on community support for their organizations. Many firehouses are not funded well enough to afford the hoods.

In comes Hoods4Heroes (H4H), a 501(c)(3) charity organization dedicated to putting those hoods in the hands of every firefighter they can.  Started by two business owners (Jeff Roundtree and Bill Hamilton) out of Clay County, FL, Hoods4Heroes is a charity which works in conjunction with local business owners and community supporters to supply the much-needed hoods.  The idea for H4H initially began after Bill conducted some research and learned about the epidemic that is cancer in fire services. Bill and Jeff took the idea for the charity to FDIC (Fire Department Instructors Conference); the world’s second-largest conference of its kind according to Bill.  There they spoke to every person they could and Bill learned that “one in three firefighters will be diagnosed with cancer in their lifetime” and they are being “diagnosed with radical stage 3 and stage 4 cancers that no one has ever seen before.” While the technology for increased protection already existed, Bill and Jeff knew they had to do something more to make these hoods accessible.

They do this by organizing public awareness and support of the fire service cancer epidemic and rallying people within communities across the state of Florida to raise money so H4H can buy the hoods.  One of those people who answered the call was Lori Eppley, a long time Brooksville resident and mother of a firefighter in Pasco County.

After hearing of the cancer threat to fire service personnel at her son’s graduation from the fire academy, Lori began doing research and came across a H4H Facebook post regarding “adopting a firefighter.”  Wishing to help protect her son from the threat of illness, Lori went to H4H’s website. While there she discovered the “adopt a station” option and began fundraising to furnish Pasco firefighters. She did not stop there.  Lori moved her efforts to Brooksville and began to solicit the help of many local business owners. She approached Merritt Funeral homes, a family she has known for many years, and they offered to donate. They also offered additional support in the form of an ad campaign of sorts on their professional social media channels all in the name of raising awareness of the H4H campaign in Brooksville.  Her efforts and those of the multiple contributors paid off as H4H presented the Brooksville Fire Department with their new hoods on Thursday of last week, June 6, 2019.

A number of the donors were in attendance on Thursday, along with Mayor Kemerer and City Manager Mark Kutney, as Bill and Jeff presented the new hoods to Fire Chief Snowberger and the rest of the Brooksville Fire Station.  Each donor was presented with a unique challenge coin (a symbolic token of gratitude) from District Chief Stan Mettinger.

To learn how to get involved and to support other fire departments nearby, please visit www.hoodsforheroes.org