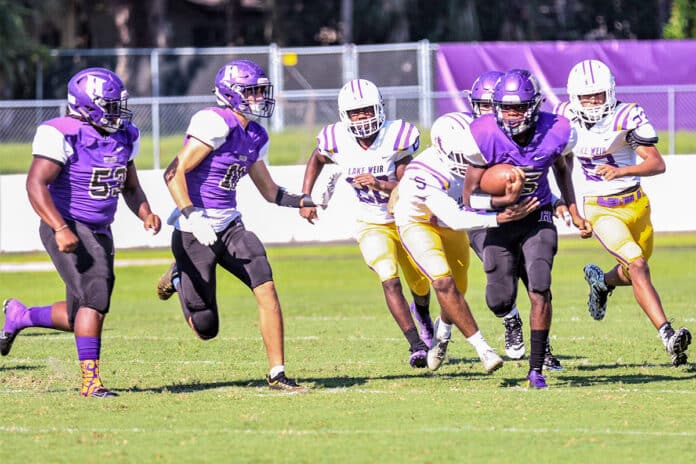 BROOKSVILLE- The first two games of the regular season haven’t exactly gone the way Hernando would’ve liked them to go.

To kickoff the season, the Leopards faced perennial state title contender Lakeland Lake Gibson and we’re defeated by the tune of 41-0 at home. Hernando was able to make things a bit more interesting in its second game when they traveled to the east coast and faced Eau Gallie on the road. The Leopards ended up falling 13-7 in a close contest and looked to finally pickup win No. 1 when they welcomed Lake Weir into town.

Hernando (1-2) was finally able to get off the winless side and picked up the team’s first win of the season when they cruised to a 51-0 victory over Lake Weir Saturday morning at Tom Fisher Stadium. The Leopards head into next Friday’s game against Crystal River with some momentum with the victory. Hernando head coach Rob Kazmier stated that his team needed the win regardless.

“It was huge,” Kazmier said about picking up the first win of 2019. “It was huge to finally get that first win off of our backs. We know we are not an 0-2 football team. We played a very good Lake Gibson team in the first week and a very good Eau Gallie team last week. Something I made sure about our schedule this year was no more starting off with running clock games. Those games didn’t do anything for us. Now that we have the tough ones out of the way, we will be ready for whatever comes our way.”

Kazmier’s brunch opened up the scoring in style, with wide receiver Jordan Williams took an end around hand off and went 40 yards to pay dirt, putting the Leopards up 6-0. Not too long after Williams’ initial score, the Leopards were on the board again when fullback JaQuan Spry took the ensuing hand-off 53 yards for the game’s second touchdown and a 13-0 advantage.

Williams would hear his name over the loudspeaker once again and ended up scoring a 55-yard score on another end around play. From there, the Leopards were in full control of the contest and the game was never in doubt heading into halftime. Hernando went into intermission up 39-0 and the game played under a running clock for half of the second quarter and the entire second half.

Williams would end the game with 95 yards rushing on two carries and both going for touchdowns. Spry had a similar stat line and ended with two attempts for 98 yards and two touchdowns. Also getting in on the action was running back Frederick Schrivens, who rushes twice for a total of 78 yards and a touchdown. Hernando amassed 349 yards of offense, with 343 coming in the ground on just 22 carries. Lake Weir ended the morning with just 92 yards of total offense.

“We made sure to get the kids in here early and focused,” Kazmier added. “We got them in here early, focused, fed them and went out and did what we expected them to do. What we did today is what we expect out of our kids. We ended up dressing 27 players today and I think all of them saw the field and that’s great. We played a good all around game and I’m happy for the kids.”