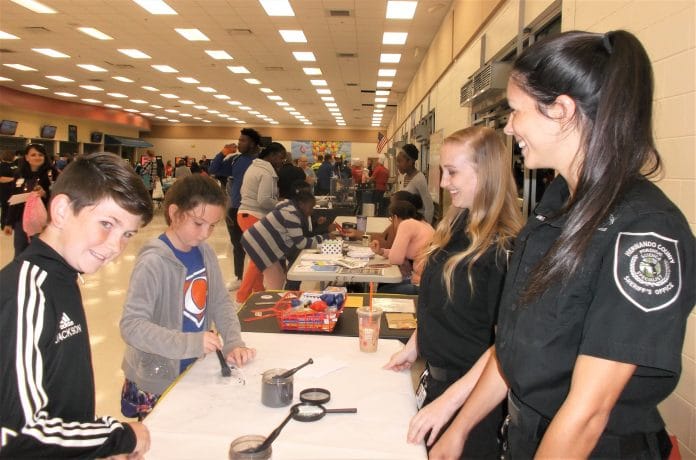 When many of us we were in school, science and math may have been considered difficult and possibly even boring. However, for students in Hernando County these subjects are considered fun and interesting because of the STEAM (Science, Technology, Engineering, Arts and Math) program that is promoted here.

On Wednesday, Nov. 13, 2019 children and their parents got to experience hands-on activities in these areas thanks to the STEAM Festival held at Nature Coast Technical High School. Five schools – Brooksville Elementary, West Hernando Middle School, Explorer K-8, Deltona Elementary and Fox Chapel Middle School – along with some local companies and organizations, set up exhibits and headed up activities. Some of the companies and organizations participating were Baycare Behavioral, Hernando County Public Library and Chinsegut Conservation Center. Children from pre-Kindergarten through eighth grade were invited to attend.

Ms. Mendoza, Coordinator of Family and Community Engagement, explained, “Our goal for the STEAM Fest was to expose children to the areas of Science, Technology, Engineering, the Arts and Math.”

“The mission of the Parent Academy is to provide training for families to better help their children academically. We also have other training in areas of social and emotional adjustment. For example, we do the Grandparents Raising Grandchildren summit that provides resources for our grandparents,” she added.

There are currently two Parent Academy community centers. One is located at Fox Chapel Middle School and one on Varsity Drive (near the school board building) just opened on Nov. 20. They house a wide variety of resources for parents and students. Classes and workshops are also held there.

Beth Zacharias, Parent Academy Liaison, stated, “At these centers we are linking parents with community organizations such as NAMI (National Alliance on Mental Illness). Regions Bank comes in and does economics for high school students.”

At Wednesday evening’s STEAM Fest, there were activities to interest and challenge children of all ages. For example, Channel 13 Fox Network meteorologist Tyler Eliasen demonstrated how hail is formed using a hair dryer and a ping pong ball.

Shannon Durling and Debbie Hubert, forensic technicians with the Hernando County Sheriff’s Office, showed how fingerprints are identified using magnetic powder. The children placed their fingertips on a sheet of white paper, then brushed the magnetic powder on the paper and the fingerprints appeared like magic.

Joe Sede, a retired teacher, was in charge of the flight simulator. Children sat in front of the simulator and got a realistic sensation of flying a jet.. One boy, whether intentional or not, even did acrobatics, making the plane fly upside down and sideways.

At another station, children got to test the aerodynamics of different objects. Prior to shooting a pom-pom and then a bottle cap from a catapult made of popsicle sticks, they estimated which one would travel the furthest.  Then, using a tape measure laid down on the floor, they measured the distance traveled by each one and compared the figures.

One of the most popular activities, judging by the crowd gathered around the table, was the butter “churning.” Heavy cream was poured into a container and then the children shook it  for several minutes until the cream solidified into butter. Afterwards they got to eat a piece of bread smeared with their own homemade butter.

For Chris Myers, a fourth grader at Brooksville Elementary School this was his favorite.

“The most fun activity tonight was making butter. I had to shake the container for about seven minutes. This is my third time coming to the STEAM Fest,” Chris remarked.

Second grader Natalie Cannon, also a Brooksville Elementary student commented, “The spray painting was the most fun thing I did here. I liked it because you got to make a picture and take it home. I also learned about weather.”

The STEAM festival showcased two very important programs in Hernando County schools. The Parent Academy is helping parents become more involved in their children’s academic life thereby creating a more successful and rewarding experience for the students. The STEAM program is teaching children that Science and Math can be fun, while Technology and Engineering aren’t just for “brainiacs.” They are also learning to appreciate the Arts, as well. Because of the STEAM program it is probable that many Hernando County students will go on to pursue careers in these fields.