HomeUncategorizedShelane Etchison of Spring Hill: One of Six 2020 Tillman Scholars from...
Uncategorized

Shelane Etchison of Spring Hill: One of Six 2020 Tillman Scholars from Florida 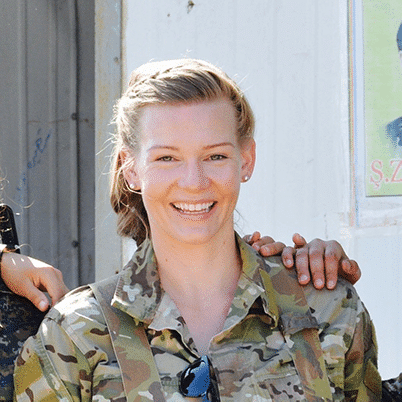 Finding Sunshine through Service seems to be the life edict of a Spring Hill native, a national military hero and Harvard scholar whose honors and accomplishments truly shine.

In the wake of the 9/11 tragedy, Shelane Etchison of Spring Hill felt summoned to serve in the armed forces. Now this local hero has been recognized by the Pat Tillman Foundation (PTF) among 60 U.S. service members, veterans and military spouses chosen as 2020 Tillman Scholars. In recognition of their exemplary service and leadership potential, Etchison and other PTF scholars will receive scholarship funding to pursue higher education and progressive service in the fields of healthcare, business, law, public service, STEM, education and the humanities.

Founded in 2008, the Tillman Scholars program supports our nation’s active duty service members, veterans and military spouses through investment in their education and professional development.

“PTF provides academic scholarships, a national network and professional development opportunities,” read a related news release, “so Tillman Scholars are empowered to make an impact at home and around the world.”

According to information found at the 2020 Tillman Scholars website, http://scholars.ptf.org, this award marks the latest in a long line of honors for Etchison, who in the wake of her graduation from the University of Central Florida was commissioned as a military police officer in the U.S. Army. Deployed to Ramadi, Iraq, she served as a platoon leader and company executive office with the military police; upon her return answering the call of the U.S. Special Operations command, which announced a pilot program to assess and select women for deployment with the 75th Ranger Regiment and Navy SEALs on combat missions in Afghanistan. This special team was intended to gather critical information from Afghan women regarding Taliban and Al Qaeda targets.

Etchison was selected for the inaugural cohort of 20 women to deploy for this program, serving in Helmand with the Army Rangers and contributing “vital information on high-value targets.” She gained a great deal of acclaim in the process, as her contributions to this essential program are profiled in the book Ashley’s War by Gayle Tzemach Lemmon.

In further service to U.S. Special Operations Forces, she was deployed as a part of a special missions unit to serve in Syria, Turkey and Europe.

During her service in Syria, working with Kurdish female fighters combating the Islamic State, Etchison cultivated the true course of her own life and future career; electing to depart the Army and “pursue opportunities to help stabilize the region via economic development.” To this end, she is now enrolled as a student at Harvard Business School and Kennedy School; determined to build a strong base of knowledge and support for her effort to bring enriching, life-sustaining economic opportunity to conflict zones.

“Our newest Tillman Scholars join a community committed to leadership through action. In these turbulent times, values-based leadership is needed more than ever. These 60 men and women exhibited that leadership throughout their military service and show incredible potential,” said Dan Futrell, CEO of PTF, in a related news release. “As a Tillman Scholar myself, I’m excited to welcome them into the community and to see them respond to the challenge that Pat’s example offers us: how will your next chapter of service make a greater impact than your last?”

“Each year, it’s inspiring to get to know a new, incredible group of people who carry forward the values and energy that Pat lived by,” said Marie Tillman, Board Chair and Co-Founder of PTF, in a related news release. “It’s our honor to support these emerging leaders as they work to make a difference in fields as diverse as education, STEM, public policy and healthcare, particularly as we navigate uncertain times.”

To date, PTF has invested more than $20 million in scholarly support and named nearly 700 Tillman Scholars at more than 100 academic institutions across the nation. Etchison stands as one of six Florida honorees this year. The Pat Tillman Foundation was named for the man who in 2002, put a promising NFL career on hold to serve his country in the Armed Forces. Following his death in 2004 while serving the 75th Ranger Regiment in Afghanistan, the Pat Tillman Foundation was founded to unite and empower “remarkable military veterans and spouses as the next generation of public and private sector leaders committed to service beyond self.”

So how does Shelane Etchison, M.P.P., M.B.A., aim to fulfill this mission? Well in her own words to the Pat Tillman Foundation, she vows “to replace combat with commerce for the sake of lasting peace.”