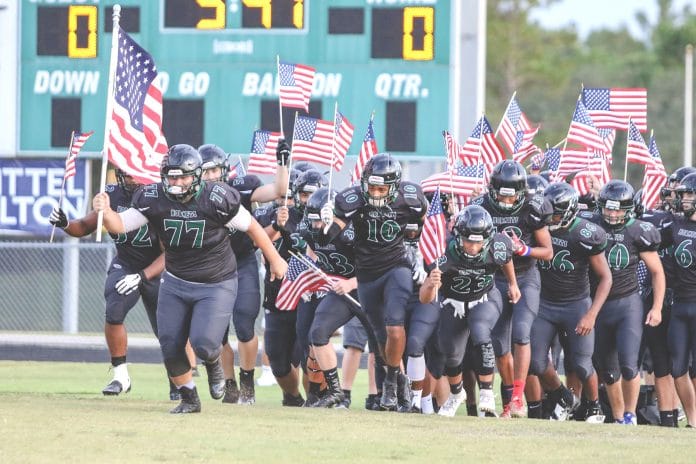 WEEKI WACHEE- Turning the corner was all that Weeki Wachee head coach Chris Cook was looking for in the 2019 season. ‘Transition’ was the keyword because of the philosophical changes made in how the Hornets played football.

From a coaching staff overhaul to how the team attacks offensively, Weeki Wachee changed just about every aspect of the team when it came to Cook’s arrival on campus. For a club that was very pass-oriented prior to Cook, he made the necessary adjustments to gear the team towards running the ball more.

Now heading into a very different 2020 season, Cook has faced many obstacles, like every high school football coach, but has the talent returning to take them head-on. Despite losing top rusher RJ Mariani to a transfer out (transferred to Springstead), the Hornets will look to Kenny Davis to take on much more of the load on offense. Davis rushed for just over 220 yards, good for second on the team.

The Hornets didn’t turn the corner until the midway point of the 2019 season when they went on the road to Holiday Anclote and were able to defeat the Sharks handily 28-6. From there, it seemed like something clicked, as the Hornets played close or won games the rest of the way. A close 14-0 loss to Crystal River and victories over rival Central and St. Petersburg Northeast helped build the case that Weeki Wachee was on their way up.

Now during uncertain times and a much more difficult stretch of trying to figure out the everyday normalities, the Hornets will try to carry over the momentum they had from the 2019 season despite the lack of a true off-season and playing spring football. 7-on-7 did not mean as much to Weeki Wachee, but being able to have a longer stretch of practices would help the Hornets, or any team for that matter, in regards to tackling.

Cook is by no means a stranger to winning football, as he ran a very successful junior varsity program over at Sebring High School before returning to his alma mater, Hardee High School, as an assistant there. Moore Haven during the 2018 campaign went 8-2 and Cook’s offense averaged nearly 300 yards and 30.5 points per game. Offensive football runs deep for Cook and doing it on the ground is his preference.

One thing the Hornets can look forward to is the possibility of making the playoffs, as they will be eligible to play in the state series. Though Weeki Wachee’s schedule is seven games and against just Citrus and Hernando County schools, the Hornets will have an opportunity in Year 2 of Cook to claim a postseason spot. The way the FHSAA has modeled this year’s postseason is finish the season and you will make the playoffs.