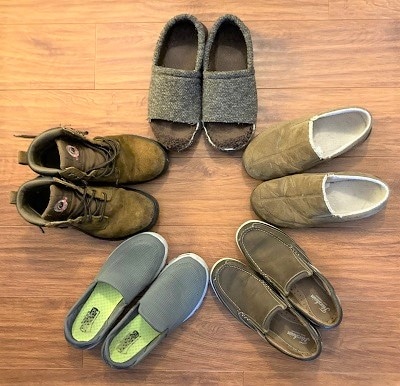 My wife’s cats, Stirfry and Tempura (she has other names for them) and my granddaughter’s cats, Gloves and Slippers (she has other names for them) are constantly testing my patience.  If I forget to snug my anti-cat cardboard (a custom fit rectangle of cardboard covered with double-sticky tape) onto the seat of my recliner before I go to bed, Slippers will sleep there.  He knows he shouldn’t, because I’ve explained it with a can of air on many mornings, but he will still do it.  Also, I’ve caught both Stirfry and Gloves on the kitchen counter drinking from plates and bowls that someone put in the sink and filled with water, instead of rinsing them off and putting them in the dishwasher.  Gloves has a habit of vomiting on my wooden floor, and I now suspect it’s because he likes the dirty water from previous human meals.  And there are the lamps they’ve broken when running into the dangling cords from end tables, and the knickknacks and framed pictures they’ve knocked over on shelves when they’re trying to rub their scent on them.  And mostly, I am appalled by the stench of their two boxes of litter that are confined in the small laundry room that opens from the kitchen.  Every morning and throughout the day I have to gargle to burn that molecular odor from the back of my throat.

To be clear, I don’t hate animals.  I just don’t want pets.  I appreciate that without zoos most people will never get to see such lifeforms alive.  And there is the argument that zoo-kept animals live longer because they are free of predators.  I understand the concepts, but animals should be in their natural environment, regardless.  And certainly none of them should reside inside a human house.  I suppose that means we humans ought to be heel-and-toeing it across savannas, digging up roots and grubs to eat, and accepting that larger carnivores might eat us now and then.  But, we of the big brains, eventually (rather slowly, I think) figured out how to avoid and combat that.  I’m sure all other animals would do the same should they evolve higher mentalities.

I have to admit, however, that the four cats infesting my abode have intrigued me with a new aspect of behavior.  Oh, I’ve had too many cats in my life to be smitten by kitten cuteness or the mad-cat antics of when they’re teens and older.  I’ve seen and dealt with all that more times than I should have.  But I’ve never observed this.

I have seven pairs of footwear.  Two are slippers that I wear only in the house.  The third is for when I go outside to check the mail or maneuver the garbage can.  The fourth is for going to stores and houses of friends and family.  The fifth is a bootish thing for working in the yard.  And two are for when I have to dress up, a loafer and a lace-up.  I don’t actually know where they are, but I’m sure I’ll find them if I need them.  But what’s on my feet is what has recently caused the cats to act strangely.

When I was younger I wore the same shoes all day, inside and out.  I put them on in the morning and took them off before taking a shower and going to bed.  But now I don’t want to trapse the outdoors into my house, and the cats act suspicious about it.  After a week of wearing one pair of slippers, I put on the other pair, a different make and model, so I can wash the first.  Normally the cats either ignore me or stare at my face as I walk by, but when I wear different footwear they watch my shoes like they’re alien feet critters that have suddenly invaded their domain.  They do the same when I carelessly wear outside shoes through the house.  They are very wary, and it might be they’re reacting to the different sounds the different soles make on carpet and wood.

Naturally I had to experiment.  Wearing other footwear, I walked toward the cats and they scurried away to behind and under furniture.  Once, wearing different shoes, I came to a dead stop in the middle of the living room and took one step toward my wife’s female cat, Tempura.  She stood and stared at my boots.  I took another step at her, and she ran to the corner beneath the tall swivel chairs below the open counter that joins the living room to the kitchen.  One more step and she hunched and hissed.

Well, I find it fascinating.  I need to get more shoes.

DeSantis hints legislation might be needed to halt vaccine-status firings