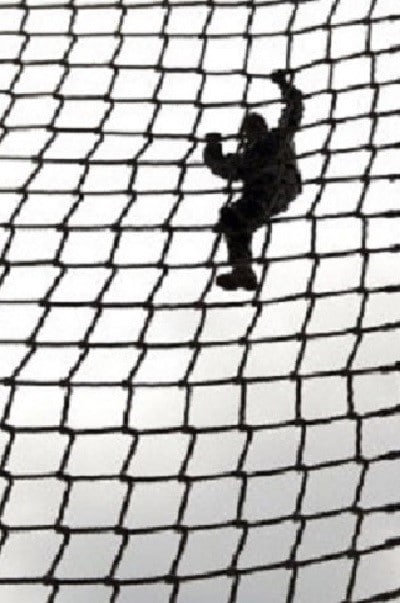 I grew up watching movies in military theaters, and before the feature started, and before the cartoons, there were newsreels, most of them about World War Two.  I was always fascinated by the scenes of troops climbing down rope ladders to board landing crafts at the start of an invasion. That looked like fun to me.

I finally got to mimic that iconic maneuver when I was in basic training.  My platoon was double-timed to a building that wasn’t a Quonset hut for a change, and naturally, we had to wait outside for a long time before we were single-filed in.  (I now suspect that the “wait” part of hurry-up-and-wait was meant to allow everyone to stop sweating and air-dry so we wouldn’t stink up the place in which we were going to sit for a while.)  Inside we were shown a five-minute clip taken from the newsreels I’d seen many times before, of soldiers climbing down a rope ladder draped against the side of a ship, but this one also showed guys getting tangled in the ladder and one that fell off.  The lecture was about maintaining three points of contact at all times when climbing: one hand and two feet, or two hands and one foot, but always three.

We were told to next run three miles down to a training area and ordered to strip down to t-shirts, fatigue pants, and boots.  The only thing there was an open three-tiered structure, each platform ten feet above the other. One of our drill sergeants pointed to the tallest guy and told him to climb.  He leaped, pulled himself up, and then he had to help the next guy, after which he carefully jumped to catch hold of the next level. One by one, and then two by two, and three by three we all helped each other make it to the top platform, thirty feet high.

On the back side of the tower was a rope ladder, just like the ones in the newsreels, and that’s how we got down.  The drill sergeants (we had two) yelled the entire time: “Remember, three points of contact! Maintain three points of contact!”  It was very distracting. And while it was fun, it was also disappointing. The real soldiers were in full combat gear. The only weight on my shoulders was a white t-shirt.

Many years later at Exwork, I sat through a CBL (which stands for Computer Based Learning, but which is now called something else) about using a ladder.  It, too, emphasized three points of contact but said nothing about what to do once you’re up and working. I know from years of ladder experience that it’s best to have five points of contact, two feet, two knees, and a hip.  If whatever I’m working on will allow it, I’ll also use an elbow and a side of ribs for a seven-pointer.

There was no such mention in the CBLs about using the scissor lift, and probably for good reason, as the monkey antics required for many tasks would surely give the OSHA folks gasping seizures.  I experimented with ten-points of contact by trying to grip the floor with my toes through the soles of my shoes, but it didn’t work. Just gave me toe cramps.

What I want to know is why isn’t there a live class or DVD lecture about taking a shower? Shouldn’t we, the recipients of discount coffee, get advice about the proper points of contact when standing in a tub or stall?  At some point, I have to wash my face, and so I can’t see if I’m still upright. It should be known that an elbow against the wall when sudsing up your head with both hands is necessary for keeping balance.  Right now I can wash my legs all the way down to my ankles by half squatting, but I have to wash my feet with my feet, using my toes like fingers. And I get toe cramps.

Eventually, I’m sure I’ll have to alter my leg-washing routine, maintaining the third point with the top of my head leaning against the front wall.  I’ll need to get some sort of padded shower cap just for that.

P.S.  More and more I prefer the activity that requires only one point of contact, my entire backside on my recliner.

Leslie Stein
Leslie Stein has over 35 years experience as a Speech-Language Pathologist working with neurologically impaired adults. She received her undergraduate and graduate degrees at the University of South Florida in Speech Pathology.
Share
Facebook
Twitter
Email
Previous articleWhere in the store is The Hernando Sun?
Next articleLocal Olive Grove offers more than just olives
RELATED ARTICLES
Uncategorized