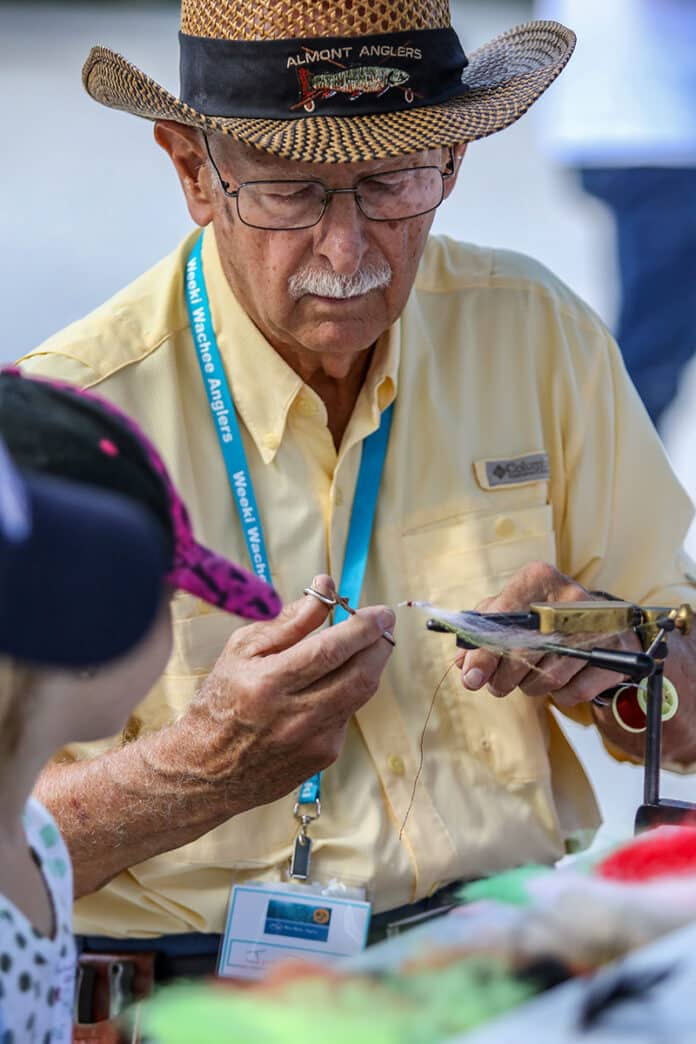 On Saturday, April 7, 2018 the Florida Fish and Wildlife Conservation Commission (FWC), Weeki Wachee Anglers Inc. & Hernando County Parks & Recreation hosted the 3rd annual free fishing clinic for 200 children 5 to 15 years old at Linda Pedersen Park. This event was coordinated with the help of the members of the Weeki Wachee Anglers Club. This club is a fishing and social club with roughly 300 members. The club was founded by the club president Ronald Auger. He had the idea to organize the children’s fishing clinic after attending the Crystal River Anglers Club fishing clinic. He wanted to bring a similar event to Hernando County where children could become educated about Florida’s marine ecosystem, learn fundamental saltwater fishing skills and learn how to be responsible citizens for our delicate marine resources. With the help of FWC the children’s clinic was started in 2016.  Free fishing clinics were established in 1996 through FWC and via funds from the Sport Fish Restoration Program. More than 52,000 children and 43,000 parents have participated since its inception. It is only through organizations like Weeki Wachee Anglers, the county parks and recreation department and FWC that this event occurs.

The children went through five skill stations: Casting, knot tying, fishing tackle, ethical angling and fish identification. As the children went through each station they were given a star, and once 5 stars were completed the children were able to receive a free rod and reel, and bait. They were then able to have the opportunity to try out their skills to catch, take a photo and release the fish at the park. Many members of the Weeki Wachee Anglers Club volunteered to help educate the children, assist in baiting and releasing the fish.  They also met before the event to put together the rods, reels, line, bobber, and hooks. All the rods were donated by FWC. There were also 25 rods donated by Precision Tackle for those children that were under 5 and did not qualify. Happy faces all around!

Hernando Beach Marina and Blue Pelican Marina donated 3 one day pontoon boat rentals, a $280 dollar value per boat. The club then raised money with a raffle for a one day free rental during their monthly meeting. At the club meeting, tickets were sold for $10 each and 330 tickets were sold. The club used that money to pay for the children’s hot dog, chips, water, a jump house and other free activities. During the fishing clinic, raffle tickets were given away and one family won the free boat rental. The club will have another raffle, in the future, for the third boat rental during a meeting. The money will then be put into the treasury and set aside for next year’s fishing clinic.

Many businesses sponsored this event including but not limited to Register Chevrolet, West Marine and Sterling Roofing, as well as, others previously mentioned. Numerous volunteer hours and donated funds helped put together a fun educational day for children and their parents.