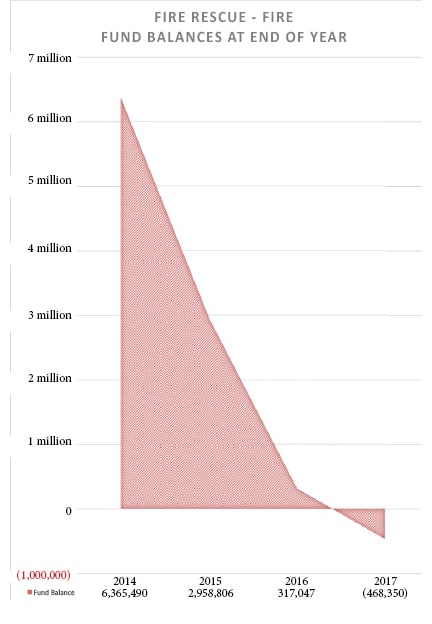 Hernando County hired the Auditors Purvis and Gray to conduct the annual financial audit- which must be completed by Florida statute.  Audit Partner Mark White explained to commissioners on Tuesday April 10, that the primary scope of the audit is the “expression of an opinion on the financial documents- that they are fairly presented in accordance with general accounting principles so they can be relied upon for the financial information that it contains.”

White remarked, “Generally, we find you all to be solid. We did note that the general fund while staying within its budget did use $2.6 million of its balance carried forward which leaves the county with a little over $20 million of fund balance in the general fund and many of you all may remember that some of that has been advanced to the fire rescue fire fund.  Approximately $7 million of that… That leaves you roughly with about $14 million.  I think if we had any financial condition comments or concerns, we would just highlight that your general fund reserves are probably on the low side at this point.”

In order to solve the fire rescue budgetary problems, Commissioners did adopt a .5 mil Fire Rescue Municipal Service Taxation Unit for FY 2017-2018, however White as well as board members agreed that come October, the county’s bills may be hard to pay.  Citizens will not have paid their tax bills yet, revitalizing the coffers.

White stated, “The tax bills don’t go out until November.  Ad valorem tax collections don’t come in until mid to late November. So that October-November period is a tight time for any county and the general fund reserves are on the low side…”

Commissioner Allocco inquired about standard policy when estimating the percent of taxable value collected while budgeting.  White said that assuming a 95% return is standard.  “The idea is you want to try to be as realistic as possible,” White stated.

Allocco further questioned Amy Gillis, the county’s new budget director on this front.  Gillis explained that the county assumed a 97% return for FY 2017, but had in the past always assumed 95%.

“Basically you’re setting yourself up for a deficit,” remarked Allocco.

Gillis explained while reviewing data from previous years- some collected near 97% and others were around 94% and she surmised that it is just dependent on the economy.

Commissioner Nicholson agreed with Allocco’s stance on not assuming greater than 95%.

Chairman Champion warned that if budgets from constitutionals come in with 4-6% increases like in the recent past- “That’s just not going to be possible.”

“I don’t know about you guys, but I’m not raising taxes.  Hopefully you guys are in the same boat with me and we need to cut,” he said.