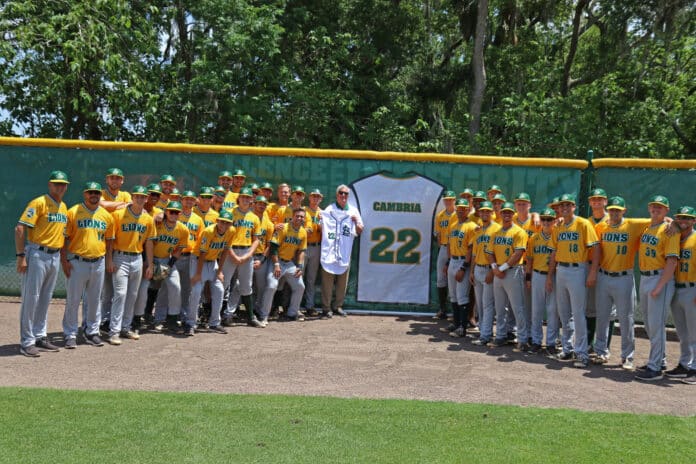 In a pregame ceremony, the Saint Leo Department of Athletics unveiled a sign saluting No. 22, which will hang on the outfield fence at Thomas B. Southard Stadium. Cambria threw the first pitch surrounded by his family, university administration, alumni, and special guests.

Cambria competed at Saint Leo from 1966-1969 as a pitcher for the then-Monarchs under coaches Bill Meyer, Norm Kaye, and Bob Sullivan. Cambria returned to Saint Leo for a two-year head coaching stint of the Monarchs from 1990-1991, in which he racked up 55 career victories in just two seasons at the helm of the program. Following his outstanding career, he was elected to the Saint Leo Athletic Hall of Fame in 1987. In 1970, Cambria was a recipient of the Abbot Marion Bowman Award and was honored with a “Fred Cambria Day” which was January 29, 1970, before going on to receive a bachelor’s degree in political science.

A native of Queens, NY, Cambria became the first Saint Leo College baseball player drafted by Major League Baseball. Chosen by the Pittsburgh Pirates in the third round of the 1969 MLB draft, Cambria was assigned to the Double-A York Pirates, where he won nine of 11 decisions with a low 2.16 ERA. In just his fourth professional start, he pitched a perfect game for York. Overall, he threw three shutouts in 14 appearances during his first season of professional baseball. The following season he won 12 of 19 decisions for the Triple-A Columbus Jets before his recall to Pittsburgh in August 1970. He went on to pitch in six games for the Pirates including starting five for the top-team in the National League East Division that season.

Following an injury, Cambria spent three seasons in the minor leagues before ending his playing career. After working in sales for Izod for several years, Cambria returned to the game he loved as the head coach at Saint Leo from 1990-1991.

Following his time at SLU, he served as a pitching coach for the San Diego Padres organization with stints at the Arizona Fall Instructional League and the Australian Professional League.

He also was the commissioner of the Atlantic Collegiate Baseball League and was selected to its Hall of Fame. Cambria, who played in the ACBL in the summer during his Saint Leo career, was the first player out of the ACBL to make it to the MLB. The ACBL honored Cambria by electing him into its Hall of Fame in 1991. Cambria took over as commissioner in 2005. In April of 2013, the Hamptons Collegiate Baseball League (HCBL) named Cambria as its first commissioner.

(Submitted by Saint Leo University, adapted for this publication)