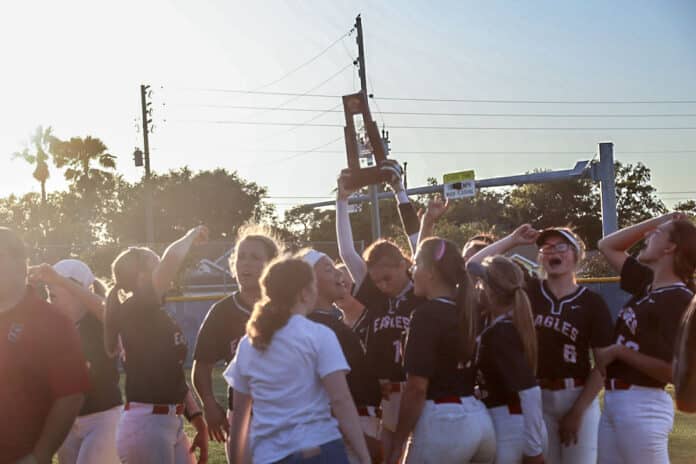 The bleachers are filled to capacity on April 27, 2018 at the Stead. Fans are eager to see the 6A-6 District Softball Championship game between Springstead Eagles and Crystal River Pirates.  Both teams came to battle it out for the win.

Pitcher for the Stead is Sr. Kayla Cruz and behind home plate is catcher Paige Pfent. A duo to be reckoned with.  Let’s Play Ball!!

1st inning, Crystal River gets a fly to left field, which is caught- 1 out. A line drive to 2nd baseman Madison Dicono caught and threw runner out on first, second out. Paige Pfent watches runner on 1st.  Third Pirate goes up to bat, line drives down first base line where Hannah Rizzuto picks it up and gets the third out.

Bottom of 1st Springstead up to bat, starting off with Emily Kolwicz, 4 balls walked to first.  Mariah Galhouse steps up to the plate, hits a foul, hits another foul just over first base. Galhouse swung out- out 1.  Paige Pfent up next- got the second out when the blue called out the third strike.  Fourth batter up is Kayla Cruz, the Pirates pass on pitching to Cruz, Cruz walks to first,  Audrey Selby subs for Cruz as a runner. Stead has runners on first and second.  Raquel Camuglia gets up to bat, Camuglia left runners on base as she strikes out, making it the third out.

Bottom of the 2nd, Springstead up to bat. Jenna Ryan struck out, Hannah Rizzuto bunted ball, got thrown out at first.

Top of the 3rd inning, Cruz going strong at pitching, strikes out first batter. Second batter gets a base hit to left field, the throw to second base misses, right fielder picks up and throws back to second. Third batter up, line drive out to center field. Center field throws to second- runner is safe. The Pirates have runner on third. Pirates pop up to shortstop, caught- out 2.  Fifth batter pops up to second, caught out 3. One run by pirates.

Bottom of 3rd. Springstead Madison Dicono up to bat, strike out. Back to the top of lineup, Emily Kolwicz is up, and is struck out. Mariah Galhouse popped up at second which was dropped, and got on first. Paige Pfent came up to bat and a third strike was called. Runner was left on first base.

Top of the 4th inning. Cruz struck out batter. Second baseman Madison Dicono caught a pop fly and line drive to get the second and third out.

Bottom of the 4th, Cruz steps up to the plate and again the Pirates won’t pitch to her. They walk her for the second time. Raquel Camuglia steps up and goes down swinging. Jenna Ryan’s fly ball is caught in right field and Delaney Woodall bunts and is called out at first.

Top of the 5th inning for the Pirates it was 3 up 3 out. Cruz strikes out 2 batters, 1 batter line drives to shortstop Mariah Galhouse who throws runner out on first.

Bottom of the 5th. Springstead also 3 up 3 out. Hannah Rizzuto bunts and is out on first. Audrey Selby hits grounder to second baseman, out on first. Emily Kolwicz goes down swinging.

Top of the 6th inning. Game is coming to an end. Something has to happen for Springstead to take this win for the district. Pirates up to bat once again. First batter hits a grounder to shortstop and is safe on first. Second batter bunts, Paige Pfent goes into action and throws runner out on first, while another Pirate advances to second. Third batter line drives right down the center- infield misses, Springstead center fielder throws home to stop runner on third. Paige Pfent then throws to second to stop runner but was missed and the Pirate runner came in making their second run. Pirates continue to step up to the plate, another line drive to Madison Dicono, and throws batter out at first. Shortstop Mariah Galhouse picked up a grounder and puts runner out on first.

Bottom of the 6th-  It’s Springstead up to bat. Tension is up- let’s get it girls. You got this. Mariah Galhouse up to bat, grounder to center field gets on first. Up next is Paige Pfent, base hit. Mariah on second and Paige on first. Cruz is up to bat, again for the third time the Pirates passes on Cruz and loads up the bases. Raquel Camuglia up and strikes out. Jenna Ryan was walked, and the Stead has 1 run. Next batter Delaney Woodall was also walked, the Stead has the second run. Game is tied. Now it gets really tense, Hannah Rizzuto gets the base hit which was missed by the second baseman. Pirates had Jenna Ryan and Delaney Woodall in hotboxes.  Pirates got Jenna Ryan out on third. The Stead got a third run in all the confusion.  Madison Dicono gets up to bat and hits ball to shortstop, shortstop throws runner out on second making it the Stead’s third out.

Top of the 7th inning. Springstead is ahead by 1 run, the Pirates have to get at least 1 to tie the game, 2 to win. Everyone is on the edge of their seats. The girls have to hold the Pirates to take the win. Alright here we go, the first batter for the Pirates is at the plate. Batter gets a base hit and gets on first. Second batter gets up to the plate. Pops up to Madison Dicono, ball is caught- 1 out, then Dicono turns and throws the runner on first out, 2 outs. Madison Dicono makes a beautiful double play. All the Eagles need is one more out to win the game. Third batter is up, batter hits ball down third which Emily Kolwicz picks it up and throws the runner out on first.  Cheers erupt with that third out, the Springstead Eagles take the 6A-6 District Championship.