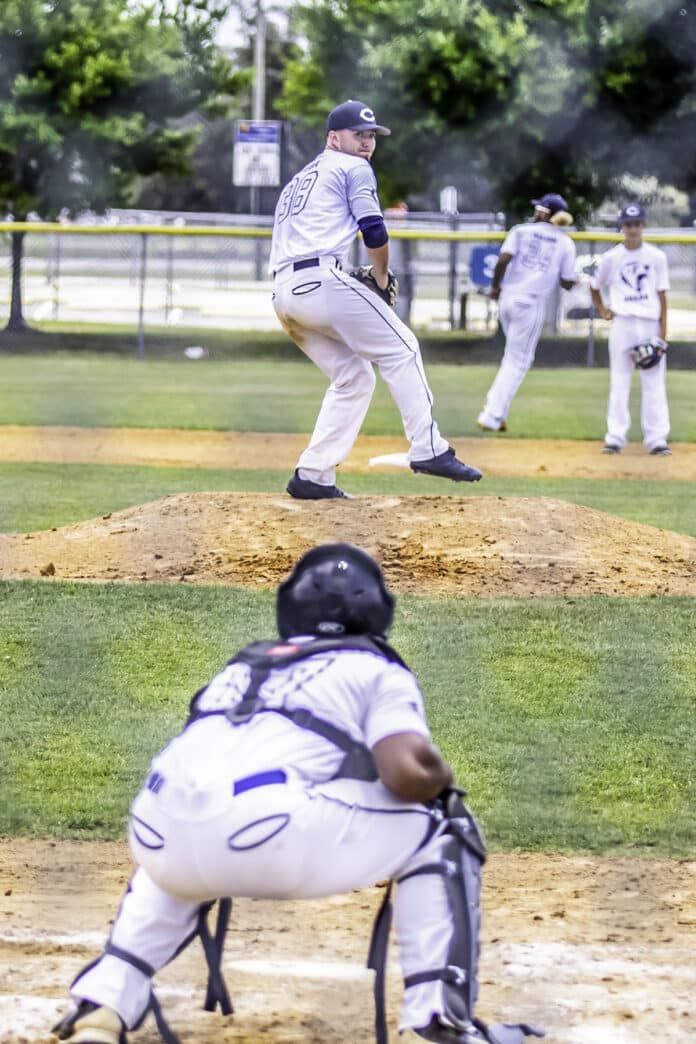 It’s May 1, 2018, a great day to play ball here at Nature Coast High School. The sun is shining and the breeze feels just right. But, it might be a problem for the batters, they will have to hit right into the wind. There is a moment of silence for the shooting victims and families of the Stoneman Douglas High School February 14, 2018 shooting. Hats off for the National Anthem and now they are ready to play ball!! Central High Schools take on Hudson High School today for a neutral playoff game. The Bears will take the field first, pitcher warms up as the Cobra batter waits on deck. Alright here we go, batter up!!

Cobras’ first batter is Luis Ortiz, hits a fly out to right field. Caught- 1 out. Second batter up for the Cobras’ Pat Coleman hits a line drive down third and thrown out on first, 2nd out. Scott Meitzier steps up to plate hit a foul down third and a foul fly caught by Bears Pedro Moss, 3rd out.

Lefty Matthew Voda steps up to the plate first for the Bears and he is walked. Trevor Adler is up to bat. Pitcher throws, catcher misses it and Voda steals second. Fourth ball thrown to Adler, he walks. Bears have a runner on first and second base. Another pitch and ball gets loose from catcher, Bears runners advance to second and third bases. Jonathan Allion hits drive to second baseman which throws to home to stop the run. Runner at home is safe and Allion gets on first. Bears have 1 run. Nathanael Mota is up, he hits to the shortstop and gets thrown out at first. Second run comes in for the Bears. Pedro Moss goes down swinging.

Justin Fribbley steps to the plate first, hits a shot over left field player and Fribbley was able to step on second base. Number 3 steps up and line drives down third but thrown out at first, Fribbley advances to third. Rashaad Boyce drives a ball just out of the reach of cobra shortstop, he gets to step on first. Fribbley comes in to make another run for the bears.  Back at the top of the lineup Matthew Voda is walked to first and Boyce goes to second. Trevor Adler hits a hard ball straight at second caught, and threw to first and Voda out. Nice double play by the Cobras.

Johnny Brentano steps up to the plate, hits down third and thrown out at first. Kyle Kolodziej hits another straight down third, takes a wild hop and Kolodziej gets on first. Luis Ortiz pops up and Bears’ pitcher hesitates, holds Brentano on third, then throws Ortiz out on first. Pat Coleman was walked to first. Cobras have a runner on first and third. Scott Meltzler tried to hang in there with a grounder down third and foul fly ball. The third strike came across the plate and it made 3 outs, leaving runners on first and third.

Jonathan Allion, foul pop up catcher and third baseman collided to catch the ball. Tyler Adler was hit by the cobra pitcher and sent to first base. Nathanael Mota walked, runners are now on first and second.  Cobra coach Michael Vavasis comes out to the mound, the whole Cobra team came in for the meet up. Pedro Moss steps up to plate, pitcher throws a wild pitch, catcher retrieves the ball but runners advance. Moss was walked. Cobras changed up pitchers to Danny Williams. Justin Fribbley takes on the new pitcher, line drives down third and RBI, run 4 for the Bears and bases loaded.  Number 3 is hit by the pitcher sent to first and Bears got the fifth run. Bases still loaded. Rashadd Boyce walked, run 6. Another Cobra meeting on the mound. Exchange of pitchers, Kyle Kolodziej comes in. Matthew Voda swings, misses and catcher throws out the third base runner. 3 Outs.

Cobra Sam Roush sends a fly to left, dropped base hit. Dom Silverthorne steps up to the plate, he is walked. Runners are now on  first and second. Bears’ coach Sorrentino comes out to the mound, talks with his pitcher. LJ Pratt steps up. Wild pitch runners advance to third and second, Pratt hits to left field. Cobras’ first run comes in. Levi Wolhfiel got a base hit, Cobras’ second run. Johnny Brentano was hit by a wild pitch, ball gets away from catcher and the third run comes in. Kyle Kolodziej drives it down third and was thrown out. Cobras’ have runners on third and first. Luis Ortiz fly to right field and caught second out, run four came in. Runner on first steals second and third. Pat Coleman steps up and is walked to first.  Scott Meltzler steps up to bat, Bears’ pitcher watching first base runner leading off and beams it to first, Cobras’ third out.

Trevor Adler is first to come to the plate, base hit. Jonathan Allion base hit, runners now on first and second. Tyler Adler gets on base. Nathanael Mota pops it up and was dropped when second baseman and right fielder collided. Pedro Moss hits fly to right field, it’s caught and runner comes in for the 7th run for the bears. Justin Fribbley hits to left field, run 8. Number 3’s fly ball is out in center field.

Scott Meitzler slams it out to center field to the fence, might have been a homer if it wasn’t for the strong breeze. Meitzler on second. Sam Roush gets a base hit to center, Meitzler advances to third. Dom Silverthorne base hit to right field, Meitzler gives the Cobras’ their 5th run. LJ Pratt hits- action goes into play, runner to second is out. Pratt is safe on first and run 6 for the Cobras. Levi Wolhfiel hits a line drive to pitcher. Bears’ pitcher throws to second and a throws goes to first for a double play. 3 outs.

Rashaad Boyce hits down first and is taken out at first. Matthew Voda flys out to center and the ball is caught. Trevor Adler grounder to shortstop, thrown out on first for the 3rd out.

Lefty Jonathan Allion comes to the plate and slams it to right field and it is GONE. Bears’ 9th run.

Tyler Adlier hit by pitch, goes to first.  Cobras comes out to mound and exchanges pitcher to Sam Roush.

Nathanael Mota steps up to Roush and hits down third baseline, base hit. Pedro Moss gets base hit, Mota out on second. Justin Fribbley steps up. Wild pitch! Cobra catcher jumps into action and slides against the fence to get ball. Runner advances bases. Fribbley hits a fly to right field, 2 runners came in. Fribbley slides and is safe on third. Ryan Ebberup struck out. Rashaad Boyce struck out. Fribbley was picked off by the catcher on third. 3 Outs.

Cobras have one more chance to tie up the game or take the win. Heading into the Top of the 7th.

Bears bring in a new pitcher, Jonathan Allion.  I like his style it’s like he dances on the mound. Double step after the pitch, shoulders and left leg movements before he pitches.

Pat Coleman faces Allion for the first time on mound and struck out. Out 1. Scott Meitzler hits to short stop and gets thrown out on first. Out number 2. Sam Roush hit it to the pitcher, it bounces off his glove to the shortstop, thrown to first Roush is safe. Levi Wolhfiel hits down third goes into left field. Left field throws to third, runner is safe. Bears have runners on second and third. LJ Pratt steps up and strikes out leaving 2 runners on base. And the Central Bears win the game with 11 runs to the Cobras’ 6 runs.

Have to give kudos to both teams- catchers for the work out they got in this game, with all the wild pitches. Sliding into fences and jumps from a squatting position to straight up in the air to catch that ball.

Note: Apologies for not having Name of  #3 which was a sub runner for Bears’ pitcher.