It’s sea turtle nesting season and you can help 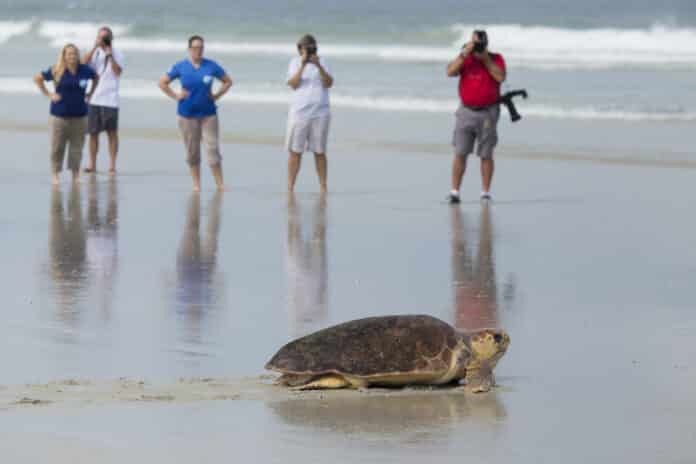 GAINESVILLE, Fla. — People aren’t the only ones headed to Florida’s beaches right now. May 1 marks the official start of the sea turtle nesting season, and beachgoers can take steps to help turtles be successful, said Maia McGuire, a Sea Grant agent with the University of Florida’s Institute of Food and Agricultural Sciences Extension.

“Sea turtles are coming to beaches to lay their eggs, which they bury high up on the beach. All sea turtle species that are found in U.S. waters are federally listed as either threatened or endangered. Three of these sea turtle species nest regularly in Florida, so making sure the newborn turtles are able to reach the ocean helps conserve these species,” said McGuire, who coauthored a book on sea turtles for young readers called “One in a Thousand: Those Amazing Sea Turtles.”

Here are a few tips to help give sea turtles safe passage to the water.

Mother sea turtles coming ashore have a hard road ahead of them, and interactions with humans make it even harder.

“Because all sea turtles are protected, people need to be very careful not to do anything that might interfere with their behavior. If people see an adult turtle crawling up or down the beach, they should leave it alone,” McGuire said.

“If people are concerned about the turtle — if it seems to be injured or dead — they should contact the Florida Fish and Wildlife Conservation Commission,” McGuire said.

Because of their small size and the threat of predators, newborn sea turtles also have a difficult journey over the sand and to the ocean. “If people spot sea turtle hatchlings emerging from a nest, they should keep other people, and especially pets, out of the baby turtles’ way.”

Adult turtles typically lay their eggs at night, McGuire said. “Shining lights on or near the turtle could disturb the turtle and cause it to abandon its nesting efforts.”

When baby sea turtles emerge from the nest, their number one goal is to get to the ocean as fast as they can, McGuire said.

Turtles usually leave the nest at night and orient themselves to the ocean by following the light reflected off the water.

“If there are lights that shine onto the beach, the baby turtles might head in the wrong direction and put themselves in danger,” McGuire explained. “Reducing light around beaches helps ensure the turtles crawl toward the sea.”

Beach visitors can make the journey from the nest to the ocean easier for nesting mother turtles and their hatchlings by clearing the way for them, McGuire said.

“The fewer obstacles the turtles encounter, the easier it is for them to get to and from the water. So when you leave the beach, remove beach chairs and umbrellas, and level sand moved around by building sandcastles or digging holes,” she said.

“One in a Thousand: Those Amazing Sea Turtles” is available for purchase at the UF/IFAS Extension Bookstore website (ifasbooks.ifas.ufl.edu), where you will also find a poster illustrating how you can help during nesting season.