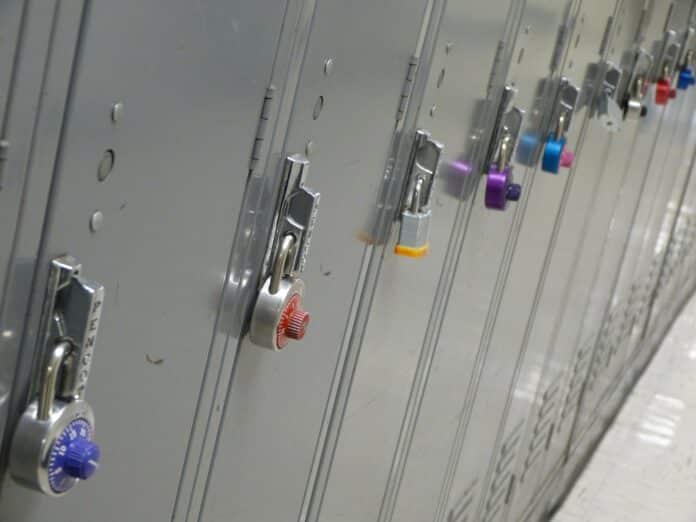 On Monday, May 21, 2018, the Hernando County School Board met with the Board of County Commissioners (BOCC) and Hernando County Sheriff Al Nienhuis.  The special Interlocal Governmental Meeting’s purpose was to bring the two boards together with the primary focus of finding funds to comply with new school security mandates, which are described in Senate Bill (SB) 7026.  The school district estimates the cost of compliance to begin at $22-million, and a state grant up to $720,375 is available to the county.

Following Governor Rick Scott’s signature of the bill on March 9, 2018, the Office of Safe Schools was created to address the top three issues pertaining to school shootings; student mental health, physical hardening of school structures and changes to security practices within.

State Representative Blaise Ingoglia was also in attendance, and spoke about particular facets of school funding.  Ingoglia commended both boards on assembling the Interlocal Meeting, and recommended future meetings annually or semi-annually.   He went on to say that he voted against SB 7026 “for a myriad of reasons,” citing primarily his concerns with the second amendment and the ensuing funding problems that he came to discuss.

Since tax increases are being considered, Assistant County Administrator Ron Pianta of Hernando County began the meeting by addressing the population of the county.  Showing figures from the economic “boom and bust” that marked the beginning of the 21st century, Pianta reviewed the recession of 2007-2009. Following the official end of the “bust,” some communities took longer to recover.  Hernando didn’t begin to see recovery until 2015.

Pianta cautioned that although the county is starting to see a stable and lasting growth trend, it is never known how long it will last.  The population of the county as of April 2017 was 181,878. Estimating growth by approximately 2% per year, the population is expected to climb to 236,200 by 2040.   Recognizing mistakes of the past, Pianta said that the prevention of making those mistakes again would depend on good decision-making going forward.

Several new developments are planned for the county, namely Spring Center, which will bring 3000 new residences, and Hickory Hill in the SR 50 / I 75 area, which is expected to expand Hernando county by 9000-10,000 new homes.  Pianta gave an overview of the lifecycle of a development project to answer questions from the members of the school board.

Economic Development Manager Valerie Pianta acquainted the School Board and other attendees with how her department creates opportunities for businesses to succeed.   She explained, “A business uses about 35 cents of every dollar that they generate in taxes, and a resident uses about $1.30 for every dollar that they generate in taxes.  It’s important that we balance our tax base, and not balance it completely on our residents.”

Ms. Pianta went on to report the increases in created jobs and retained jobs in the county in recent years.  Quality of life matters is another focus of the Department of Economic Development. Such issues as housing affordability, availability of skilled labor, access to roadways and recreation opportunities are topics often cited when individuals and businesses consider moving to Hernando County.

Commissioner John Allocco said of the future demographics of people moving into Hernando County, “We want to be attractive to our next generation of students (returning to work in the county). But we have to know what’s attractive to them.”  Alloco, who runs a physical therapy practice, stated that he has difficulty recruiting young physical therapists because the county doesn’t have enough apartments or multi-family residences. Young professionals more often choose to rent an apartment with plenty of recreation and amenities, rather than buy a home.

Members of both boards discussed housing, recreation and bringing business to the area that would be attractive to prospective residents, such as a hotel near the Brooksville – Tampa Regional Airport, and more “sit-down” restaurants.

The itemized list of other changes and costs to meet the state mandate has been divided into three phases, with the immediate needs appearing in phase one, and long-term requirements designated as phase 3.  The first phase is estimated to cost $6.2-million, which consists of securing access points and surveillance.

Phase 2 is still under development, and expected to cost $8.8-million.  The third phase will expand and enhance security implementations over the longer term and is expected to cost $23.6-million to complete.  The specific items were not discussed in-depth, due to time constraints, and also to protect students and current personnel. A “Shade Session” will be held on May 29, 2018, where the school board will discuss the confidential portions.

The grant available to the county which could be any amount up to $720,375, is specifically earmarked for capital outlay and physical security.  If awarded, the funds will be available January 15, 2019.

Currently, the school district spends over 81.14% of its budget on salaries and benefits.  The remainder is spent on everything from utilities to office supplies. For the next school year, the district is expecting an increase in the number of students.  Martin reported that a new funding mechanism will add $2.7 million to the budget to account for the increase in number of students.

Martin also reported that part of the new mandate for improved mental health services will bring in state funding of $590,000, however there will be restrictions on how that money can be used.

If the millage rate is increased for two years, the HCSB can use funds for capital or operating expenses.  In order to increase the rate for four years, the board can use the funds for operational expenses only. Other funding sources rely on the increase of sales tax by ½ to 1 cent.

According to Director of Finance & Purchasing Joyce McIntyre, extending the ½ cent sales tax over ten years will yield roughly $10.3-million per year, totalling around $103-million. Considering millage rate increases, a 1 mill increase over four years would result in $38-million, and 2 mills would yield $76-million. It would be possible to renew a two-year millage rate at the end of the term, to allow for spending on capital expenses, which would fall under the purview of the school safety initiative.

Restoring impact fees to 2013 rates, as well as offering city bus passes to high school student to offset transportation costs to the school board were also discussed.

Another school shooting took place in Santa Fe, Texas just three days before this Interlocal Meeting took place.  While millage rates, sales taxes and budgets are studied, the logistics of deterring an active school shooter seems to be at the forefront of concern.

Commissioners John Allocco and Jeff Holcomb questioned the wisdom of hardening existing school structures. Alloco’s concern is that the layout of some campuses are simply not able to provide enough security to thwart unlawful entry.  Holcomb described how military bases – known to have very high levels of security – have secure perimeters that protect the internal structures and people. Commissioner Wayne Dukes, an Air Force veteran concurred.

School board chairman Mark Johnson said part of the solution lies in the increased access to mental healthcare.  Under SB 7026, it will be easier to “identify people who have issues, and correct that behavior before they act out.”

The school board will convene on May 29, 2018 in a private “Shade Session” to discuss safety remedies that will be kept from the public in order to protect students, staff and faculty.