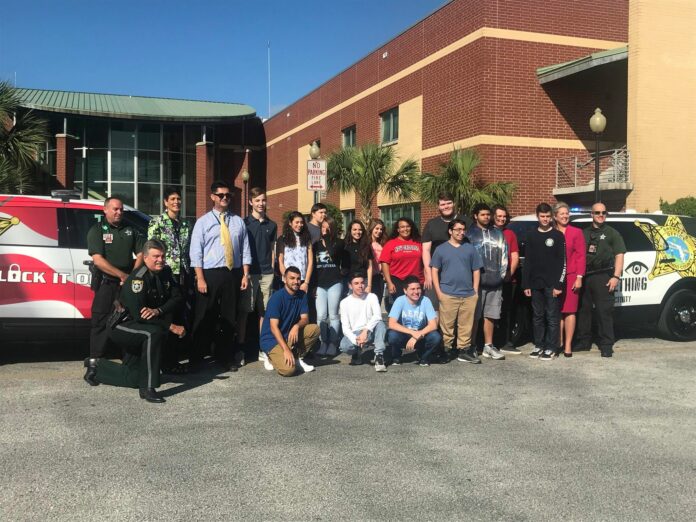 Spring Hill, FL- “…Sometimes we think that kids aren’t going to be able to do the as good a job as adults but I’m happy to report I was wrong,” Sheriff Al Nienhuis admitted in front of Nature Coast Technical High School.

He was referring to the spectacular new designs wrapped on two deputy vehicles, courtesy of NCT’s Graphic Arts class. The finished product of the designs on the deputy vehicles were revealed to the public last Wednesday morning at 9AM at NCT.

Deputy Mike Woodward, a Community Policing Deputy with the Hernando County Sheriff’s Office, had been brainstorming creative ways to spread crime prevention messages throughout our community. He had the idea, but lacked a team to actually make the idea a reality. While he was patrolling the halls of the high school, he noticed there was a Graphic Arts Class. Woodward knew that the class was just the avenue he had been looking for to design the vehicle wraps.

Woodward’s idea was to wrap messages on the deputy vehicles patrolling the county to get exposure for helpful crime prevention phrases.   The phrases he decided to place on the vehicles were “Lock it or Lose it” and “If You See Something, Say Something.”

The messages were phrases that had been used in media releases from the Sheriff’s Office, as well as their social media, and other outlets and events. They had remained practically ineffective. The Sheriff’s Office had been noticing an increase in vehicle burglaries over the course of the past few months. They knew it was time to change their crime prevention methods. When Woodward presented the idea to his captain, it was met with hearty approval.

Deputy Woodward was coincidentally working at the school as a temporary replacement for the School Resource Officer, who was away for three weeks due to a special assignment.

“I didn’t know the layout of the school because I’m not an SRO.  So I was going through the hallways and learning layout of the school when I came across Mr. Barlow’s Graphic Arts Class,” Deputy Woodward explained.  Before he came across the graphics arts class, the deputy explained, “I thought I was at a standstill at that point because I couldn’t do the project because I was there [at NCT].  He continued, “But when I saw them (the graphics arts class)- who better to create these designs for the vehicles than young minds and great imaginations?”

The idea had first been presented to the class’s teacher, Mr. Trevor Barlow, who agreed to the project with enthusiasm.

After Deputy Woodward had left the designs to the creative energy of the graphic arts class, all he could do was wait and hope for the best.

It was quite the time crunch as the school year was abruptly coming to a close. The students only had two weeks to come up with designs, present it to Deputy Woodword, let him choose, then give the designs to a local company to wrap the deputy vehicles.

“We worked during class, during lunch, hour, and after school. Everyone had to put in the effort, hard work, and research, because no one knew whose designs would be selected,” Trevor Barlow said of his class’ dedication to the project.

Once the designs were complete, all that was left to do was select a design and present it to IllusionsGFX Custom Graphics & Printing, the local business which wrapped the vehicles and professionally completed the project.

Louis Diaz, a senior at NCT, was the brains behind the winning designs. After he graduates high school form Nature Coast, Diaz plans to go to PHSC and study Graphic Design, while he works for Illusion. The company was so impressed with his designs and artistic abilities that they had offered the high schooler a job.

“Graphic Arts is definitely a passion of mine,” said Diaz. Diaz’s passion was evident in his bright smile as he said the previous words. “I’m excited to start working for Illusion and to see where my future leads.”

The newly wrapped deputy vehicles were revealed to the public, as well as Trevor Barlow and his graphic arts class, in front of the NCT administration building, on the morning of May 23.

At the end of the unveiling event, Sheriff Nienhuis gave a few closing remarks.