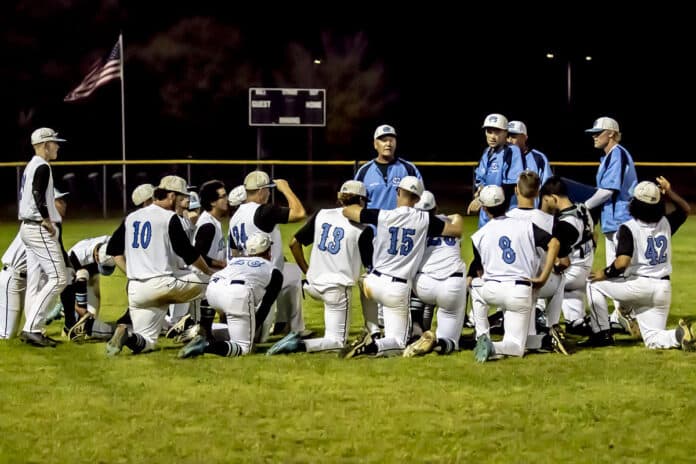 On Thursday May 31, 2018 Nature Coast Technical baseball team made it to the 2018 FHSAA 5A State Semi-Finals game #1. Bolles Bulldogs vs Nature Coast Sharks. This time I’m giving you the play by play from my home watching it on live stream. My dogs looked at me kinda weird as I cheered throughout the game. The Hernando Sun congratulates the Sharks for making it to state.

Now on with the game play by play. Play Ball…. Sharks are up first to bat.

First to bat is Zach Funkhouser, base hit up the center and on 1st. Way to start it off.

JP Gates steps up next and hits to Bulldog shortstop Max Ferguson. Ferguson throws Zach Funkhouser out at second, tried for the double but Gates safe on first. 1 Out. Brandon Riera steps into the batter’s box, in the meantime Bulldog pitcher Hunter tries to take out Gates- out on first. Brandon Riera hits again to Bulldog shortstop, but this time the Bulldogs complete the double play making 3 outs.

For the Bolles Max Ferguson was first up to bat, he hit out to right field. Sharks right fielder over throws second and Ferguson extends his hit to a double. Mac Forrester stepped into the batter’s box and stepped out- striking out, 1 out. Hunter Barco steps up and makes a shot to left center, got an RBI and got on third base. Paul Kuehn was up and hit to right field, caught by Funkhouser making two outs. Funkhouser misses, stepped too late to get the ball home to stop Barco from making the second run for the Bolles. Bryson Kirksey steps up to bat with two outs, and strikes out to make three outs.

Brandon Frangione is up first this inning and hits a shallow right field fly, caught by Jack Brady. 1 out. Brennan Cross hits shallow fly and caught by second baseman Jack Brady. 2 outs. Chase Davis steps in the batter’s box with two outs against the Sharks, and goes down swinging making three outs. Three up, Three down for the Sharks.

Cal Henrichsen is first up for the Bolles, JP Gates strikes out Henrichsen- shuts him down. 1 out. Will Shepherd hits to right field for a base hit. JP Gates tries to pick Shepherd off on first a couple times with no luck.  Jack Brady steps into the batter’s box next. Gates throws pitch and Shepherd goes for the steal to second, catcher Brandon Riera throws to second and it goes into center field. Shepherd safe. Gates in constant watch of Shepherd. Gates throws pitch and it takes a bounce and Shepherd is stealing third. Catcher Riera catches the bounce, throws to third but it goes out to left field, Shepherd runs home making the third run for the Bulldogs. Sharks need to settle down, Gates focuses on Brady. Gates racked up on balls with a 3 – 2 count to Brady and Brady is walked to first. Jackson Mayo is up, Gates throws the pitch to Mayo and Brady is stealing second, catcher Brandon Riera takes the throw to second to Zeth Rodriguez to make the second out. Full count against Mayo, and is walked to first. Next up is Max Ferguson with two outs against the Bolles. Gates throws and Mayo steals second, Riera throws to second and Zeth Rodriguez takes Mayo out to make three outs.

Bulldogs start off with the top of their lineup with Max Ferguson. Ferguson smoked it out to right center and gets a double. Next up Mac Forrester, bunts to move Ferguson to third. Gates picks up the bunt and fires to first to get Forrester out on first. Lefty Hunter Barco is in the batter’s box, hits out to center for the second out while a run comes in. Making the Bolles forth run. Paul Kuehn is up and pops up in the infield and caught by Chase Davis making three outs.

Bryson Kirksey hits out to right center field, Sharks Zach Funkhouser comes in sliding to catch the first out against the Bolles. Cal Henrichsen hit up to first for the second out. Will Shepherd was walked to first. Jack Brady steps up to the plate, grounds to JP Gates and is thrown out at first making third out.

Going into the top of the fifth inning Bulldogs with 4 and Sharks with 1 run. The first up this inning for the Sharks is Chase Davis. Davis hits out to right field caught by Mac Forrester for the first out. Sharks Jonathan McMath steps up to the plate and is walked to first.  Kevin Funkhouser grounded to second and McMath is taken out for the second out. Kevin Funkhouser on first. Zeth Rodriguez grounds to shortstop and Funkhouser is thrown out on second for the third out for this inning.

Jackson Mayo up for the Bolles, hits out to center field which is caught by Brandon Frangione making the first out. Top of the lineup Max Ferguson steps up, hits shallow to right center field for a base hit. Mac Forrester is struck out by Gates for the second out. Hunter Barco is walked to first, with Ferguson on second. With Paul Kuehn stepping into the box and hitting to right field as Zach Funkhouser catching the ball for the third out.

This inning Sharks start off with the top of the lineup- Zach Funkhouser.  Funkhouser battles with Hunter Barco but goes down swinging for the first out. JP Gates hits to center field and is caught by Bryson Kirksey for second out. Brandon Riera hits grounder to to second and thrown out at first, making third out.

Sharks keeping the Bulldogs to a 3 run lead, but need to step it up to either tie or more to keep this game going. Brandon Frangione steps in the box for the Sharks, hits to third and thrown out at first. 1 out. Breenon Cross steps up and goes down swinging. 2nd out.  Chase Davis steps up to the plate, it’s a must to keep it going for the Sharks. Davis struck out for the 3rd out. Bolles take the Win 4 -1.