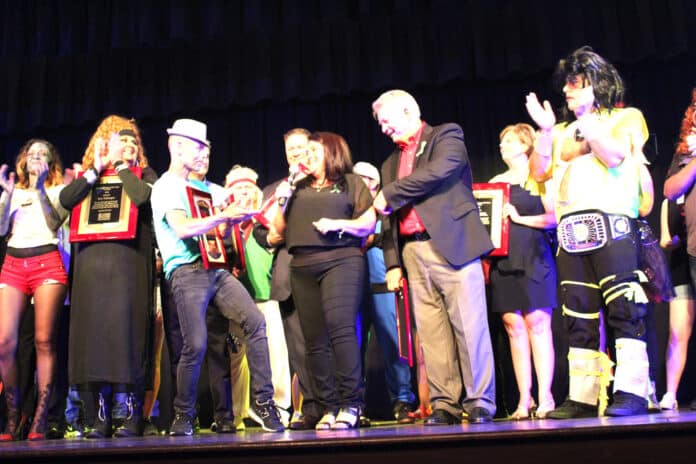 ‘Girls just wanna’ have fun.’ But sometimes the whole family wants to join in too! Girls, guys, and kids alike were all jamming out to the hits of the 80’s at the Heritage Pines Clubhouse on Saturday, June 9.

Over 200 guests purchased tickets and filled the tables in unity together for a night of fun and nostalgia while supporting a worthy cause.

NAMI of Hernando is the local branch of the nationwide organization, the National Alliance on Mental Illness. Formed in 1979, NAMI credited for spreading mental health awareness and building support groups throughout the United States. They pride themselves in educating the public on the true realities of mental illnesses and its effect on individuals, as well as their family and friends. NAMI fundraisers occur many times per year and range from various activities to help promote awareness and raise funds, due to NAMI being a nonprofit organization. The proceeds went to NAMI of Hernando, as well as Vincent Academy Adventure Coast. This particular fundraiser was a Lip Sync Battle, themed after the 80’s era of rock, rebellion, and big hair.

Guests began filing in at around 5 pm, that evening, and were free to drink from the open bar, snack on hors d’ oeuvres, sing karaoke, and mingle. Officially beginning at 6 pm, guests were seated at tables facing the main stage and were served a full course of dinner and then dessert. With stomachs full, the guests excitedly watched as the lip sync battle commenced.

John Leggio’s eleven performers who had travelled from New York especially for the event, danced for the audience between acts. They were an energetic, extremely talented troupe who seemed tireless. John Leggio, a Hernando County local is a director, choreographer, and teacher, and was the owner and artistic director of John Leggio’s Center for the Performing Arts, located in Spring Hill.

Leggio is a former Broadway dancer who performed in the musicals CATS, Joseph and the Amazing Technicolor Dreamcoat, Showboat, and My Fair Lady. He had made a special trip from New York to train and work with the dancers and lip sync contestants for this event.

The Lip Sync Battle and the extra dance routines in their entirety were choreographed by the talented Leggio. The happenings of the night were announced by celebrity Emcee, Justin Shea, who has battled mental illness throughout his life. He was a member of the Vincent House in Pinellas Park in 2004 where he was given help and a place for recovery.

The dedicated contestants performed lip syncs from classics such as ‘Love Shack’, ‘Rhythm Nation’, ‘Thriller’, and more. In between each act, the John Leggio dancers performed various hits from the 80’s, keeping the crowd lively and energized. The ending act for the night was Kevin Carroll from the Hernando County Fire Department. Carroll took lip syncing to a whole new level as he and his crew were dressed as Twisted Sister doppelgangers, from the giant, long hair to the ripped jeans and latex.

“We’re not gonna take it” blared through the hall as guests rocked out to the classic throwback. Instead of putting out a fire, the Fire Department was igniting one… literally. Throughout the song, flames burst up from both sides of the stage to add to the rock and roll concert effect, while the John Leggio dancers performed wildly in the background.

Obviously, the HCFD were ‘on fire’ as they took home first place, for the second year in a row.

Raffle tickets were also given out generously for several different prizes, as well as a silent auction, to keep the audience entertained as the judges were deliberating their final decisions.

An of noteworthy organizations/businesses and local government was represented through the diversity in judges. Their goal and common ground of advocacy and awareness for the greater good of our county and the surrounding areas was evident throughout their time at the Lip Sync Battle and the support and love shown towards NAMI of Hernando County.

At the end of the evening, NAMI Hernando Board President, Jay Rowden, presented awards to distinguished members of the community who had offered their aid generously towards the 2018 Lip Sync Battle.

“What a difference a year makes, and 2018 has been a year full of effective and efficient resources for those persons living with mental illness! All of this could not be done without the support of our board, our members, our government, and most importantly our community!” Rowden stated of the current year’s results, thus far.

To donate to a worthy cause or to volunteer your services for NAMI of Hernando County, visit their website at https://www.nami.org/Get-Involved or call them at 352-684-0004.