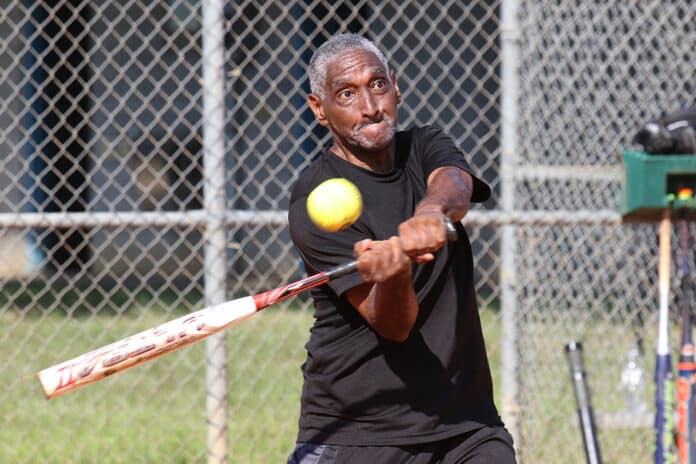 “To make men’s softball great again” is what Ron Valure (54) President for the Spring Hill Senior Softball Invitational League (SHSSIL) wants to do. Valure is going on his 5th season with SHSSIL and continues to grow the league presence throughout the season.

“When I first heard about this, I was reluctant at first, but when I came out here (Spring Hill Veterans Memorial Park) and saw these guys that were in their 70’s playing (softball), and that was my motivation,” Valure said.

During the summer two of the leagues get together to compete for an 8-week practice game season. The games replace basic team practices which in turns gives all the players a way of maintaining a level of energy for the upcoming season.

“I always say we are lions in winter…it’s our last roar,” Jeff Gerbino said. “It’s a chance to be competitive again and gives us chance to go out there (on the field). It’s the idea to challenge yourself like you did when you were younger.”

On the field, these youthful seniors showcased amazing action during the these practice games as well as showing they still got that athletic drive. Line drive catches, slides into second base and pop flies into the outfield that had just enough air time to second-guess the distance. But action packed innings isn’t what these gentlemen are all about, they have never let go of their athleticism through the years and most importantly together they have built long-lasting friendships.

“It makes the day. You look forward to after the game. We are competitive here, but when we are off the field, we are good friends… it’s like family here.” Mike Labriola (64) has been a part of the league since 2004.

Batting practice begins in July 2018, so those of you that are interested in swinging into action and bringing your A-game into full force, check out the links below for more information about the leagues and which league is right for you.

“Competitiveness at our age, it’s worth it. It gives us something to do,” said Larry Dodson (67). Dodson has been playing with Spring Hill Senior Softball Invitational League for 11 years.