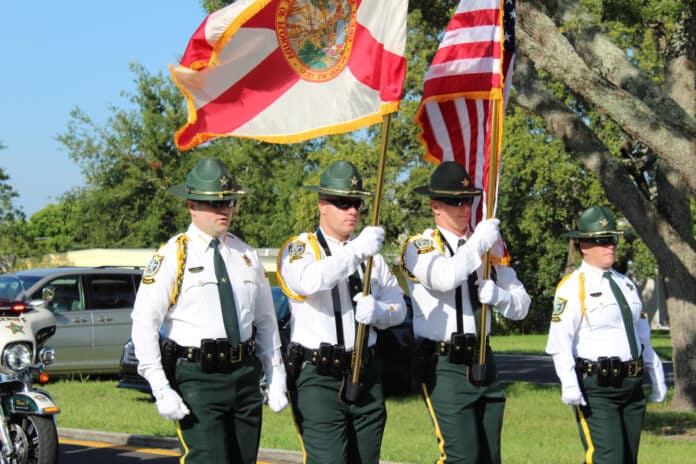 A parade is an important part of any Independence Day celebration and Hernando County is lucky to have a lovely one hosted by the High Point community in Brooksville and open to the public.

Participants included local candidates and dignitaries, our US Congressman for the 11th District, Dan Webster, our State Rep, Blaise Ingoglia, Sheriff Al Nienhuis and members of the Hernando County Sheriff’s Office in squad cars, on bike and on horseback.  There were a number of beautiful horse entries, individual and group golf cart entries, motorcycle entries and vintage car entries. Local community organizations that proudly displayed their patriotism in the parade include the Young Marines, the High Point safety patrol, Sons of Abraham Motorcycle Ministry, Nature Coast English Car Club, Civil Air Patrol, Hernando County Squadron 301, the High Point Quilters, High Point Lions Club and the NYPD Hernando 10-13 Club.  One entry that was particularly eye catching was a group of friends: Isabella, Sandy, Ginny, Barbara, Dave and Butch dressed as Flamingos. (We recently learned that flamingos are native to the state of Florida!) The costumes were created by High Point resident Gwen Roy and Guy Peters was their music man.

The parade’s Grand Marshal was WWII veteran Jack Sumerix, 97, whose goal was to live to the age of 100.  Now that seems too easy for him and he’s made it his goal to get to 110!  Jack has been a High Point resident for 38 years. He is actually a veteran of the Air Force, Army and Navy. He served in General George Patton’s 3rd Armored Division, seeing action in a number of countries including England, France, Germany, Austria and Czechoslovakia. After returning home from war, he married his sweetheart Marian and the couple raised 3 children. Jack and Marian had 60 wonderful years together until she passed away.

Jack was a Senior Buyer for Babcock Wilcox Construction, a world leader in energy and environmental technologies for power and industrial markets.  Prior to his retirement, he worked on a project for a power plant in Israel. Jack Sumerix is a well deserving Grand Marshal.