The astronaut and the soccer ball 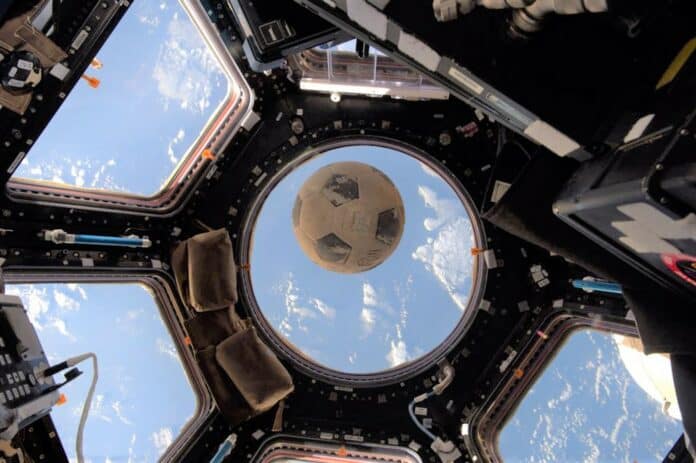 About a year ago our own Julie Maglio interviewed astronaut Shane Kimbrough on his return form the International Space Station. Shane Kimbrough has a lot of family in the area. James Walt Kimbrough came to Hernando County in the early 1900’s and was a cattle and citrus farmer in Spring Lake. The family grew and became prominent in Hernando County. Our sports pages often list the accomplishments of Shane’s cousins. Most recently, Karli Kimbrough was featured as the 2018 Salutatorian of Hernando High School.

We recently learned that Shane was involved in a wonderful story that brings together a soccer ball and the Challenger tragedy. With the World Cup ongoing this is a timely story.

One item that Challenger Astronaut Ellison Onizuka had in his locker on the Challenger was a soccer ball signed by his daughter Janelle Onizuka’s soccer team at Clear Lake High School in Houston. On that cold morning on January 28, 1986 when the Challenger broke apart 73 seconds into its mission, the ball survived. The soccer ball survived the breaking up of the shuttle and fell into the ocean where it was recovered since it was light enough to float on the water.

Many school children watched that flight since former school teacher Christa McAuliffe was onboard. In Hernando, some students stood outside watching the trail left by the shuttle. They became aware of an issue when they saw the trail split in two.

After the shuttle accident investigation was closed NASA contacted the families to return any personal items that had been found. NASA returned the soccer ball to the Onizukas. Janelle donated the ball to Clear Lake High School which was the original plan and it was placed in the trophy case.

Her husband worked with Col. Shane Kimbrough who was about to go on his second mission to the International Space Station. Shane’s son also attended school there. Col. Kimbrough had contacted her and asked if the students at Clear Lake High School would like to send anything up to the Space Station.

Karen mentioned the soccer ball that had come from the Challenger. On October. 19, 2016, Col. Kimbrough took the soccer ball with him into space where he stayed for 173 day on International Space Station. It was returning from this trip when Col. Kimbrough gave his interview to the Hernando Sun about a year ago.

The soccer ball was returned to Clear Lake High School where it now sits in its own display case. Col. Kimbrough and Karen Engle made sure that the soccer ball from the Challenger finally made it into space.

From Hernando County to Mars; an interview with astronaut Shane Kimbrough
By Julie B. Maglio
Originally printed May 19, 2017