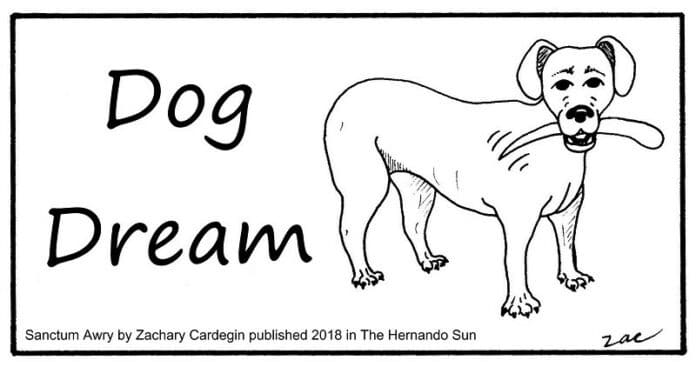 I have never seen my wife’s dogs fully asleep.  I’ve noticed them napping, but I’ve never watched them while they were in deep slumber.  I only know from episodes on TV and segments in movies that dogs dream about running and chasing.  I have watched cats, but I’ve never caught on to what they dream about. They twitch their whiskers and paws and then, after their kitty version of REM, they remain motionless in their sprawl with the tip of their tongue sticking out until some distant sound snaps them awake.

Yes, I have noticed her dogs eating, and frankly I wish I could do the same now and then, just stick my face in the food and gulp everything down (I’m always in a hurry) and quickly lick up any spillage.  That would give me an upset stomach, of course, for I don’t have the intestinal chemistry as dogs, or cats. But it would be fun and convenient.

The main thing I make sure I’m not present for is when my wife’s dogs poop.  (I accidentally saw one once, and by golly it looks just like a scene from South Park.)  Their fenced-in bathroom takes up a quarter of the backyard, and I don’t want to see it, I don’t want to know about it, and I refuse to mow there.  Unfortunately, I have witnessed them using my carpet as toilet paper. And here’s the thing that makes it even worse: They don’t always wipe their butts in the house, so exactly what are they trying to scrape off their anuses when they do?  Some kind of itchy, parasitic worms, I’m sure. Since it is not possible for me to steam clean the carpet twice a day, I simply never walk around the house bare-footed or even sock-footed. Worms love to wiggle through socks, you know. So I take my shoes off when I come inside and put on slippers, to make sure I don’t spread any animal excrement (including skyrat and treerat feces, and human spit) in my house from the outdoors.  But really, slippers will spread anything already on the carpet. There’s no escaping walking on doggie TP as long as dogs are kept inside.

For thousands of years dogs have been mankind’s companion—not best friend; that’s a media lie promoted by dog food companies.  When I was little, every movie, show, and cartoon had dogs living in doghouses. The advent of skyscrapers screwed up that behavior of health.  (I think “The Thin Man” started it.) And if people could keep animals in apartments, then suburban home owners could keep their dogs in their houses.  I saw the movie Poltergeist at the theatre when it came out, and the scenes that mostly made my skin crawl were of the dog roaming the house when the humans were asleep.  Yeah, sure, dogs and other pets have saved humans from fires and other emergencies, and that’s good. But it’s rare. How about if the news reports all the instances of death by pets?

Note to self: contact the Lysol people about making slippers with soles infused with disinfectant.