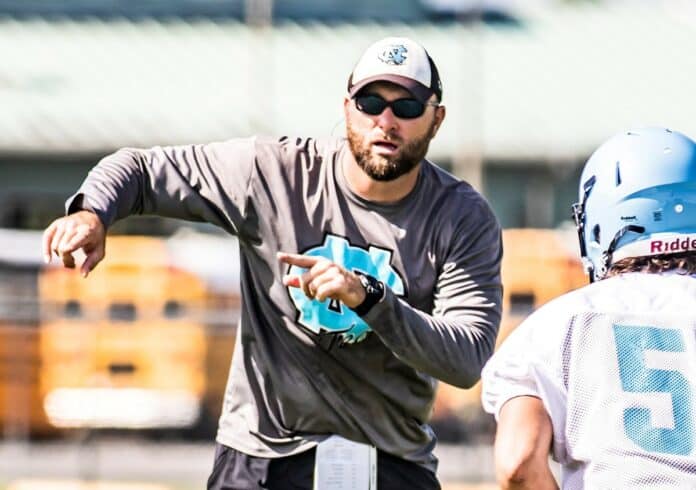 Everyone that knows prep football in Hernando County can tell you that despite Nature Coast Technical High School being a program that’s under 15 years old, the Sharks have a lot of stories history already. Now under the direction of second-year coach Cory Johns, the Sharks are looking to get back into the Class 5A postseason and beyond. We asked Johns five burning questions heading into this training camp.

AV: You guys reached the postseason last fall but finished as the runner-up to Hernando. Has a rivalry begun there?

CJ: There is no rivalry except we are close in proximity. They still haven’t beaten us. It’s exciting for the community though if both teams are decent.

AV: How good will the backfield tandem of Fabian Burnett/Michael Weston be?

CJ: Fabian (Burnett) and Mike (Weston) will be the best backfield I’ve coached, which in my opinion is huge. They are not only great players but great students with both over a 3.5 grade point average.

AV: Despite the defense losing some key players, how good will that unit be?

CJ: Our defense lost a few key guys, but both leading tacklers are back as well as our emotional leader in Dajour Morgan. Our defensive line will have to step up and I have no doubt they will.

AV: How was the summer for your program?

CJ: The summer program was phenomenal. We had about 70 guys show up consistently. They worked harder than any team I’ve been around. They came together as a team with several team bonding opportunities. They got busted up this summer and will get the benefits of that sacrifice.

AV: Do you feel this fall’s team could be better than last year’s group?

CJ: I know this year’s team will be better as a team because they are more of a team. Not because the seniors were bad teammates, but because this group has been together with this coaching staff longer, and we have picked up some young very talented players from our junior varsity team.