Every day a happy day 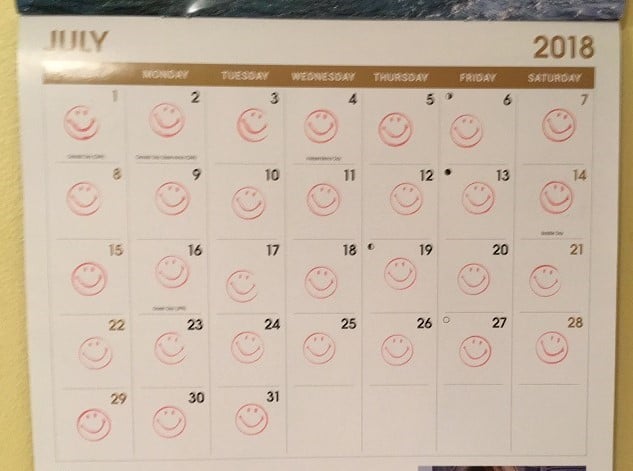 For years I marked the end of each day with an X on my calendar. Then for years I didn’t mark it at all, and I sometimes got confused about what day it was.  Later I used a diagonal line, from bottom left corner to top right, and sometimes top left corner to bottom right, and then I switched back to Xs during my three years in Germany.  Oh, I had a lot fun there, but it wasn’t home.  Plus, they are very similar to us—not exotic at all—and they are a lot cleaner, which really annoyed me.

I also had a calendar in my office, a three-year calendar of months that I made, thirty-six squares on typing paper that I drew with ruler and two sizes of markers, and I stuck it to the wall with thumbtacks.  On the 15th of the month I drew a diagonal line, and on the COB of the last day of the month I made it an X, both with some ceremony.  I still have that; it’s in my scrapbook because a lot people asked if they could draw a line, and after doing do so they added their initials.  They, too, were annoyed.

Back in the States, I alternated between Xs and diagonal slashes, but I began to wonder why I was so intent on crossing off the days.  What was I counting down to?  While being stuck overseas is one thing, but for the rest of my life?  I decided I no longer wanted to X the days.  For a long time I ignored the calendar, and of course I was occasionally confused.

Then I started working at Exwork.  I decided that despite my smart phone, which with a touch of a button I could see the date, I still wanted a physical means of tracking time.  So I started Xing the days again.  Then two years ago, which seems like two months to me, I found I didn’t like X.  Perhaps I never did.  There’s something too final about it, like the eyes of dead cartoon characters, and now that I think about it, it’s how many teachers marked wrong answers on my grade school papers.

So I went to my local office store and bought a green bingo dauber.  For three weeks I used it, but it was messy and looked too stark with rows of big green dots.  I went back and asked for a happy face stamp.  They only had one, an odd red version for preschool, a none-copyright version I guess.  But I bought it, and I use it, and I like it.  All last year, and so far this year, I make every day a happy face on my calendar.

Wife, kids, and grandkids: we should end each day with a smile.