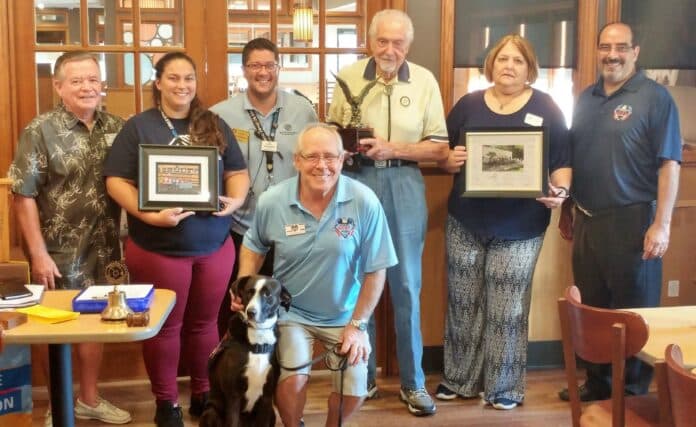 Three local non-profit organizations recently honored Mel Greene, a long-time Rotarian, for his generous contributions to their missions. The ceremony was held on Thursday, August 16 at the weekly meeting of the Rotary Club of Spring Hill.

Greene, who has been a Rotarian for forty-seven years, has supported many worthy causes in his lifetime. However, three organizations, in particular, wanted to thank him in a very special way.

One was the Veterans’ HEAT Factory, an organization that works with military men and women dealing with PTSD and helps them become more productive members of society. The acronym HEAT stands for Honor, Empower, Assist and Train. Gus Guadagnino, who founded the organization last October, saw that there was a need for this type of service. He set aside part of the building that houses his business, Joni Industries, for this purpose and put a lot of his own money into the project.

“We were at a point a few months ago where we were running out of money and then I get a check in the mail from Mel,” Guadagnino stated.

Greene’s reason for contributing to the Veterans HEAT Factory was very simple.

“I’m a World War II veteran. I went to the site and saw what they were doing to help the veterans and I was impressed,” Greene explained.

As a token of their appreciation, Guadagnino presented Greene with a brass eagle statuette containing a bible verse inscribed on the base.

The Boys and Girls Club of Hernando County, Inc. was another recipient of Greene’s generosity. In July one of the buses the organization uses for transporting children to and from schools and for field trips was damaged. Greene donated money to help get it fixed.

Brian McNamee, unit director for the Winding Waters K-8 branch stated, “If it wasn’t for all the donations we’ve received we wouldn’t be able to have the three buses needed for our program.”

McNamee and Jennifer DeFrancesco, the Unit Director for Westside Elementary School, presented a photo of the bus with the children standing in front of it to Greene as a thank you for his donation.

The Arc Nature Coast also received a substantial donation from Greene. The funds went  toward its capital campaign to replace the facility on the Neff Lake campus in Brooksville. Through the Rotary Club, Greene has been a long-time supporter of this worthwhile organization.

“I met Mark Barry [Executive Director of The Arc Nature Coast] when he came to speak at one of our meetings,” said Greene. “I bought brick pavers as a memorial to my late wife, Judy, and my late daughter, Debbie Koenig.”

Connie Calub, The Arc Nature Coast Program Director, presented Mel with a photo of The Arc clients that they had signed standing in front of the new center.

The mission of the Rotary Club is service to the community. Mel Greene is a stellar example of this ideal.