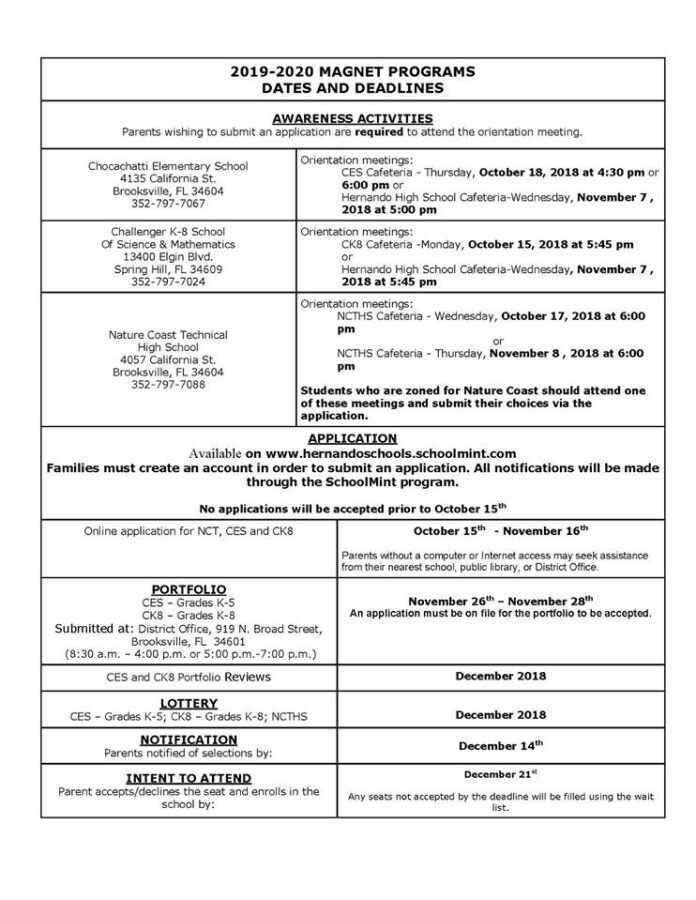 At the School Board workshop held August 14, 2018, Supervisor of School Choice Angela Kennedy presented new Magnet School Procedures Plan for the 2019-2020 school year.  According to Kennedy, there are changes to some of the language in the application packet, and dates have been adjusted for the coming school year. The board also discussed school capacity in the future, as future development in Spring Hill is expected to increase the number of students attending schools in the area.

Magnet schools are differentiated by having special educational focus, such as science, technology, engineering and mathematics (STEM), technical and trades or fine and performing arts.  Such schools are open to students regardless of the school district or zone in which they live, provided they meet the application requirements. In some cases, applications to magnet schools are so numerous, that a lottery system is employed for acceptance.

The dates for the 2019-2020 school year have been published, and sent to every school, daycare provider and VPK.  Hernando County School Choice also has a Facebook page, on which the dates will be published. Notifications are also posted on the Hernando County School’s Facebook page, and robo-calls are made to the numbers given for the applicants. Regarding responses to submitted applications, she reported that a specialized computer program is used during the application process that shows from where applications are sent, and where her department may need to follow up with extra calls and notices.

Discussion turned to the number of students able to be accommodated both in zoned and magnet schools.  Kennedy reported that the number of zoned seats set by each school dictates how many magnet seats are available.

Interim Superintendent John Stratton acknowledged the growth of Hernando County, particularly in the Avalon and Trillium communities, and the planned development of Spring Center, which is expected to add over 3000 families to the area just south of Explorer K-8.  Planning for the next school year, Stratton said, “We would increase the zone enrollment, decrease the magnet enrollment, and you can even adjust for growth … because you can always open up magnet seats later.”

Gus Guadagnino asked specifically what the plan is for increased student population that Spring Center will bring. Stratton said, “we’re very concerned with what impact that will have on (Explorer K-8) as well as surrounding schools.”   Stratton referenced a parcel in the Spring Center plan that is specifically planned for expansion of Explorer K-8. “We are well aware,” but he admitted, “Do not have answers yet.” He went on to say that the new development is expected to have quite an impact, and that rezoning is a possibility.

Chairman Mark Johnson said, “This board is going to need to be involved (in the Spring Center planning) very early.”  Johnson continued, “I think the county is trying to change the master plan and squeak us out of those decisions.”

Narverud reported from her conversation with county commissioners, that Spring Center is planned as a “retirement-type community,” and not expected to draw a large amount of families with school-age children.  Johnson countered by saying, “The original concept called for a school, called for playgrounds.” Susan Duval reminded Narverud and the board that Spring Hill itself was intended to be a retirement community, with no impact on schools at the time.

Stratton said it’s still early in the process, but on the board’s radar.  He went on to say that there are other developments in the area that will have an impact on schools.

What is a Magnet School:  https://magnet.edu/about/what-are-magnet-schools