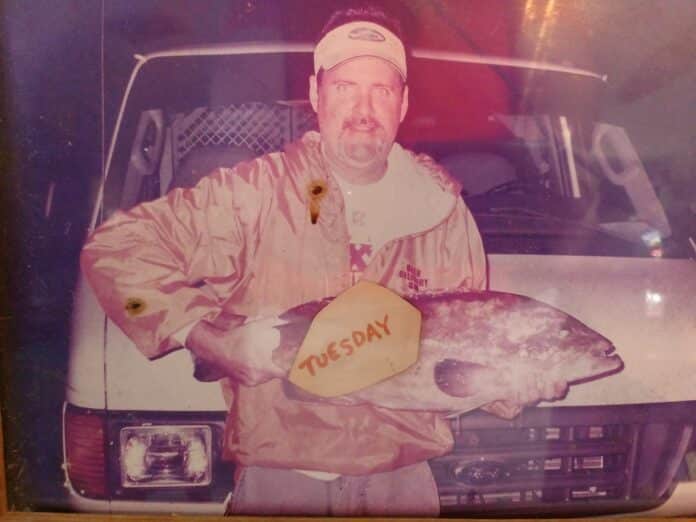 Family, friends and regulars of Becky Jack’s Seafood Shack gathered on Sunday, Sept. 9, 2018 to celebrate the life of owner Joe Foster, who passed away earlier in the week. Joe ran the restaurant with his wife Kim Curtis, who died in 2015.

Inside the restaurant, Doug Swan told the story of a photo of Joe smiling and holding a large grouper.  A longtime friend, Swan reminisced of fishing and boating with Joe and Kim, whom he’d met at Newk’s Cafe in Tampa over a decade ago.  Joe and Kim became regulars of Newk’s, and formed many friendships there.

They bought Becky’s restaurant, which had been a breakfast and lunch place, and added “Jack’s” as a nod to their friend, Jack who owned Newk’s.

In the large outdoor area, friends and family mingled, taking in the many years of photos featuring Joe and Kim with an of others.  While Under the Bridge by Red Hot Chili Peppers’ played, a friend named Dale told us about the Becky Jack’s tradition of assigning nicknames to distinguish friends.   Dale’s nickname is “Carl,” after an incorrect guess at his name, early in their relationship.  For balance, another friend, named Carl is nicknamed “Dale.”

Tina Ryman, who owns Marker 48 with her husband Maurice, were also friends. Known as “Sweet Tea” and “Ginger Ale,” respectively.

“Every friend that I have in my life was introduced by them (Joe and Kim) … two clowns,”  Dale added, pushing sadness aside.

Joe’s sisters, Denise and Julie gave a brief history of Joe’s life, as only they could, from his difficult birth, highlighting his funny and mischievous personality, his love of his family and friends and his kindness and generosity.  With respect to those qualities, Denise said, “Be like Joe.”