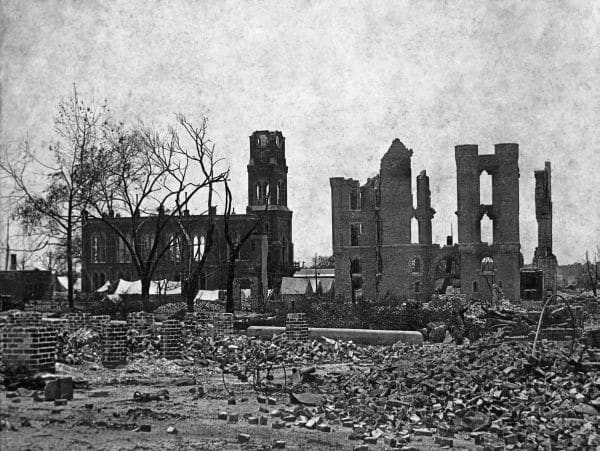 The burning of the Hernando County Courthouse in 1877 is indicative of the lawless period that followed the Civil War. Many of the men returning from the war had seen unspeakable things. The people who had stayed behind had been raided by both sides either seeking supplies or destroying them.

Many of the officials during this time were either people that previously had little power or came from the north. Some of these officials used their office to seize property and distribute it for their gain.

Reconstruction lasted from 1868 until the 1877 presidential election. The election was very close and the Compromise of 1877 was a deal that allowed the Republican Rutherford Hayes to be president and ended Reconstruction in the three remaining states: Florida, Louisiana and South Carolina.

Many of the courthouses in Florida burned in the decade following the Civil War. This had real world consequences and there were a number of property disputes. Sale records were lost. For instance Virginia Jackson recorded “The May home was sold several times after Frank Saxon left. The records of those transactions, however, were lost in the courthouse fire. The first records after the fire are dated 1883, when J. H. Reddic sold the May-Saxon house to Jennie Johnson for $600.” The May home is now known as the May-Stringer House and is the home of the Hernando Heritage Museum.

The effect of the courthouses burning is that many of the transactions conducted during reconstruction were lost. Many of the judges and elected officials deciding the cases after reconstruction were the former confederates that were barred holding office during reconstruction. If there are no deeds it is up to the judges and officials to decide who owns the land. Officials would use the lack of ownership deeds to seize lands or right what they felt were past injustices.

In Baker County, the Courthouse was located in the small village of Sanderson. The courthouse was burned in in 1877. Baker county is near Jacksonville and borders Georgia.

The Clay County Courthouse was actually held in the McRae House which burned in 1872. Clay County is west of the St Johns river and south of Jacksonville.

The Columbia County Courthouse was burned by arsonists four times in 1848, 1860, 1867, and 1874. Columbia County is located on the Georgia line between Jacksonville and Tallahassee.

The Duval County Courthouse was burned twice. Once during the Civil War and again in 1901. Duval County is largely made up of Jacksonville.

The Hernando County Courthouse burned in 1877. The building storing the records was damaged by arson in 1879.

The Holmes County Courthouse at Cerro Gordo was burned around 1870. After the courthouse burned, court was said to have been held in the woods. Holmes County is north of Panama City on the Georgia line.

The Orange County Courthouse was two-stories and built with hewn-logs, which burned in 1868. Orange County is largely made up of Orlando.

There were at least ten Florida courthouse fires around the time of the Hernando Courthouse fire. Most of these fires were directly attributable to arson. The courthouse fire and general lawlessness of that era is often used as an indictment of the county during that time, but these courthouse fires show that the difficulties of that time extend throughout north and central Florida.