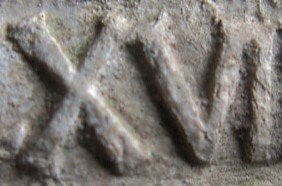 It’s VII:XXIII at night, and I’m going to finish this by X, because I have to go to bed by XI and get up at VI:XV in order to get ready to take my grandkids to school by VIII:LV so they can be in class by IX.

Catch any of that?  I remember having to suffer through Roman Numerals in elementary school, a whole chapter in my math textbook, but not in high school.  And little by little over the years (it was actually probably pretty quick) I forgot all but the basics; long numbers are now a mystery to me.

Oh, I still see such letters being used, especially for the Super Bowls.  The last one I looked forward to and watched all the way through was XXII.  This upcoming one is LIII. Wow, that’s XXXI years ago! I was in Germany at the time, and so we didn’t get to see it until VIII or more hours after it was over—a recording provided by AFN.  It was a big deal that anyone in the know about the final score from other sources should keep it to themselves, and rumor was that you could be court-martialed for divulging that information.  The Redskins won over the Broncos XLII to X, because Elway was lethargic, and I was so disgusted that I decided from now on I was going to watch Sumo Wrestling. And I have, now and then.

The reason this comes to mind is that earlier this month I was watching a channel that shows old cartoons, and a lot of Tom and Jerry.  Throughout the years the quality of those drawings fluctuated from messy to sloppy, with careful, thoughtful artwork in-between. I was sure the good ones were from the mid-50s, but when I looked up one of those dates on my phone, MCMLXIV, it turned out to be 1964.  I was surprised—and annoyed: Why are such ancient numerals still being used at all?

I think when the government decided that Latin (and Greek) were no longer to be taught in American schools, the old masters exacted their revenge by leaving Roman Numerals on the curriculum.  Apparently there was no mention against that in the new rules. (This is not the same as cursive writing; that’s quick alphabet, not at all like ancient numbers that cannot be easily multiplied or added in a column.)

And how were they pronounced back then?  That’s what annoyed me, having to translate those capitals into English words and numbers (which was kind of like the nightmare later of trying to master the writing and reading of chemical formulas in the XIth grade) and never knowing the spoken version.  I’m sure when an ancient Roman merchant completed a transaction, he didn’t tell his customer, “That’s eye-point-vee sestertii from eye dupondius, and eye denarius is your change.”

P.S. Our number 16 is written as XVI and pronounced “sedecim,” which I believe is annunciated as SEE-duh-kim.  Good to know, but too late. You keepers of entertainment, please replace that archaic nonsense with the modern, more sophisticated numbers.

Editor’s Note: The Hernando Sun apologizes to Mr. Cardegin for our archaic use of Roman Numerals on the front page- although we’ll never have MCMLXIV issues in a year so I guess we’ll keep them.