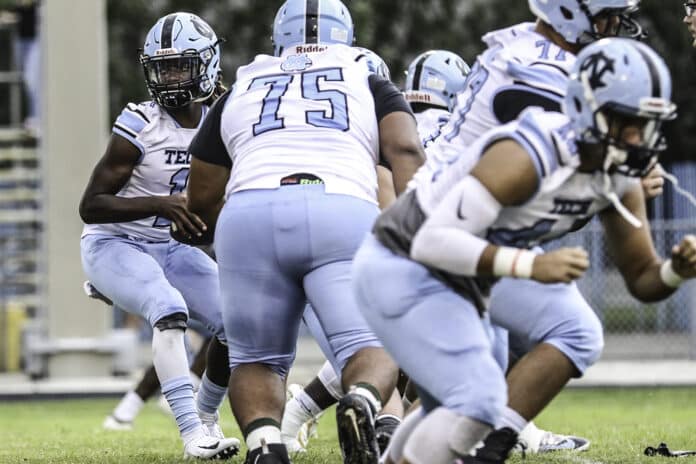 Week 5 of the regular season for prep football in the state of Florida began last week and we here at the Hernando Sun want to give you the Hernando County reader all the insight you can get during the 2018 campaign. We will be doing a weekly ranking of the five teams within Hernando County.

No. 1 Nature Coast (3-1, 2-0): The Sharks vault themselves to the top spot in this poll after pulling off a tough 20-14 victory over district rival Crystal River. The pesky Pirates gave the Sharks fits throughout the contest, but a solid defensive effort gave Nature Coast the barrow victory. Nature Coast has the state’s leading rusher in Michael Weston.

No. 2 Hernando (4-1, 1-1): Remember that upset along the way during the regular season that Hernando would probably never suffer? Yeah, well it ended up happening this past Friday against Inverness Citrus. The Leopards fell in a surprising 18-6 loss to the Hurricanes and now find themselves playing catch up in the Class 5A, District 7 race.

No. 3 Springstead (3-2, 0-1): Mike Garofano and crew made sure to put everyone on notice that the Eagles are far from done this 2018 season in a dominating 32-7 victory over Lakewood Ranch last Friday. During what is labeled the toughest stretch of games for Springstead, the Eagles are 1-1 during the gauntlet of contests.

No. 4 Weeki Wachee (2-2, 1-0): Another game and another 6-touchdown performance for Hornets’ quarterback Vaughn Sykora. The signal caller has thrown for 12 touchdowns the last two games and heads into a test when Weeki Wachee faces Inverness Citrus this week. At this pace, Sykora could be on pace to throw for over 30 touchdowns.

No. 5 Central (0-5, 0-2): The Bears just can’t find a way to stop opposing offenses and against the Hornets last week, it was another example of Central’s tough season so far. It was the fourth game in which the Bears allowed over 50 points. John Warren has the toughest task in keeping his club together for the next five games.