HomeUncategorized Man Charged with Strong Arm Robbery and Battery on a Person 65...
Uncategorized 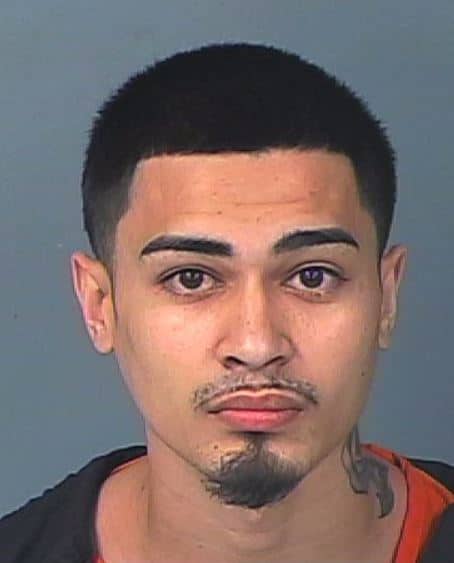 On 11-01-18 just before 5:30 p.m., Hernando County Sheriff’s deputies were dispatched to the area of 6917 Treehaven Drive in Spring Hill after dispatchers received calls regarding a large group of people beating an elderly gentleman.  The elderly gentleman was reportedly bleeding from his face.

Upon arrival, deputies contacted the person who called 9-1-1.  The caller advised that she observed a large crowd of people standing around an elderly Asian man in the roadway.  She then observed two males striking and pushing the victim while the two females pushed the gentleman’s bicycle.

The caller stated that she was in fear for the elderly gentleman’s life, so she pulled to the side of the road and contacted 9-1-1.  After being notified that “law enforcement was on the way,” all suspects fled the area.

Deputies conducted a thorough check of the area and were able to locate the individuals who battered the elderly gentleman.

Deputies interviewed two females who were located near the scene of the incident.  Both females advised deputies that the elderly male approached them and asked them to “Call the cops.”

Deputies then made contact with Joshua Rhoades who resides at 6917 Treehaven Drive.  Rhoades advised that while they were leaving his residence, they observed “a random guy digging through the neighbor’s trash.”  Rhoades went on to say that he and his buddy, Lee Petit, contacted the elderly male and asked what he was doing.    According to Rhoades, the elderly male then “came at them” and began yelling at them in an unknown language, eventually throwing trash in Rhoades’ yard.

Rhoades told deputies that while removing the bicycle from the property, the elderly male “flattened my mailbox” and “whipped out a stick,” all the while attaching Rhoades’ friend, Lee Petit.  Rhoades said that Petit defended himself, but would not elaborate.

Deputies then spoke with Lee Petit.  Petit advised that he and Rhoades watched the elderly male digging through his trash cans, which were located next to the house, near the front door.  Petit advised that after the male refused to leave the property that he forcefully removed him by walking the bicycle down the driveway towards the road.  Petit said the male then produced a “metal stick” and began striking Petit with it.  Petit reportedly found another stick and defended himself.

Petit told deputies the man bashed the mailbox down with the metal stick.  When deputies confronted Petit about the tire tracks across the actual mailbox and on the ground around the base of the mailbox, Petit recanted his story.  Rhoades also recanted his version of the story regarding how the mailbox got knocked down.

Petit said the incident occurred in his yard and also in the street in front of his residence.  When asked why witnesses reported the incident as having occurred down the street, Petit stated, “They don’t know what they saw.”

Deputies then attempted to speak with the elderly Asian male (71 YOA).  He spoke very little English and was difficult to understand.  Deputies noted that he had a large laceration across his right eyelid, and blood running down his face.  Several abrasions were noted on his face, hands, and the inside of his right leg.  The victim was transported to a local hospital by Hernando County Fire Rescue for treatment of his injuries.

After several failed attempts at utilizing a language interpreter to communicate with the elderly gentleman, deputies were able to locate a family member.  The family member responded to the hospital and translated ancient Mandarin to English.

The victim stated that he was on his bicycle in the area of Pinehurst Drive when he was attacked by strangers, for no apparent reason.  He stated he was looking at a piece of carpet that was on the side of the road when he was approached by two strangers in a vehicle.  When the strangers began yelling at him, he tried to walk away.  The strangers got out of their car and ran toward him in an aggressive manner.

The victim stated that he tried to leave the area (get on his bicycle) several times but the strangers would not allow it.  During the incident, the victim was punched several times and had several items thrown at him.  One of the two strangers took his bicycle and threw it down the road.  The victim stated that he was calling for help the entire time, but it appeared that no one heard him.

After speaking with witnesses and reviewing video surveillance, deputies responded back to the residence to make contact with Lee Michael Petit, 21.  Petit was immediately placed under arrest and charged as follows: