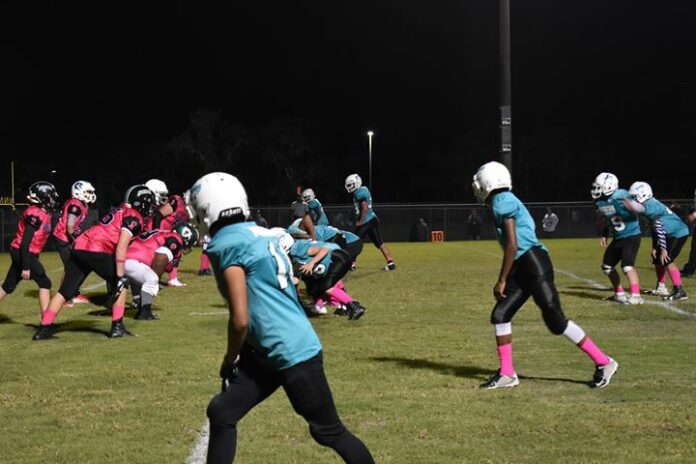 Spring Hill Athletic Association is a non-profit organization, supported with volunteers. Everyone is held to a code of conduct to assist in developing social skills and positive behavior. Coaching staff, teams and league supports in the success of the athlete’s academics. The season opens every August with a Football and Cheer Jamboree. To sign up go to http://www.shaaeaglesfootballandcheer.com SHAA consists of 3 age divisions. Division 1 ages 5-8, division 2 ages 9-10 and division 3 ages 11-13.

In Division 3, Coach Jimmy Allen has been with SHAA for four years this year and he will be loosing about seventy five percent of his team. The players will be too old to play in league and they will move on to high school football teams. Coach Jimmy Allen was happy to take the championship on Saturday so these boys could take the experience with them as they begin the next level of competition.

The Predators took on the Punishers this past Saturday in the battle for the Championship in Division 3 at Veterans Park.  Predators Head Coach Jimmy Allen said they were 13-12 going into halftime.  “We got together with our Predators Asst. Head Coach Defensive coordinator (Minister at New Hope Missionary Baptist Church) Gary Fields and we made some adjustments and put in some plays that no-one has seen yet this season.  These adjustments and plays put us at 42-24 taking the Championship,” said Allen.   He also remarked that it was a complete team effort that took them to an undefeated season 11-0. For 2019, Division 3 will start fresh again with new players and some returning players.