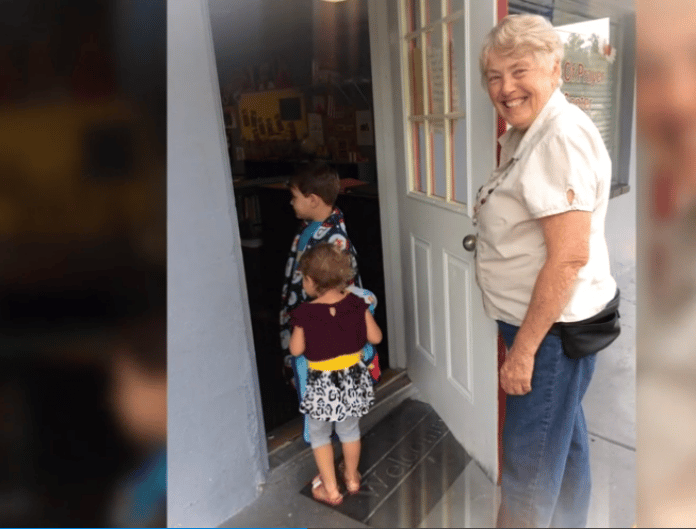 The word “hero” is usually associated with brave deeds done in combat or by first responders. Hernando County resident, Barbara Lemoine, is a hero of a different sort. On November 27, the Tampa Bay Lightning honored Barbara with its 14th Lightning Community Hero Award for her work in founding and running The Life Center (TLC) of Hernando.  Along with a plaque, team owner Jeff Vinik and Left Winger (forward position) Alex Killorn presented Barbara with a check for $50,000. According to a Lightning press release Barbara will donate the money to The Life Center, Pay It Forward Farm, Joseph House Brooksville and the Seventh Mom Project.

It was in 2002 that Barbara began outlining her vision to offer homeless mothers a home in which to develop the skills to become good parents and responsible citizens. She applied for non-profit status and searched for the opportunity to begin building her dream. In 2012, Barbara was offered a dilapidated 833 sq. ft. house. She enlisted donors and construction volunteers, wielded a hammer and paintbrush, and put together a board of citizens to aid her.

The first young mother interviewed for the program said, “I don’t know where I would have gone if TLC was not here.”

This young woman later admitted that, without TLC, she would have returned to her abusive husband. She had two toddlers and was expecting her third child. She had no other place to live. TLC opened its doors just in time to offer help and hope.

Although TLC has not been able to shelter all the homeless moms and babies who desperately need help, it makes a huge difference in the lives of those families who live there. Ten babies have been born while their mothers lived at TLC. Moms and babies both receive love as the moms learn how to care for their babies. The Department of Children and Families was able to reunite four children to their mothers because TLC provided appropriate living conditions for those families. Mothers learn Life Skills and become self sufficient. Children thrive in a stable living environment.

To date, TLC has taken in fifty moms and  seventy babies/preschoolers who had no place to go. Notable among the success stories are those women who, after participating in TLC’s program, went on to enter the military, enroll in college, reunite with family, gain stable employment and become established in the community.

The organization is a catalyst to break the cycle of poverty and entitlement.

In the first half of 2018, the facility provided shelter for twelve families for a total of 3,237 nights. These families included twenty children and three pregnant women.

TLC has achieved all this without any government funds. It runs on volunteers and donations and there is no paid staff. TLC is definitely a grassroots organization and only exists because the people in our community care. Volunteers provide every service. Barbara outlined some of the ways in which people in the community can help.

“We need plumbers and electricians, child care “Story Ladies” and drivers for our van.

Of course, monetary donations are always appreciated. The need is great. Last month over a dozen young mothers were turned away due to a lack of space.

“Currently single dads and moms over the age of 25 are routinely turned away. Families with children over the age of five are also excluded, leaving many school-aged children homeless. TLC makes a difference in the lives of those it is able to bring into the program. Turning so many others away is heartbreaking,” Barbara remarks.

One resident recently said, “I have three young children and we would be homeless, sleeping in a car, scared, not knowing what to do. TLC shows compassion and love and gives a home to people they don’t even know. There truly is no other place like here. I cried when they said they had a room for me. I called so many homeless shelters trying to get me and my kids a roof over our heads, but they didn’t have room or didn’t even call back. TLC  didn’t hesitate to let me in and give me a home. The world needs more places like this and people that care like they do.”  Barbara most desires to establish a permanent location large enough to accommodate more of the desperate moms who come to TLC seeking shelter. Such a building would add permanence to the program. There are residential and commercial buildings nearby that she considers possibilities for future expansion. The Tampa Bay Lightning’s generous donation will go a long way to helping The Life Center of Hernando fulfill it’s goals and to grow so that more families can be helped.

The acronym TLC commonly stands for “Tender Loving Care.” Barbara Lemoine, her volunteers, community supporters and generous benefactors, such as the Tampa Bay Lightning ,exemplify this phrase in The Life Center of Hernando.