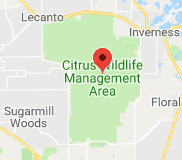 Just Southwest of Inverness is located one of my favorite forests, the Citrus Wildlife Management Area, a part of the Withlacoochee State Forest.  Having practically grown up while hunting those woods, I’ve watched the property go through many cycles of change. Most of those changes have been great improvements, such as the prescribed burning programs, additions of acreage to the area as well the management practices implemented to conserve the deer herd.

Sadly, there is one thing has been troubling the property, and that is abuse.  Unlike many of the state WMA’s, Citrus is not fenced off, or does it have designated points of entry.  Being so free to access, lowlife folks take advantage of that in order to dump their garbage and refuse about the perimeters of the WMA.  I’ve been contacted by many of my readers, friends, such as Mick Gist of Inverness, who is sickened by the illegal dumping.

Well, enough folks have voiced their concerns to the Florida Wildlife Commission and our state Forestry Department, that the folks in Tallahassee have made it a priority to put an end to such practices.  In a chance meeting with FWCs Lt. Matt Griffis, out on the Citrus WMA, I thanked him for the efforts he and his team of five officers are putting forth to put an end to that particular criminal activity.

Now folks, another way our WMA gets abused, is due to the off-roaders intentionally tearing up the trails.  I can tell you how bad it had gotten when I have gotten my own truck stuck in the ridiculous ruts they have created.  Thirty-plus years of driving this forest and I’ve only been stuck twice and both times earlier this year. Forestry is due an awful lot of credit for their attempts at repairing the trails, their hard work and efforts have been amazing.  Now, with Lt. Griffis and his men on regular patrol of the Citrus WMA, perhaps the illegal dumping and wanton destruction of the trailways can be gotten under control.

One thing I have been acutely aware of the over-abundance of coyotes in not only the Citrus WMA, but all of the WMA’s in the west and central portion of or state.  Everywhere I go, I encounter their tracks and more than once I’ve come across the remnants of a recent kill. It seems the songdogs have really taken over and it’s up to us hunters, the true and original practitioners of conservation, to do something about it.

However, during the small-game season, we will be allowed to hunt them, using rimfire rifles and game calls.  I see that electronic callers as well as handheld calls are welcome during the season and I will be organizing a predator hunting competition to help thin out the invasive scourge and help increase the odds of fawn survivability beyond this Spring.  I’ll write more about this competition, our Second Annual Coyote Cleanout, hosted by Rebel Yell Outdoors, as I hammer out the details and I welcome any input on the topic via e-mail.

As always, I’m grateful for the opportunity to visit with you here and I am always available for feedback and suggestions at [email protected].  God Bless and Good Hunting!