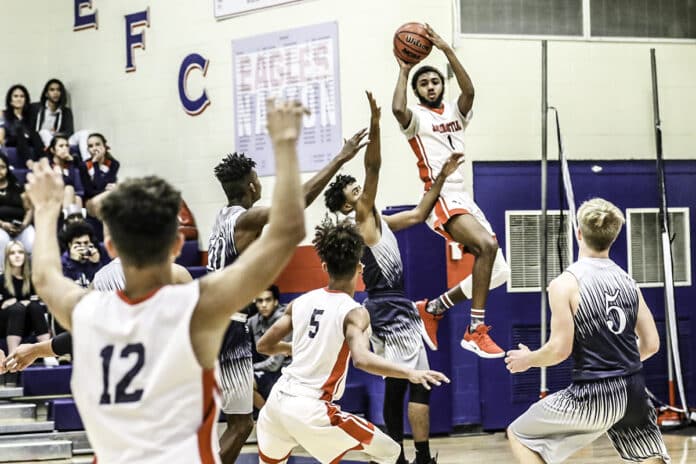 No. 1 Nature Coast (5-0, 3-0): Blowouts much? That’s all the Sharks have really been accustomed to lately when it comes to regular season games. Nature Coast has won its past four games by no less than 26 points or more. The Sharks head into the winter break with games coming against Springstead, Central, Academy at the Lakes and Tampa Jefferson.

No. 2 Springstead (3-3 1-1): The Eagles began the season with losses to Hudson Fivay and Ocala Trinity Catholic but ended up bouncing back and winning three out of the next four games. Now the Eagles head into the winter break with games against Weeki Wachee and Nature Coast Technical.

No. 3 Central (2-3, 0-1): After what was such a promising start to the season, which included a 50-24 blowout win over Dade City Pasco and a victory over First Academy, the Bears have followed that up with a couple losses. Central has four games before the winter break starts. Those opponents include road matchups against Bishop McLaughlin and Nature Coast.

No. 4 Hernando (1-5, 1-1): The Leopards have to feel after the first six games of the season that they might be snake bitten by close games. Hernando lost by a combined five points in its first three matchups of the season. With Hernando’s only win coming against Central, they hope to pickup the pace before the new year.

No. 5 Weeki Wachee (0-4, 0-0): A tough regular season to start off the season hasn’t helped out the Hornets whatsoever. Weeki Wachee has faced clubs like Levanto, Brooks-DeBartolo and Crystal River. Winless through four games, it could be a long season for the Hornets.