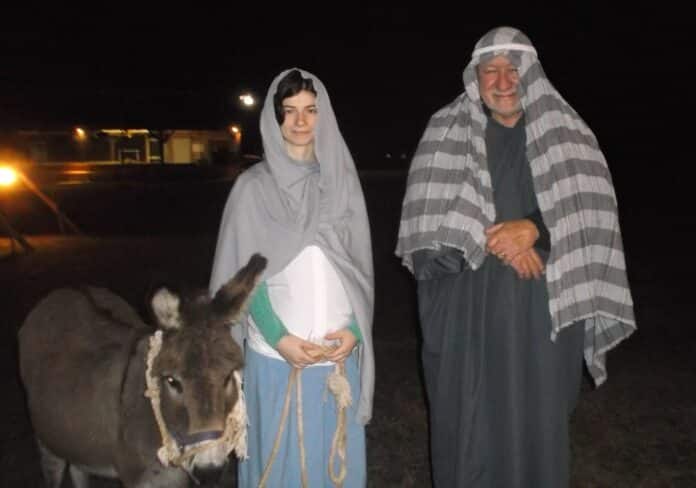 Last weekend rural Brooksville was transformed into the the towns of Nazareth and Bethlehem when Hillside Community Baptist Church presented The Road to Bethlehem, a live Nativity. Members of the congregation played the parts of Joseph, Mary, the innkeeper, shepherds and angels. A live burro and goats completed the tableau.

Visitors played their part, as well, by filling out their “census” forms with their name and address in order to pay their ‘taxes,’ like people in the first century A.D. had to do as told in the Gospel of Luke.

After everyone left the church auditorium, Shannon Jordan acted as guide and led people to the first scene – the Angel Gabriel’s announcement to Mary that she would bear a child. Then the group proceeded to the home of Joseph where he spoke of his dilemma in finding out that Mary was pregnant. After he falls asleep, an angel appears in his dream and tells him that Mary is carrying the Son of God.

Next, the guide led us to the inn in Bethlehem where we see Mary and Joseph being turned away by the innkeeper and told that they can spend the night in the adjacent stable. The angel announcing the birth of Jesus to the shepherds was the next scene. The stable with Mary and Joseph with the Baby Jesus was the final stop on the Road to Bethlehem.

After the guided tour, members of the church served coffee, hot chocolate and cookies to the visitors.

According to Reverend Joe Santerelli, pastor of Hillside Community Baptist Church, this is their fifteenth year putting on the Living Nativity.

Although not as many people showed up as in past years, visitor of all ages enjoyed the performances. The actors also enjoyed their parts and “no animals were harmed in the production.”