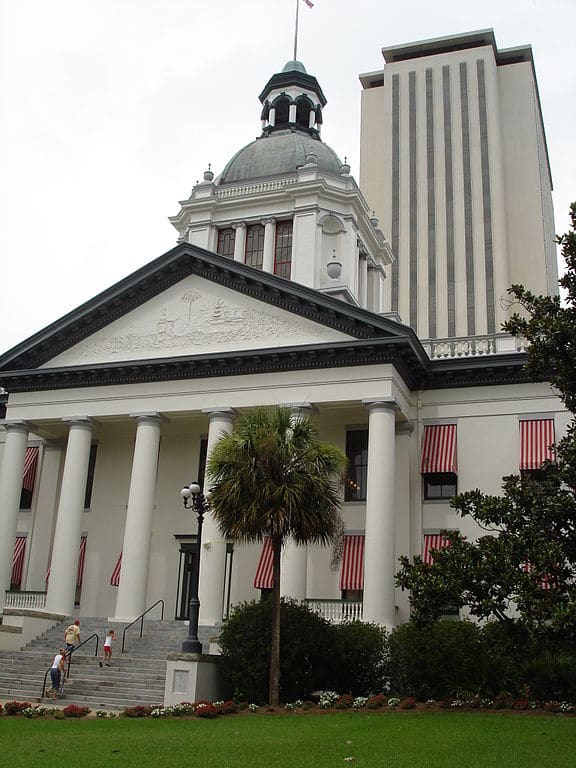 In October 2018, a discussion on the school district’s legislative priorities was held with their lobbyists, Shawn Foster and Sam Wagoner from Sunrise Consulting. The lobbying firm will represent the school district’s needs in Tallahassee for the upcoming legislative session . (Sunrise Consulting represents the City of Brooksville and the Hernando BOCC as well.)  The legislative platform was approved at the Dec. 11, 2018 school board meeting.  The article below details the district’s legislative priorities and decisions that transpired during the October meeting.

Transportation is a primary focus, particularly courtesy busing and reducing the number of students on buses to avoid overcrowding. The Florida Department of Education (FLDOE) provided approximately two-thirds of the $8 million the district needed for transportation during the 2017-2018 school year.

The state determines a district’s efficiency rating based on the number of eligible students transported and the number of routes. A student is eligible for transportation when they live outside a two-mile radius from their assigned school.

The more students the district can transport using a minimum of routes increases the efficiency rating. Transportation Director Ralph Leath explained the formula for determining the Average Bus Occupancy (ABO) is by dividing the number of students transported (11,261) by the number of bus routes (25).

Using the guidelines above, the FLDOE gave Hernando County an efficiency rating of 104.75%, with an ABO of 1.0879, making Hernando County the third most efficient school district in the state. With such a high rating, the district was awarded $5 million toward transportation funding last year.

If the district changes the seating for middle and high school students to two riders per seat, the efficiency rating will be lowered and FLDOE will provide less funding.  Increasing the number of buses to accommodate two riders per seat will bring additional costs for the district. Purchasing a bus is approximately $113,000. The cost to run the bus for the year is $50,000, which covers the driver’s salary, fuel, and any maintenance needs.

Should the district begin courtesy busing (providing transportation to students living 1 mile from their assigned schools and keeping the “three to a seat” guideline), an additional 25 routes/buses will be needed.  New buses will cost the district $2.8 million in initial outlay, and $1.25 million to run them annually.

By comparison, courtesy busing students living 1.5 miles from their school will require only 15 new routes and buses, again at three students per seat. The buses will cost $1.7 million to purchase, and the annual maintenance will be $750,000.

Reducing the number of students per seat for middle and high school students from three to two will make the bus ride more comfortable for students but will have a financial impact on the district. The transportation department has three bus sizes and the number of students each can carry varies according to the manufacturer’s recommendation. Depending on the bus size, the maximum number could be 65, 77, or 83 students.

School Board member Beth Narverud proposed that the legislative platform include a request that the school district should be allowed to provide courtesy busing to elementary school students at 1.5 miles from their assigned schools without being penalized by the FLDOE. Board Chair Mark Johnson asked Foster if he thought it would be likely that the State would then provide funding for those students.

Foster agreed that changing the policy, to allow courtesy busing of elementary students without penalty, might be considered. He did not think the State would agree to pay for it. Jordan reminded the board members of the cost to the district for new buses and drivers, even if there is no penalty.

Johnson believes that the goal would be to have the state provide that funding for additional equipment and drivers for the routes, if there were incremental changes over a few years’ time. Foster countered Johnson’s premise with a hypothetical response from the state: The penalty has been removed and the district has paid for the new buses and routes. Why should the state then be responsible for paying for them?

Jordan suggested a different strategy: Ask the state to fund at 100% rather than the 60/40 for the two-mile radius and remove the penalty for the courtesy busing at 1.5 miles. The district would fully fund the transportation needs for those students. Foster agreed with that suggestion.

Jordan recommended that while there are several other items on the list, and the method the school board decides the platform has worked well for many years, it was time to try something different. Jordan suggested limiting the list to only a few items so that Sunrise Consulting could lobby more effectively on the district’s behalf.

Johnson stated that the platform usually includes an “ask”, or a specific funding request, as well as several items that are priorities for the district. When discussing appropriations with legislators, Foster stated that they do not want large stacks of requests and information to read.

Speaking to Jordan, Johnson stated that her recommended approach seems to be what the district is already submitting. The legislative platform is important, Jordan said, but in face to face conversations, sharing the district’s priorities to the legislators “should be very lean, very clean…our essentials.”
Narverud asked about two other items on the list: teacher recruitment and Career and Technical Education (CTE). There were 78 open teacher position at the beginning of the 2017-2018 school year, and a similar number for the 2018-2019 school year.

Since requesting forgivable loans and service scholarships is a request that is either ignored or rejected each time it is brought to the legislators, Narverud suggested removing it. What will be requested under teacher recruitment is to reduce the cost of mandatory professional exams to $75 or allowing potential educators to submit a portfolio or an advanced degree.

With some CTE programs no longer in use, the district would like the flexibility to create CTE programs that will benefit Hernando County. Foster agreed this is a topic gaining speed as it has been a campaign issue in the governor’s race.

Linda Prescott expressed concern about the end of funding for Moton Elementary School’s School of Hope. The Parent Academy at Fox Chapel Middle School is reaching parents and doing well. Prescott would like additional funding to maintain it. Jordan offered her opinion that the best use of any resources would be in programs developed and initiated in Hernando County.

Programs initiated at the state level may be well meaning and funded initially, but if a school no longer meets the criteria and the funding is removed, maintenance of the program then becomes the responsibility of the district. That presents a funding challenge.

That differs from the Starfish or Seahorse programs, which are funded by Medicaid and will become self-sustaining as they grow. Superintendent John Stratton stated there are discussions with UCF to try to piggyback onto their grant for community school programs.

Narverud asked the $7 million question: Why is that much being requested to replace computers used by students? Jordan stated that it is an example of a single investment for something that is needed by students to “freshen” or help bring the technology up to date. With that assistance, and without what Jordan called a technology hole, making adjustments on a yearly basis would be easier for the district to handle.

Johnson disagreed. “I see that as detracting and the legislators losing interest in our platform at this time especially after (Hurricane) Michael and the rebuilding for eight counties in the Panhandle,” he said. “They want $7 million and we have billions of dollars in damages? I think we’re better off leaving that off the platform.” Johnson continued, concerned that it would antagonize the legislators to the point that Hernando County would receive very little for the district.

Jordan reminded Johnson that platform discussions began before Hurricane Michael hit the Panhandle. Some equipment is 10 years old, so upgrading is essential. Digital Classroom Program (DCP) funds range from $625,000-$825,000 annually and are never enough to meet the district’s needs. Stratton added that a minimum of $1.7 million annually over the course of five years (in addition to DCP funds) would allow the district to replace student-used computers.

Johnson again disagreed and Narverud suggested changing the request to an “ask” for community centers at schools. Prescott referred to Stratton and the possibility of the UCF grant. Jordan recommended gathering data from last year and this year to show the statistics and benefits of the programs, perhaps adding it to next year’s platform.

The $7 million appropriation request was removed from the platform. The priority list was shortened to include only the transportation request, teacher recruitment, and CTE program.

Johnson suggested requesting money to advertise VPK. Narverud suggested a statement that K-12 education supported VPK and Prescott agreed. Prescott noted that students who are properly prepared won’t need remedial classes when they get to college.

Board member Susan Duval was not asked her opinion during the meeting but asked to speak. Rather than eliminate the appropriation request altogether, she suggested requesting only one-third of the $7 million to at least upgrade a larger portion of the computers.

Foster suggested using the $1.7 million as mentioned earlier as it is a more reasonable amount. “I think anything is better than nothing,” Duval said, and Narverud agreed.

“The Hernando County School Board hereby requests additional state funding in the following areas: Appropriation – Technology: $2.3 million – Funds to be used for the replacement of student computers purchased in 2008.

“Priority Needs:
1. Transportation:
• Fund the transportation of all eligible students at 100%.
For school year 2017-18, Hernando County School District received 63% of funds needed to transport all eligible students. The remaining 37% was paid with General Funds.
• Remove the current penalty reducing the amount of transportation funds given to school districts that provide transportation to elementary students who live within 2-mile limit from zoned school.
o Currently, the funding formula is determined by an efficiency measure based on Average Bus Occupancy.
2. Teacher Recruitment:
• Reduce the cost of mandatory professional certification exams required for all potential educators to the previous fee of $75.00.
• Allow prospective educators to satisfy the General Knowledge exam with a portfolio option or an advanced degree.
3. Career and Technical Education (CTE) – The option for school districts to develop high-demand workforce programs is severely hampered by a lack of incentives to attract qualified instructors in areas such as coding, cybersecurity, health occupations and automotive repair limit options.
• Provide funds to allow for sign-on bonuses or other incentives to attract and retain qualified instructors.
• Allow school districts to meet the needs of their community by developing district-created CTE courses that meet academic standards and meet the demand specific to local workforce needs.
4. Early Learning – K-12 Education supports and encourages full funding of VPK education to ensure students are well positioned for future academic achievement.”