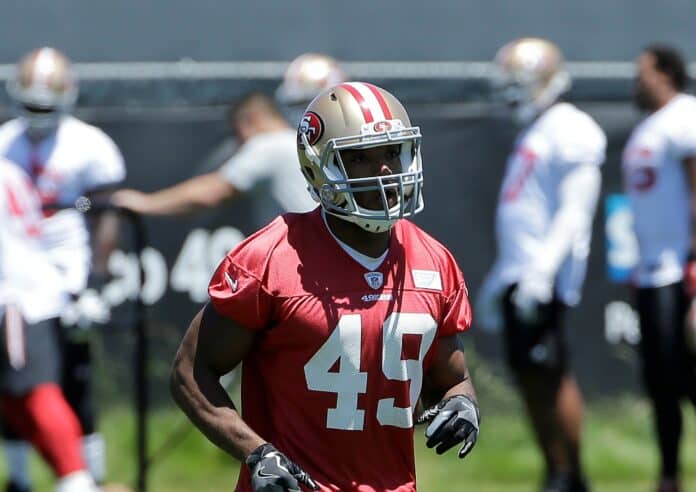 In today’s National Football League, it’s no easy task running for over 1,000 yards in a regular season. It’s a whole other animal when not many expected you to even come close.

That was the case for former Nature Coast running back Matt Breida, who is currently the starting tailback for the NFL’s San Francisco 49ers. The only problem for Breida at this point in the NFL campaign is he will fall just short of getting to the sacred mark of 1,000 yards rushing for the season.

The second-year running back suffered an ankle injury in the 49ers’ recent 14-9 loss to the Chicago Bears and will unlikely play in San Francisco’s season finale when they face the Los Angeles Rams on the road. It’s a tough break for Breida, who was at 814 yards rushing on the season, and was a long shot to reach 1,000 yards.

ESPN’s Adam Schefter broke the news on Breida’s injury via Twitter and it ends a very successful second season for the former Georgia Southern product. Breida was able to total between rushing and receiving 1,075 total yards from scrimmage for the 49ers. His best game of the season came back on September 16th against the Detroit Lions, when Breida rushed for 138 yards on just 11 carries and scored a touchdown.

Harris was able to move on and play at the National Football League as well after starring for Central and Troy, respectively. Drake after playing for Nature Coast, ended up suiting up for Western Michigan University. Breida was the second player who ended up in the NFL, being drafted San Francisco 49ers. Smith, who is now at Florida A&M, put up utterly ridiculous numbers his senior year and rushed for 3,715 yards in 2015.

The ‘Running Back Factory’ at Nature Coast is a tradition that has been kept up by current Sharks’ head coach Cory Johns, who produces another great one this past season in Michael Weston. Weston nearly rushed for over 3,000 yards on the season and led Nature Coast to the Class 5A, Region 2 final.