Local Father, Running his Heart Out 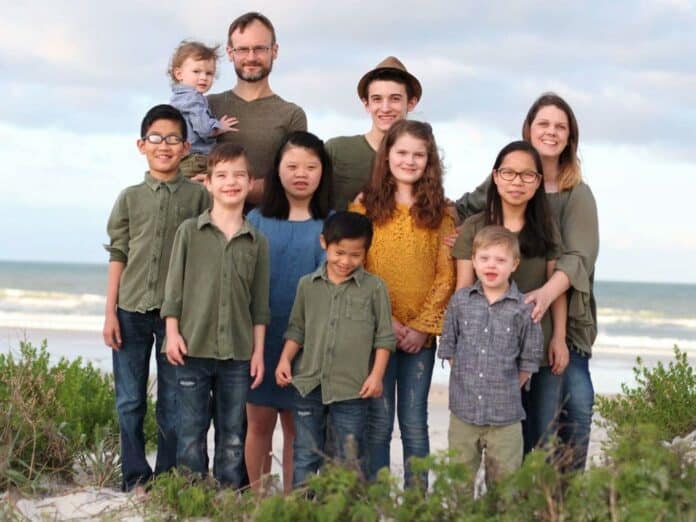 Completing a marathon, in itself, is a challenge, but to Jason Wetherington it is just one of many challenges he has faced and will be facing in the coming months. The forty-two year-old Brooksville father of nine recently competed in the Spring Hill Marathon, finishing tenth overall and third in his age division with a time of 3 hours, 34 minutes, 28 seconds.

His goal in running marathons is not just to test himself physically, Wetherington wants to use these races to raise money for the Ethan M. Lindberg Foundation, a non-profit organization that helps children with congenital heart disease and their families deal with this illness.

Wetherington and his wife Natalie know what it means to face these challenges. Their son, Isaac, was born  in October of 2010 with Hypoplastic Left Heart Syndrome. Tragically, after enduring three open heart surgeries, Isaac died in May of 2012. The couple dealt with their grief by helping others. Since that time they have adopted six children with special needs, two of them with heart disease.

“Isaac’s life, and death, radically changed our lives. He taught us to fight for the things that are really important in life. He taught us to be the voice for those who have no voice. It was part of the gift he left us. That gift led us to adoption. We learned that there were children with special needs, but they had no one to fight for them,” Wetherington remarks.

The couple’s fourteen year-old son, Brave, was ten when they adopted him from China. He had severe heart ailments and was considered terminal due to the complexities of his unrepaired heart. After two open heart surgeries and two cardiac catheterizations, he is thriving. Their son, Max, is almost 8 and was adopted from a Ukrainian orphanage when he was twenty-one months old. He has had three open heart surgeries and is doing amazing. Ironically, two of their biological children also have heart defects.

Three of their other adopted children have Downs Syndrome and another has Cerebral Palsy. Raising a large family is a challenge under any circumstances. Dealing with so many different special needs must be especially daunting, but the Wetheringtons seem to take it in stride.

“The biggest challenge has been standing alongside them to help them work through the trauma and neglect of the past. Healing broken emotional hearts and earning their trust is the hardest work, but it is minute in comparison to what they have had to endure,” Wetherington states.

To raise money for the Ethan M. Lindberg Foundation,Wetherington is planning two different events. His goal is $10,000 and so far he has raised $2,100.

The first will be Isaac’s Run, a 5K run taking place on March 2 at the Dade City campus of Pasco Hernando State College where he teaches Math. All proceeds from registration fees will go to the organization. For more information or to register go to  https://www.raceentry.com/race-reviews/isaacs-run. You can also “Like” their Facebook page: https://www.facebook.com/Isaacs-Run-785184508513565/

The Ethan M. Lindberg Foundation is also sponsoring Wetherington in the Boston Marathon that will be held on April 15. It has set up a page to raise money for his cause:  https://www.crowdrise.com/o/en/campaign/ethan-lindberg-foundation-inc-boston-2019/jasonwetherington?fbclid=IwAR2h7UdLIjWrpdMDxoBM2XMEyuVsNwPONbScBrfJnYH2odrPQlkQ1otKuGY

Despite his job as professor and his family duties, Wetherington finds time to train for these races, usually running seven to ten hours per week.

The two upcoming events will keep Wetherington busy for the next three months. His wife and children, who are champions in their own right, will be cheering on this champion every step of the way.

To contact Wetherington to help support his cause email him at [email protected].

Any donation, no matter how small, will be appreciated.