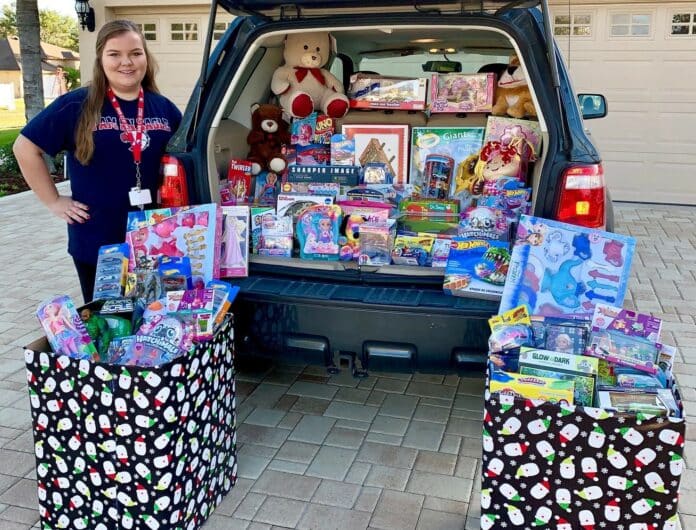 Ashlyn Ware knows what it’s like to be in the hospital. The fifteen-year-old Springstead High School freshman has been hospitalized three times in the past year or so. She was a patient at St. Joseph’s Hospital in Tampa undergoing tests and treatments for what the doctors believe is an autoimmune disorder. When she was hospitalized in December of 2017 she saw how the children reacted when they were given presents from a local organization and decided she wanted to do something similar.

Ashlyn is enrolled in the International Baccalaureate (IB) Program at Springstead High School and active in the IB Community Council. The IB Community Council is involved with various projects to help the community. She spoke with the Council’s sponsor, Mr. John Imhof, and brought up the idea of doing a toy drive for the children at St. Joseph’s Hospital. He liked the idea and her fellow students supported it enthusiastically.

“I made posters and put them up at the school. We got boxes and put wrapping paper around them for people to put the toys in. We had them make announcements to the students,” Ashlyn stated. “I wanted to brighten their [the patients’] Christmas a little.”

Before long, the students had collected 125 gifts. These were toys and other items suitable for patients ranging in age from babies to teenagers.

“Our school really came together,” remarked Ashlyn. “I was blown away by the generosity of the people at my school.”

On Dec. 22 she packed all the gifts into her mother’s SUV and delivered them to the children at St. Joseph’s. The children then picked out a gift that they liked. Because many of the patients were isolated due to suppressed immune systems, Ashlyn was not able to see the smiles on their faces. However, the Child Life department at the facility wrote a thank you letter to Ashlyn and the IB Community Council.

It read in part: “It’s very hard to be a child in the hospital and even the smallest gestures can give so much joy to a child and their family. …thank you for being so thoughtful. You are appreciated.”