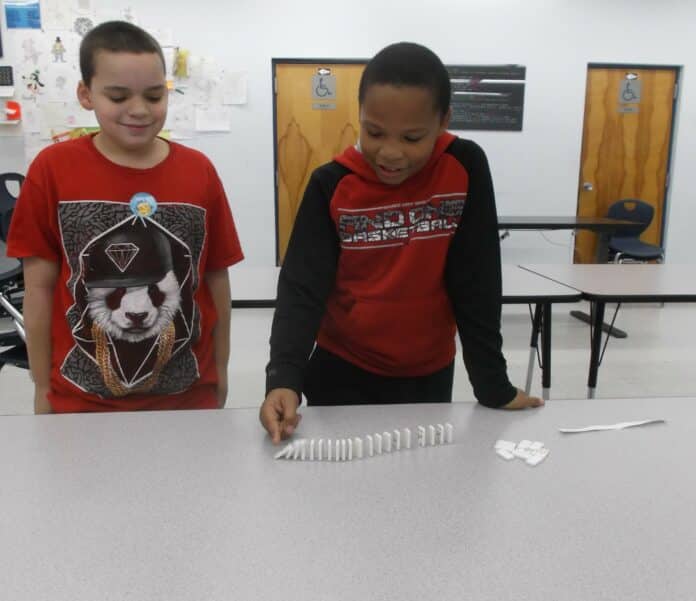 Thursday evening, January 17, 2019 the Science department at Fox Chapel Middle School held a Parent Involvement Science Night. The purpose was to get parents to participate in their children’s education, show the students practical applications of what they learned in their classes and to have fun. Taking part in the event were six science teachers, an ESE (Exceptional Student Education) teacher and a Title 1 facilitator. The team of instructors had worked for a couple of months on preparing the event.
“We want to reiterate the content of the classes in an integrative way using technology,” stated 7th grade Science teacher, Mrs. Michelle Davey.
The group of approximately 150 sixth, seventh and eighth graders and many parents gathered in the media center where Mrs. Davey briefed them on the procedure. They broke into teams of  two to five students. Parents could accompany the team and participate if they wished. Each group received a map of the school showing the eight science classrooms where they would perform a science activity or “challenge.” On the map was a different icon corresponding to each classroom. The team leader was in charge of a smartphone that they used to log in with a password and download an app.
Mrs. Davey instructed each team to pull a particular challenge and then proceed to that classroom. Once the team finished the challenge they were to answer a true/false question and have a group picture taken to show that they completed the challenge. The activities centered on biology and physical science.
Once the teams finished all eight challenges they were to come back to the media center to check in with one of the science teachers. The first three teams to finish would win first, second and third place awards.
For example, in one classroom the students were instructed to take ten helium balloons and tie them to one of the people in the group. Then they had to answer the statement: “True or False: Helium is the most abundant gas in the world, making up 24 percent of earth’s mass.” The answer was “False.”
In another classroom, the students were given a set of small dominoes that they had to stand on end in a row. Then they pushed the first domino in such a way that it would make all the others fall. They then had to answer the question: “Does the first domino fall due to the force of gravity?” The answer was “No.”
Throughout the evening, students, as well as parents, had a good time performing the
challenges. Winners were announced the following day.