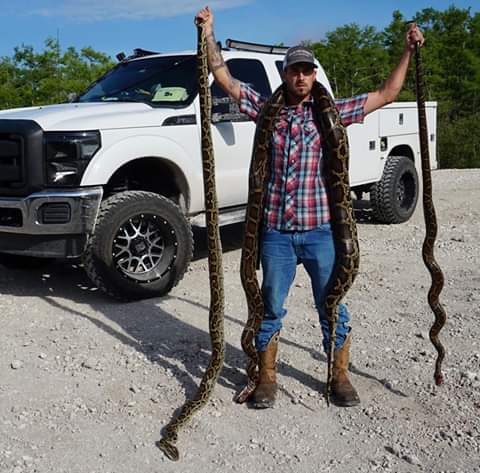 Deer season is over, turkey season is so far away and you really haven’t a need for fresh pork, what do you do?  Squirrel hunt, obviously. And, I was all set up to spend a long weekend chasing those bushy-tailed tree-rats this past weekend.  That is, until an invitation was extended to me to take a ride down south and hunt Burmese pythons in the Everglades with Florida’s own, Python Cowboy, Mister Mike Kimmel.

Now Mike has been a huge part of the South Florida Water Management District’s, Python Elimination Program, via his company Martin County Trapping and Wildlife Rescue.  If you’ve ever seen the TV show Swamp Mysteries with Troy Landry, Mike was his guide to catching huge pythons. Since then, Mike has been contacted by the Discovery Channel and is currently filming his hunting techniques for their upcoming series, Wild Men of the Glades.  So I assure you, it was quite an honor to me, being on the receiving end of such an invitation!

In preparation of the hunt, I was gathering my gear and had decided that a .410 shotgun with 3”, #4 shot should be enough medicine to tame the wildest serpent.   However, Mike later explained to me that the hunt was to be conducted by live catch. Yep, I was supposed to get in the swamp and catch them live with my bare hands, as he’s been doing for years.  Well, I’m not entirely too fond of snakes, although they do make some killer chili, since losing part of my left foot to a cottonmouth strike back in ’97. So, I picked up my phone and called up the most fearless of all of my hunting buddies, a prime example of the liberal’s so-called, “Toxic Masculinity”, Miss Meghan Bailes.

Meghan jumped at the chance to rescue me and volunteered to brave the Everglades with the intent of catching pythons.  Friday morning arrived with Meghan and I driving South to Ochopee, Fl to meet up with Mike and begin our hunt. Now, if you don’t know where Ochopee is, don’t worry, nobody else does either!  It’s the tiniest spot of dry land in the Everglades featuring the locally famous Tippy’s Outpost, where we met. Mike was genuinely, one of the nicest guys we could have wanted to spend a day with and was an enormous wealth of information on not only the Burmese python’s, but of all invasive species throughout the region and of the environmental distress brought about by their encroachment.

Only one python was captured that morning, an eight foot long male, which Mike and Meghan handled with great care.  I’ve some awesome video of them doing the “snake dance” tiring out the snake before Meghan reached in with mongoose speed and secured the head.  It was pretty intense!

I had asked Mike about any dangers inherent with his job as these are predators capable of eating humans and surprisingly, he had only found himself on three occasions of getting wrapped up in the big squeeze, and immobilized.  Fortunately it wasn’t one of the days he was hunting solo and he was able to call in some help. Otherwise, he’d have been another statistic in the list of men who’ve disappeared in the Glades and not heard from again.

These invasive snakes have been absolutely wreaking havoc in the Everglades ever since Hurricane Andrew passed through, destroying some Python sanctuaries and setting the big snakes free.  Mike shared with us some first-hand accounts of freeing native alligators from the death wrap of some mighty big snakes, the largest he has caught having measured just shy of eighteen feet long!  Meghan and I will be returning to the Glades with Mike in the future to try hunting them at night. It’s a trip I’m already looking forward to.

For any of you getting outdoors this weekend, I wish you the best of luck!  And as always, I’d love to hear about your adventures and maybe see a photo or two of your successes at [email protected]  God bless and good hunting!