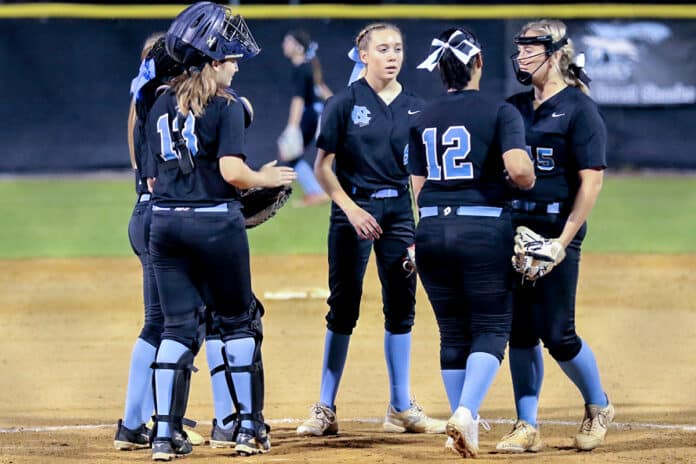 The second game of the night featured the Dunedin Falcons vs Nature Coast Sharks.  The field is getting prepped for the game, first crowd leaves and the Falcons and Shark fans settle in to get their best views of the field.

Dunedin Falcons #1 Amanda Goodapple is the first to step up to the plate and face Nature Coast pitcher #12 Sr. Alanis Berrios. Goodapple hits a shot out to center field and was caught to give the Sharks their first out of the game. Falcon#14 Makayla Oster, struck out which brought up the third batter for the Falcons #11 Brianna Duttry who tipped the ball and got on first. With 2 outs and #11 Duttry on first, #26 AJ Rohrer was walked to first. Falcon #17 Liz Haley hit a drive to second and was thrown out on first- three outs for the Sharks.

Bottom of the first inning, the Sharks will go up against Falcon pitcher Alissa Mankiewich.  First up for the Sharks #1 Morgan Johnson. Johnson hit a fly out to center field which was caught, giving the Sharks the first out. Next up to bat #4, Tori Ratigan, with one out Ratigan bunted and got on first. Shark #12 Alanis Berrios stepped up to plate with #4 Ratigan on first. The ball is pitched and #4 Ratigan steals second, #12 Berrios hits a line drive down third and gets on first while #4 Tori Ratigan runs home for the first run of the game. Sub Shark#14 Ava Rozsa comes in for #12 Berrios. Sharks #15 Alyssa Kelly steps up and hits another down third base. Falcon third base player throws Kelly out at first for the second out. Shark #3 Jiena Carrera, fouls out numerous times then walks to first with ball four. Shark #8 Jen Hackett pops up around second base, Falcon shortstop calls it and caught for the third out ending the first inning.

Top of the Second: Falcon #7 Grace Mclemore strikes out, next up is Falcon #10 Annalisa Mercer who was walked to first. Falcon #5 Madison Held comes up to the plate with #10 Mercer on first. Mercer hit a drive to the second baseman. Shark shortstop covered second and got Mercer out on second. Sharks tried for a double but Falcon Madison Held was safe on first. Falcon #2 Khloe Croce steps up with two outs and a player on first. #2 Khole Croce struck out, bringing the top of the second inning to a close.

Bottom of second Sharks up. Sharks are still going up against Falcon pitcher 00 Alissa Mankiewich. Shark #13 Kaitlyn Black steps up, hits a drive to second and is thrown out on first. 1 out for the Sharks. Arianna Calhoun #11 comes up for the Sharks hits a drive just over the reach of the Falcon shortstop, Calhoun gets on first. Alexis Lendo #2 lefty comes up, the ball is pitched and #11 Calhoun attempts to steal second but Falcon Catcher throws to second and Calhoun is out. That makes it two outs for the Falcons. Lendo hits down third, third baseman misses and shortstop picks it up. Lendo makes it to first. Shark #1 Morgan Johnson is up, with #2 Lendo on first. Lendo successfully steals second. Johnson hit a drive to the second baseman which was dropped- Johnson on first, while Lendo is rounding third going for home. Lendo was met at home plate by Falcon #26 AJ Rohrer. Falcon Rohrer had caught the throw from her second baseman and stopped Lendo dead in her tracks for the third out. It was a hard stop by Rohrer.

Now it’s top of the third inning. Falcon #1 Amanda Goodapple up again, which flies out to left field. 1 out. Makayla Oster #14 fouls out, with a full house Oster is walked to first. Brianna Dutty #11 is up with Oster on first. Oster steals second off a bad pitch. Falcon #11 Brianna Dutty hits a double out to center field which brought Oster home for the Falcons first run. It’s a tie game 1 to 1. Falcon #9 Tikaiya Mcduffy hits a drive fly down first and it’s caught, two outs. Dutty is still sitting on second base as #17 Liz Haley and hits a drive to the pitcher, third out.

Bottom of the third and sharks come up to the plate. Shark #4 Tori Ratigan is up, it’s a pop up caught by the third baseman, 1 out. Alanis Berrios #12 steps up, hits it out to left field and it’s caught making it 2 outs for the Sharks. With 2 outs facing the Sharks #15 Alyssa Kelly gets up and strikes out, ending the bottom of the third.

Going into the top of the fourth inning, Falcon # 7 Grace Mclemore strikes out, 1 out. Annalisa Mercer #10 steps up to the plate for the Falcons and was struck out – making it two outs. Falcon #5 Madison Held tips a pitch going down first, Sharks first baseman picks up and tags Held out running to first. 3 outs.

Top of the fifth inning. Falcons have to face a new Nature Coast pitcher #15 Alyssa Kelly. Falcons #3 Abby Hamm steps up to the plate and was struck out. Out 1. Next, up #1 Amanda Goodapple hit a drive to the shortstop who threw Hamm out on first. Out 2. Falcon #14 Makayla Oster rallies her team with 2 outs, but she was struck out.

Three up three down, now it’s bottom of the fifth. Nature Coast is up to bat and still going up against Falcons pitcher 00 Alissa Mankeiwich. First Shark up this inning is #10 Kalynn Callari, Kalynn went down swinging with the first out for the Sharks. Next #2 Alexis Lendo a lefty, hit a drive to the pitcher and threw her out at first for the second out. Shark #1 Morgan Johnson comes up to the plate with two outs against the Sharks, Morgan pops up and infield Falcon third baseman calls and makes the catch for the third out. Another 3 up 3 down inning.

Top of the sixth inning and the Falcons step up to plate again. The score is still tied. First Falcon up is #11 Brianna Duttry goes against Sharks pitcher #15 Alyssa Kelly. Kelly struck out Brianna for the first out. AJ Rohrer #26 line drives down third base and it’s caught for the second out. Falcon player #17 Liz Haley steps into the batter’s box and strikes out for the third out for the Falcons.

Bottom of the sixth, Shark #4 Tori Ratigan lefty, hits to second and is thrown out on first. Up next #12 Alanis Berrios hits just over the second baseman and got a single. With Berrios on first, #15 Alyssa Kelly hits straight to the pitcher and is taken out, while Berrios advances to second. Shark # 3 Jiena Carrera flys out to right field and Falcon right fielder made a great catch bringing it to three outs for the Sharks.

It’s top of the seventh, Falcons need to step up to the plate to make something happen. The score is still tied 1 to 1. Falcons #12 Allyson Kifer batting up against Sharks pitcher #15 Alyssa Kelly. Kifer hits directly to the pitcher and is thrown out on first. 1 out. Annalisa Mercer #10 hits to right field and it’s caught for the second out. Madison Held #5 infield pop up to Sharks shortstop and it’s out 3 for the Falcons.

Bottom of the seventh, Sharks #6 Dom Sekelsky stepping up to the plate with Falcons pitcher #00 Alissa Mankiewich. Mankiewich throws a fast-pitched strike to start the inning. Sekelsky hits an infield pop up to first base caught by Falcon #26 AJ Rohrer for the first out for the Sharks. Sharks #7 Harper Bunn, lefty, hits a shot down third and is safe on first. Falcon catcher is watching Bunn on first and attempts to take her out, the throw was almost missed to Falcon #26 AJ Rohrer. Shark #11 Arianna Calhoun hits to first and is taken out on first while Bunn advances to second. Alexis Lendo #2 is up with two outs against the Sharks.  There is a full house, and Lendo eyes the ball well – the fourth ball is called and she walks to first. Sharks batter #1 Morgan Johnson has the pressure built up with two outs and players on first and second. Falcon catcher seems a little shaken with 2 players on bases. Johnson takes the pitch and hits a drive to the second baseman and was thrown out on first for the third out.

A game is over and ends in a tie 1 to 1. No overtime in preseason is the reason for the game ending in a tie.