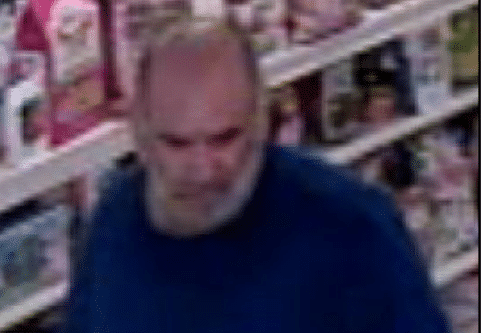 On 02-19-19 just after 4 p.m., Hernando County deputies were dispatched to the Dollar General store, located at 331 Commercial Way in Spring Hill, regarding a Commercial Robbery.

Upon arrival, deputies met with the clerk who advised that a white male approached the register with some candy.  As the clerk was scanning the items, the male stated, in a deep voice, to “keep the register open.”  The clerk believed the male needed change and was not initially alarmed.

When the cash register drawer opened, the male (suspect) began reaching into the drawer and grabbing at the cash.  The clerk grabbed the suspect’s hands in an effort to restrain him but soon lost his grip.  The suspect then pushed the clerk backwards and away from the register.  The suspect continued pulling cash from the register and then fled from the store.

The suspect was described as a white male, mid 50’s, weighing approximately 240 pounds.  He had dark eyes and salt/pepper hair that was balding on top and he was clean shaven.  He was wearing a blue t-shirt and khaki pants.  The suspect had an unknown tattoo on his right forearm.

Witnesses reported seeing the suspect get into what they believed was a newer model, white Dodge Caravan that was parked facing the store, just south of the front doors.  The suspect then backed out and left northbound through the parking lot toward Caribbean Drive, then southbound on Commercial Way at a high rate of speed.

When pulling out onto Commercial Way, witnesses stated it appeared a Mercedes Benz almost struck the white Dodge Caravan.  The driver of the Mercedes continuously beeped the horn at the van until they were out of sight.

Just before 4:30 p.m., deputies were dispatched to the Beall’s Outlet, located at 1460 Pinehurst Drive in Spring Hill, regarding a Commercial Robbery.

Upon arrival, deputies made contact with the clerk who advised that a white male, matching the description from the previous robbery, approached the register with a soda and a pair of shoes.  As the clerk began to process the transaction, the male leaned over the counter, closer to the clerk, and whispered, “This is a robbery.”

Witnesses at this location also described the suspect vehicle to be a newer model, white Dodge Caravan.

Detectives are currently investigating both cases.

If you have information on these cases or the individual responsible for these crimes, please contact Detective Jason Tippin at 352-754-6830.

If you would like to remain anonymous – Please call Hernando County Crime Stoppers at 1-866-990-TIPS (8477) or submit your tip via the internet at http://www.hernandocountycrimestoppers.com .  You will remain anonymous and also be eligible for a reward up to $1,000 cash!