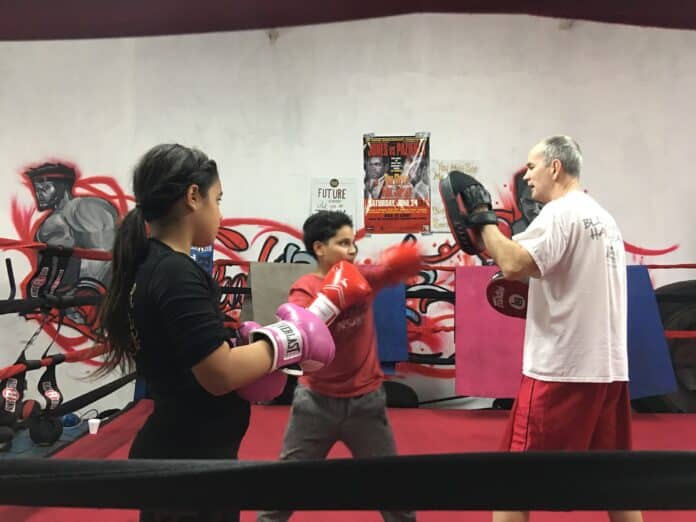 Jackie Wilson was nine years old when his father died and eleven when his older brother died. He was close to his father and the brother he lost was the one who taught him basketball. He was hurt and angry at the whole world. Fortunately, not far from his home in Jersey City, New Jersey, was a boxing club and there, Jimmy ‘The Cat’ Dupree, took young Jackie Wilson under his wing and mentored him.

Boxing became an outlet for his energy, stress, and frustration. Dupree spent time with Jackie and taught him things his father might have taught him had he lived. Wilson says he will always be grateful for Jimmy Dupree and for the lessons he learned as an AAU boxer.

While serving in the Army, Wilson was put on the boxing team, Team USA, and boxed throughout his service. Two brothers and two cousins of Wilson are pro boxers and several other family members are amateur boxers.

Recently, Wilson wanted a new direction for his life; he wanted to help people and fight PTSD. He did a personal inventory and the best he could offer others was the skill he knew best – boxing, so he began teaching others to box in his garage. When he became too popular, his wife suggested he find a better location for his avocation. So in January 2018, Wilson opened Shaquille’s Boxing Club Operation Turnaround, in a warehouse near Cortez and Sunshine Grove Road.  The club is named for his youngest son.

Wilson volunteers, along with Larry ‘The Destroyer’ Thorogood, a former Golden Gloves boxer and Norman Hill, former fire department Lieutenant, to spar and coach adults and children from 5 PM to 9 PM Monday through Friday. Adults pay a small fee, enough to cover the overhead but the children are free. Some of the children are at risk and complete their court-ordered community service at the gym, as Wilson works with youth court and probation. Children and adults work out, side by side; everyone is treated with respect and there’s a spirit of camaraderie in the club.

Boxing is great exercise and good for self-defense. It builds confidence for children who have to deal with bullies. Boxing is good for building not just strength, but stamina as well. And it teaches discipline. Wilson says one other important thing boxing teaches a person is not to fight. A trained boxer can do damage fighting with an untrained person. Wilson says well-trained boxer will just say, “I don’t want to fight you,” and just turn around and walk away.

On Mondays, at 5 PM, Jonita Saint-Leger, MFA, BA psychology, author, poet, public speaker, of the Royal Writer’s Organization, conducts workshops at the gym to help young writers discover their poetic style. She helps with all writing, from playwriting, songwriting,  resumes to how to write a personal essay for college acceptance.

Currently, Wilson has two novice fighters, Isaiah and James, who will be competing in Tampa next month, and several more in the pipeline. Wilson won’t let any children compete until he’s sure they’re ready.

After a little more than a year, Wilson says, “The gym has become a place where children and young adults can come to a safe place and have fun and at the same time learn to deal with life issues plus get in shape at the same time.”

Shaquille’s Boxing Club Operation Turnaround is a 501c3 non-profit organization serving Hernando County and is a member of the USA Boxing Team of Colorado Springs, Colorado. Some local companies have helped financially and Wilson plans to apply for grants. The club is open 5 PM to 9 PM Monday through Friday and is located at 13418 Chambord Street in Brooksville. For information see their Facebook page or call 732-289-8778.

Leslie Stein
Leslie Stein has over 35 years experience as a Speech-Language Pathologist working with neurologically impaired adults. She received her undergraduate and graduate degrees at the University of South Florida in Speech Pathology.
Share
Facebook
Twitter
Email
Previous articleMinistering to the Hungry and Homeless
Next articleI-75/SR 52 Ramp
RELATED ARTICLES
Uncategorized