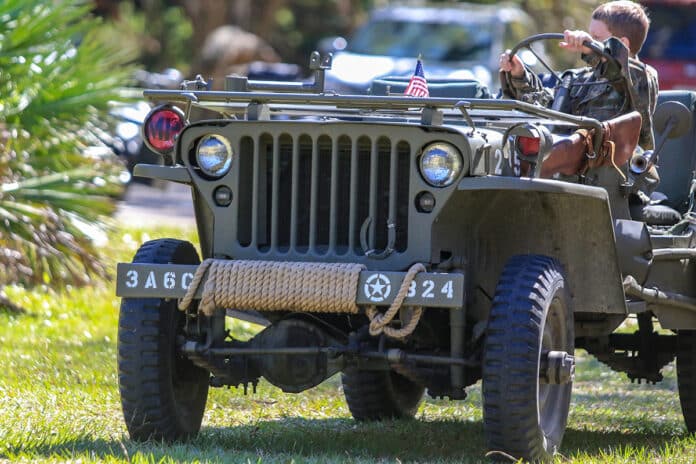 “We are sharing the culture of times of the 1940s particularly during the war years, not only military culture but civilian culture,” said Steven Rinck President of the Dade Battlefield Society.

Popular battle scrimmages of German versus Allied forces took place during this event.  However, Mr. Rinck explained that recently there have been concerns over these scrimmages due to the appearance of (WWII era) 20th-century weapons.

“We still have our weapons here, but we don’t fire them anymore for that purpose,” Rinck said.

“I think it’s a blessing in disguise,” Rinck said. “This has encouraged us to produce more activities for the public.”

During events like these, some living historians also interact with the public as a ‘first-person,’ meaning they are acting as though they are currently in that era. They will hold a conversation as if they are that civilian or soldier during that time period.

During the event, his unit was showing a representation of what the First SS would be doing while off the front lines, during rest and relaxation.

“We portray a pioneer unit. Basically, we were sent out to disrupt tanks, barricades and blow things up,” Grauds explained.  “We have a wide variety of original pieces (tools and equipment) that we display of that particular unit.”

Grauds also stated, anything that has to do with a historical aspect is important and that we tend to forget our history.

“It’s extremely important to share the information, to share how a combat soldier lived on their side,” Grauds said.

Visitors could hear music from the 1940s over the intercom as men and women reenactors wearing WWII era apparel and uniforms performed daily routines.

Each site had a representation of authentic memorabilia during WWII with living historians available to answer any questions as well as to provide educational information.

“Our country is almost 250 years old, and we have to remember that it wasn’t developed the day before yesterday. There are also lessons from that time we need to maintain,” said Rinck.