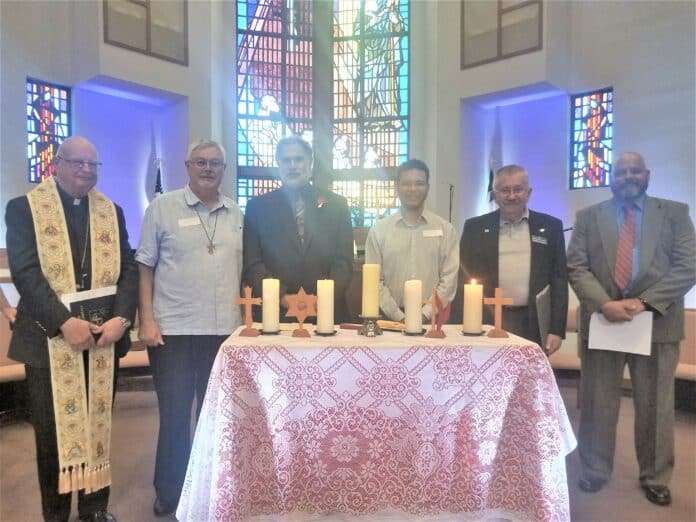 On February 3, 1943, 676 souls were lost aboard the USS Dorchester.  Among the perished were four chaplains, of four different faiths, who provided prayer and comfort to the men who would die at sea with them.

Spiritual leaders representing each faith of the fallen chaplains told their individual stories.

Dorchester’s Captain, Hans Danielson was concerned and cautious.  He knew he was in dangerous waters when the Tampa reported submarines nearby.
German U-Boats were well-known in the area, and several ships had been lost to their offense.

Only 150 miles from its Greenland destination, the Dorchester, Captain Danielson told the men aboard to sleep in their clothing, and to keep their life jackets on.  Many soldiers sleeping deep in the ship’s hull disregarded that order because of the engine’s heat. Others ignored it because the life jackets were just uncomfortable.

On February 3,  at 12:55 AM a periscope broke the chilly Atlantic waters.  Through the crosshairs, the officer aboard the German sub, U-223, spotted the Dorchester.  The sub approached the convoy on the surface.  After identifying and targeting the ship, he gave orders to fire torpedoes.  Three were fired.
The first, decisive and deadly, struck the starboard side of mid-ship, far below the water’s line.

Captain Danielson alerted that the Dorchester was taking on water rapidly and sinking, gave the order to abandon ship.  In less than twenty minutes, the Dorchesters slipped beneath the Atlantic’s icy waters.

While communications were knocked out to the escorting vessels, the Comanche saw the flash of the explosion and responded, and rescued 97 survivors. Escanaba circled the Dorchester and rescued another 132.  The Tampa continued on, escorting the remaining two ships.

Aboard the Dorchester, panic and chaos had set in.  The blast had killed scores of men, and many others were seriously wounded.  Others, stung by the explosion were groping in the darkness.

Those sleeping without clothing rushed topside, where they were confronted first by the icy Atlantic air, then by the knowledge that death awaited them.
Men jumped from the ship into lifeboats, overcrowding to the point of capsizing, according to eyewitnesses.  Other rafts, tossed into the Atlantic, drifted away before soldiers could even get into them.

A young private found himself floating in oil-smeared waters, surrounded by bodies.  “I could hear men crying, pleading, praying …  I could also hear chaplains preaching courage.  Their voices were the only thing that kept me going.
Petty Officer John Mahoney tried to re-enter the cabin, but Rabbi Goode stopped him.  Mahoney, concerned about the cold, told the Rabbi he had forgotten his gloves.  Rabbi Goode told Mahoney, “I have two pairs,”  then gave the petty officer his only pair of gloves.

By the time Mahoney realized that Rabbi Goode didn’t conveniently carry two sets of gloves, most of the men were topside, and the chaplains and other crewmen were handing out lifejackets.

They simply gave the life jackets to the next man in line.

As the ship went down, the chaplains banded together in prayer and sang hymns of praise as the Dorchester sank.

As the news reached the shores of the United States, the nation was stunned by the magnitude of the tragedy, and the heroic conduct of the Four Chaplains.

Rabbi Reb Tuvia of Temple Beth David lit a candle in memory of Chaplain Alexander D. Goode.  Goode was an outstanding athlete and scholar, Goode was known for his laughter and love of life.  While studying to be a Rabbi, Goode joined the National Guard.  The return of the body of the Unknown Soldier had a profound effect on Goode; he walked thirty miles to attend the ceremony because he thought it showed more respect than driving or taking a bus. Goode had married his high school sweetheart, and was serving in a Synagogue in York, PA when WWII started.  He began active duty on August 9, 1942.

Reverend Greg Freeze of the First United Methodist Church told the story of Chaplain George L. Fox, who was the oldest of the four.  Fox began his service in the Army in 1917, and earned a Silver Star for rescuing a soldier from a battle field filled with poisonous gas, the Croix De Guerre for withstanding an artillery barrage and a Purple Heart for being wounded in battle.

Fox was a successful accountant and family man from Vermont who was ordained as a Methodist minister before WWII.  When the war started, he said to his wife, “I’ve got to go … they need me.”  Fox’s service began August 8, 1942.

Deacon Clyde Rosten of the Nativity Lutheran Church introduced Chaplain Clark V. Poling as a leader of the Dutch Reformed Church – a protestant denomination which began in the Netherlands.  Poling was the seventh generation of his family to be ordained in the church.  When war came, he was anxious to go, but not as a chaplain. “I’m not going to hide behind the church in some safe office.  I’ll go to the firing line,” he told his father.  The elder Poling replied, “Don’t you know that Chaplains have the highest mortality rate of all?”   Before Poling left for duty, he said, “Pray for me.  Not for my safe return, that wouldn’t be fair … just pray that I will be adequate.”   His service began on June 10, 1942.

Edward Sweeney of the St. Vincent De Paul Catholic Church recounted the story of Chaplain John P. Washington, who grew up “poor, scrappy and determined in the toughest section of Newark, NJ.  Washington, who was blessed with a sunny disposition and beautiful singing voice, was one of nine children born to Irish immigrants.  He also loved a good fight, and was the leader of a gang when he was called to the priesthood.

Washington was playing ball with children in his parrish and organizing sports teams when the war broke out.  He began active duty on May 9, 1942. It is said that his wonderful voice, raised in song and prayer to comfort those around him, could be heard until his final moments.

Tony Graham of the Hernando County Veterans’ services lit a candle for the other 672 servicemen who perished that day.  There were 230 survivors of the tragedy who lived to tell the story of the brave chaplains who gave all for their fellow shipmates.

Following the honors,  Fran Finley was recognized for her work in organizing the ceremony.  Also recognized were Annette Snyder and John Motzer.