HomeUncategorized'Bleacher Talk, Play by Play' Lady Eagles take on Sharks in the...
Uncategorized 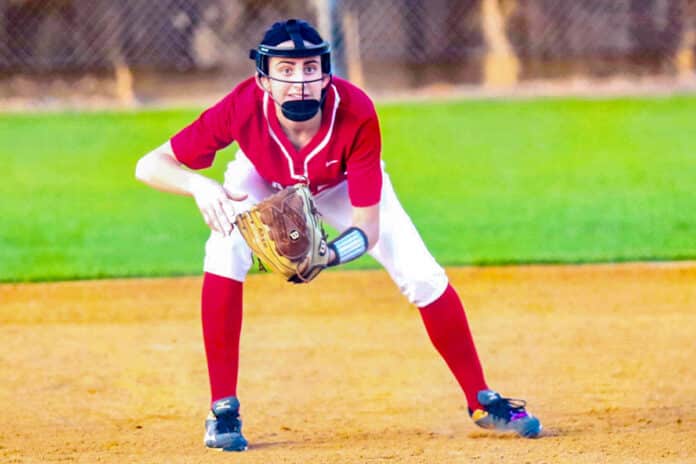 Wednesday March 13, 2019 at Nature Coast High School, it’s a clear nice cool night for girls softball. Players are introduced and team stats provided. Springstead Eagles have five wins and two losses, while Nature Coast has four wins and three losses. Both teams stand on the field for the National Anthem, some players swaying side to side in anticipation of the game. End of the Anthem you can hear cheers echo in the cool night. Let’s play ball.

Top of  1st inning.
Eagles #3 Sr. Emily Kolwicz is the first to step up to the plate. First pitch was thrown by Nature Coast pitcher #15 Jr. Alyssa Kelly, which came in strong and fast. Kelly struck Kolwicz for the first out of the game. Second stepping up to the plate Eagles #44 Jr. Hannah Rizzuto, hit a line drive straight to first baseman and was caught for the second out. Next up is Eagles #21 Sr. Mariah Galhouse which popped up a fly around second base which was caught by Shark #6  Fr. Dom Sekelsky for the third out.

Bottom of 1st inning
Nature Coast first batter #1 Jr. Morgan Johnson a lefty will be going up against Eagles pitcher #21 Sr. Mariah Galhouse. Johnson tried to stay in it, but Galhouse struck Johnson out. Next another lefty steps up, Shark #11 So. Arianna Calhoun. Calhoun gets a base hit right over Galhouse into center field. Shark #12 Sr. Alanis Berrios pops up to second, Eagles #7 Sr. Madisoon Dicono made the catch earning the second out.  Shark #9 Jr. Jailene Gonzalez gets up to bat, with Sharks #11 So. Arianna Calhoun on first. With a wild pitch, Eagles catcher #52 So. Raquel Camuglia misses the pitch and Calhoun steals second. Gonzalez hit down first baseline which is caught making it three outs.

Top of 2nd inning
Springstead #6 Jr. Jenna Ryan steps up and hits to Sharks shortstop. Sharks shortstop throws to first base but dropped the ball- Ryan safe on first. Next up Eagle #52 So. Raquel Camuglia with #6 Ryan on first. Camuglia hits straight at the Sharks pitcher Alyssa Kelly, Kelly spins and takes Eagle #6 Ryan out on second for first out. Eagle #10 Sr. Brooke Ayo steps up and strikes out leaving Camuglia on first. Springstead #7 Sr. Madison Dicono steps up to the plate and hits fly out to left field for a base hit, #52 Camuglia goes to second and #7 Dicono on first. With two outs against the Eagles #26 So. Tiana Stifanic steps up to the plate and is struck out making three outs.

Bottom of 2nd inning
Nature Coast is up to bat, Eagles pitcher #21 Mariah Galhouse strikes out the next three Sharks batters. Sharks #15 Jr. Alyssa Kelly out 1, #3 So. Jiena Carrera out 2, #13 Fr. Kaitlyn Black out 3

Top of  3rd inning
Eagle #1 Sr. Mackenzie McIntyre hit a short bounce to pitcher, which ran up on ball to pickup but missed and McIntyre safe on first. Eagle #3 Sr. Emily Kolwicz up next, pitch is thrown, catcher misses and McIntyre steals second. Kolwicz bunts, pitcher picked it up and throws to first- out one. First base throws to third, tagging runner for the second out. Nature Coast completes a double play. Eagle #44 Jr. Hannah Rizzuto is walked, then  #21 Sr. Mariah Galhouse pops up the ball.  It is caught by second baseman for the third out.

Bottom of 3rd inning
Nature Coast up to bat #6 Fr. Dom Sekelsky starts the Sharks off with a tipped ball. Sekelsky runs to first but is taken out. Next up is So. #2 Alexis Lendo, a lefty. Eagles pitcher Sr. Mariah Galhouse hits Lendo right on her elbow. Lendo earns a free walk to first. Back to the top of the Sharks lineup #1 Jr. Morgan Johnson- also a lefty, #2 Lendo is on first. The ball is pitched and Lendo steals second, sliding into base and quickly standing up. Again Lendo is going to steal third, Eagles #52 gets the ball and was supposed to throw to third but ended up throwing into center field and the ball rolls. Lendo takes the opportunity to bring it home for Nature Coast’s first run of the game. Johnson makes the second out for the Sharks. With two outs against the Sharks, #11 So. Arianna Balhoun takes the plate but is struck out, which makes three outs for the Sharks.

Top of 4th inning
Score at the top of the fourth: Springstead 0 – Nature Coast 1 . The first Eagle up to bat is #6 Jr. Jenna Ryan fouls back and then POW- hits the ball just out of reach of Nature Coast pitcher #15 Jr. Alyssa Kelly right into center field. A perfect base hit putting Ryan on first base. Next up is Eagle #52 So. Raquel Camuglia. She hits a ground ball to second baseman who passes to shortstop covering second and Nature Coast gets the first out. Eagle #10 Brooke Ayo hits a bounced ball to pitcher and Ayo is thrown out on first for the second out. Camuglia advances to second. Next up is Eagle #7 Madison Dicono. She fouls out to right field, another foul, then she hits to shortstop. Shortstop runs into Camuglia and drops the ball. Camuglia is now on third base and Dicono is on first. With two outs against the Eagles #26 So. Tiana Stifanic steps up to the plate and hits out to right side of center field, Camuglia and Dicono make it home. Springstead has 2 runs. Eagle #14 Jr. Lourdes Penichet hits to second baseman who fumbles the ball, allowing Penichet to get on first. With two outs Eagle #3 Emily Kolwicz hits straight at second baseman and it’s caught for the third out.

Bottom of 4th inning
Nature Coast needs to make up some runs now. Shark #12 Alanis Berrios hits down third. Third baseman fumbles around with the ball, throws to first but Berrios is safe. Shark #9 Jr. Jailene Gonzalez steps up to bat and is struck out. Out 1 for Springstead. Shark #15 Jr. Alyssa Kelly hits the ball to second baseman, who in turn tosses to the shortstop covering second and gets Berrios out. Then shortstop throws to first base and takes out Kelly for the double play.

Top of 5th inning
Eagle #44 Jr. Hannah Rizzuto is up and is walked to first. Next up #21 Sr. Mariah Galhouse, a pitch from Kelly was missed by Nature Coast catcher #13 Fr. Kaitlyn Black allowing Rizzuto to advance to second. Galhouse hits the ball just over first baseman’s head to get Galhouse on first and Rizzuto on third. Next up is #6 Jr. Jenna Ryan who hits the ball just over second baseman. Rizzuto makes it home and Galhouse advances to third. Eagle #52 steps up and hits a fly ball out to right field which is caught for out one. Ryan ran to second base, but right fielder throws in the ball to second making a double play. 2 outs. Eagle #10 Brooke Ayo comes up and hits to second, second baseman tosses to first for the third out for Nature Coast.

Bottom of 5th inning
Up for Nature Coast is #3 So. Jiena Carrera. Springstead pitcher #21 Sr. Mariah Galhouse starts the inning with a fast inside pitch. Carrera hits a grounder down first and is out on first. Shark #13 Fr. Kaitlyn Black hits just past second baseman for a base hit. Next up is #6 Fr. Dom Sekelsky who bunts the ball and Black is taken out on second for out 2. Shark #2 So. Alexis Lendo steps up to the plate and strikes out leaving Sekelsky on first.

Top of 6th inning
The Eagles start the 6th with 3 runs against Sharks 1. Eagle #7 Sr. Madison Dicono is the first batter up and pops up out of reach of the shortstop for a basehit. Eagle #26 So. Tiana Stifanic is up and  pitcher Alyssa Kelly throws a wild pitch. Dicono steals second. Stifanic strikes out for the first out of the inning. Eagle #14 Jr. Lourdes Penichet bunts and pitcher Alyssa Kelly takes Penichet out on first for the second out and Dicono advances to third. Senior #3 Emily Kolwicz steps up to the plate, hits to the shortstop who fumbles and Kolwicz is safe on first. Dicono comes in for the fourth run for Springstead. Next up is #44 Jr. Hannah Rizzuto with Kolwicz on first. Pitch is thrown. Kolwicz is stealing second. Catcher throws to second for the out, but no one got there in time to catch it. Center field was there for the backup and Kolwicz didn’t advance to third. Rizzuto hits to shortstop and is thrown out on first for the third out.

Bottom of 6th inning
Up first for Nature Coast is #1 Jr. Morgan Johnson who gets a base hit. Next up #11 So. Arianna Calhoun strikes out for the first out. Senior #12 Alanis Berrios gets up and drives out to left field, left fielder misses and Berrios gets a double.  Johnson comes in for the Sharks’ second run. Next up #9 Jr. Jailene Gonzalez with Berrios on second. Gonzalez tips the ball just enough and is thrown out on first for the second out. #15 Jr Alyssa Kelly hits and gets out on first.

Top of the 7th inning
Is Nature Coast pitcher getting tired or is Springstead just getting some good hits tonight? At the top of the 7th Nature Coast has to hold the Eagles in order to come back to win this game. The first up is Eagle #21 Sr. Mariah Galhouse who hits down third. Third baseman misses, but is backed up by shortstop, shortstop tries to take Galhouse out on first, but she is called safe. Junior #6 Jenna Ryan hits down third for a base hit. So. #52 Raquel Camuglia steps up and hits a double bringing in Galhouse for the fifth run.  Ryan is on third and Camuglia on second. Eagles #37 Fr. Hannah Wistling steps up – she strikes out – out 1 for the Eagles. Senior #7 Madison Dicono hits a fly out to center field, it’s caught giving Springstead two outs as Ryan comes home for the sixth run. So. #26 Tiana Stifanic strikes out, making it three outs.

Bottom of 7th inning
At the bottom of the 7th, Springstead has 6 runs to the Sharks’ 2. The Sharks have to make up runs to tie or win this game.  Springstead’s Pitcher #21 Sr. Mariah Gahouse seems like she is getting stronger and faster in her pitches. Watch out Sharks. The first Shark up is So. #3 Jiena Carrera. She is struck out for 1st out. Next up Fr. #13 Kaitlyn Black, she is struck out for the 2nd out. Next batter up Sr. #10 Kalynn Callari is also struck out making it 3 outs for the Sharks.

Game over, Springstead takes the game with 6 runs against Nature Coast with 2 runs.