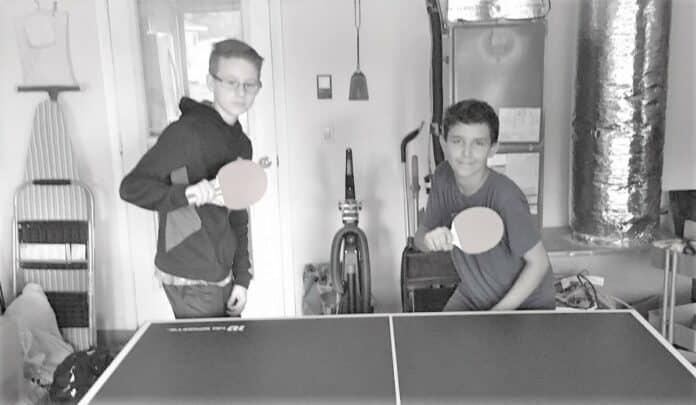 I’ve been playing Ping-Pong (the table was my big Christmas present) in the garage with my youngest grandkids, Spud and Rex.  I looked up the instructions for Ping-Pong on my phone, and from one brief description, I devised my own rules. I then sawed apart a game from the toy aisle at Exwork and made a method for keeping score with flip-up tiles.  (I don’t remember the name of the game, but it had dice.) Also, we use the thimbles and other tiny knick-knacks my wife collected over the years to keep track of who won how many matches.

Our basic game is whoever scores twelve wins a thimble.  But we also play the 7 game: if someone scores 7 in a row to the opponent’s zero, he’s skunked his opponent and gets a thimble.  Because there’s often three of us, we also play the Switch-Off game: regardless of who wins a game, we all take turns until one of us reaches 3 or 5 or 7, depending on how much time we have before I have to take them home.  My favorite is the Two-v-One, in which I play both of them at the same time.

Then there are the technique matches: Triple Paddle and Double Bounce.  Triple requires us to catch the ball with the paddle and bounce it up twice before returning it.  Double requires us to return the ball carefully enough that it bounces twice on your opponent’s side.  Those are slow matches, but we practice control.

Playing in the garage means we have a lot of interferences.  The ceiling fan, it’s light, and the pull strings are often obstacles, as well as the limitations of garage and kitchen doors, both wall-like and in the way behind us at each end, as well as the heater and sundry household devices.  Also, there are the containers of holiday decorations my daughter, Ricochet, has stored here, which are in the way for those racing side shots my grandsons are so clever with. And depending on our choice of paddle-grip (fist bump, handshake, pointer stick, thumb wrap, catapult, or samurai—our terms) there is the occasional phalangial (fa-LAN-gee-al) interference.  That’s fingers in the way, but it doesn’t count. I keep calling “opponent interference!” which means they won’t let me win. I claim it as a privilege of grandfatherhood, but they don’t agree. And quite right.

We quickly developed our own slang for when it seems our paddles have suddenly disappeared, allowing the ball to pass right through.  We proclaim “Hogwarts paddle!” meaning it must be magic, for there’s no other way we could have missed that shot. I believe my paddle is a model from Slytherin, for not only does it disappear at times, but it will also change its angle, sending the ball every which way including right into my face.  And instead of STIGA printed on each ball, it should read WHITE SNITCH, for once they escape play they’re nearly impossible to catch as they bounce and roll away and deliberately hide behind boxes and tubs. The other day we were down to one ball out of a box of 38. After Rex beat me five in a row and won the Owl knick-knack, we spent thirty minutes retrieving balls with our own wand of Muggle magic, the Deluxe Gopher II Pick Up and Reaching Tool.  But we could only find 25 of them. Apparently, 13 have disapparated.

Along that same theme, since our equipment has been cursed or in some other way spelled upon, we’ve tried incantations like “Tabulus Extendium,” to make the table stretch out to bounce a long ball, and “Netum Retracteus,” to make the net lower when we want it to drop out of the way.  Oh, what a fascinating game that would be! But until we can get a copy of the rules for Hogwarts Ping-Pong (and acquire the methods of such magic) we are left guessing, and none of it works. Except apparently the inherent Paxillum Dispareo, which makes the paddle vanish, and we have no control over that.

I’m thinking about getting a pool table.  A standard is less than four hundred bucks.  I used to play pool like I used to play the guitar:  I remember the chords, but the fingers are reluctant.  Still, with pool, I won’t have to compensate my right shoulder with double doses of Glucosamine.  Just need to figure out where to put it. The living room has lots of space. Hmm?